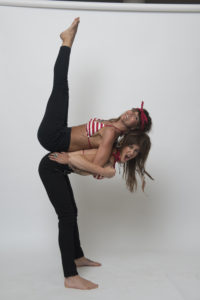 Are your ears jonesing for a sound that they haven’t necessarily heard before? Something that is part Smothers Brothers-throwback and part country-modern? Well, if your answer is “Mmhmm,” then Raelyn Nelson and Hannah Fairlight may have just the thing for you.

Already established on the Nashville music scene by way of their individual musical endeavors, the duo came together to form mmhmm after their personal friendship slowly developed into a creative partnership. Following the release of their self-titled debut in June, mmhmm received criticism for what many deemed the perpetuation of a word associated with hate speech, featured in the song “Lookin’ Like a Tranny Blues.” Both Nelson and Fairlight address the issue here with TrunkSpace, ensuring their fans that it was never their intention to offend anyone. (Read more below.)

We recently sat down with the pair to discuss future holiday happenings, penis-shaped clouds, and why they sometimes second-guess themselves creatively now.

TrunkSpace: We have to say, after listening to your debut, we’d stand in line for a Christmas album by the two of you.
Fairlight: Oh my gosh.
Nelson: I’m writing it on the to-do list.
Fairlight: She’s writing it on the to-do list! It’s happening and you’ll be surprised because we have many a hairbrained idea, but we’ve not thought of that yet and that’s an amazing idea. We’re going to have to give you credit.

TrunkSpace: We’ll be awaiting the festive snap, crackle and pop of the holiday vinyl.
Nelson: By popular demand!

TrunkSpace: Your debut album was released back in June. Looking back, now that you have distance with it, is there anything that you guys would have done differently?
Nelson: I think we probably would have not put “Lookin’ Like a Tranny Blues” on the album.
Fairlight: I agree.
Nelson: We didn’t realize that the word is a taboo word now and that it is linked with hate crimes and hate speech. I know it is used on sites like shemale hd but we now understand that’s ok because the circumstances are different. We definitely don’t condone any sort of hate speech.
Fairlight: We love everybody and we did not intend for the song to be interpreted that way.
Nelson: I gotta say, it was a hard thing to go through with our community, in Nashville, that seemed to turn against us very quickly. The wound is still healing. I think we’re trying to stay far away from that song still.
Fairlight: We had a long process in making the debut and I would say that, every approach to every song was from a storytelling standpoint. 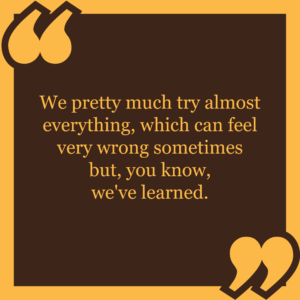 We’re out, we’re active, but I guess we didn’t really get any queues from anybody along the way that the song wouldn’t be…
Nelson: So, we had our CD release party planned at Lipstick Lounge, which is a lesbian bar here in town and we’ve played there many times. We played the song there many times and no one said anything to us that it was considered hate speech. It was a place of ignorance, and to answer your question, we probably wouldn’t have put that song on there had we known it was that…
Fairlight: That racy and that bad, yeah. We just didn’t really even think of it that way at all during the process of making it. Other than that though, we love the way it (the album) turned out. Brad Jones, over at Alex The Great, did a really good job capturing mmhmm with minimal instrumentation and maximum us – comedy and who we are and what we want to put ourselves forward as.

TrunkSpace: There is a great live energy and vibe to the album. Is that something you set out to achieve?
Fairlight: Absolutely.
Nelson: Yeah, you know, everything kind of happened organically with Hannah and I. We were just writing some songs together and then a gig fell in our lap. Funny you mentioned Christmas because it was a Toys for Tots Christmas gig that was offered to us and we had maybe three songs written, so we learned a couple covers and then put the show together.
Fairlight: It started to take shape. The show became the best vessel for mmhmm and when it came time to record… actually, right near the end, we actually talked to Brad about adding the banter that we do our show with, to make it feel like that.
Nelson: We haven’t even talked about putting the bits in there with the next one. Who knows if we will or not, but it was definitely important for the debut one.

TrunkSpace: With the negative feedback you received for “Lookin’ Like a Tranny Blues,” did that make you then second-guess yourselves when writing new material? Are you more aware about what you’re creatively putting out into the world now?
Fairlight: Yes.
Nelson: Yes, I question everything a little bit… racy isn’t the word. What’s the word?
Fairlight: I’ll tell you this, I was on the way here writing a song in my head about falling in love with a gardener and being like the mistress of the house, just ’cause I had passed somebody doing the lawn care and was inspired and had this idea. Coming down the driveway to meet Raelyn here, it feels like… it did enter my head, and it wouldn’t have entered my head before this whole thing, that well, I don’t want us to be branded as an affair-promoting band. You know what I mean? Just weird stuff has been floating into our heads.

Right after that happened, there was a penis cloud in the sky and it took us like 10 minutes to try and caption it because we couldn’t figure out what was appropriate for the penis cloud.
Nelson: And that’s hilarious. Everybody’s going to laugh at a cloud shaped like a dick, c’mon!

TrunkSpace: Society seems so divided and it feels like music should be one of the safe spaces where you can go to a show, stand amongst people you may have nothing in common with, and still all enjoy yourselves collectively.
Nelson: Exactly.
Fairlight: Yeah, I really felt like we had that, sort of, comradery there at Lipstick and also just in our community in Nashville. I think we still have that. I feel like it’s our responsibility now to be the dorky headhunters or whatever, at this new understanding of certain words and moving forward be light-hearted and make fun of ourselves and get back to having fun. We just want to have fun. We want people to have fun. 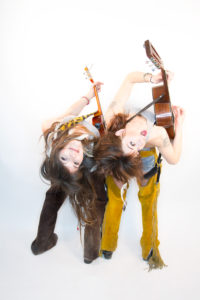 Nelson: That was hard to get back to fun.
Fairlight: We were guilty for putting anything fun up, like the dick cloud.
Nelson: We were just in this grieving mode and it was affecting our families and it was a tough time. On the other side of it, we’ve learned a lot and it bonded us closer, ’cause we felt like it was us against everyone.
Fairlight: It has definitely been something that we didn’t anticipate and for many reasons, I feel like it’s helped us grow as artists and friends and people, so it’s good. Bring it on!

TrunkSpace: You talk about your bond now and just in reading about your story of how you two came together, it felt very much like the “Step Brothers” movie. “Did we just become best friends?”
Nelson: (Laughter) That’s funny.

TrunkSpace: Was there just like an instantaneous connection on a creative level?
Fairlight: I think we both watched each other perform and we started to get a sense of who we both were, but our friendship came first. I think that it was really neat because, I don’t know, probably like a year and a half or so, two years, into our friendship, it seemed like the obvious thing to write songs together, but we just didn’t do it. Then one summer Raelyn had the extreme misfortune of having her house burn down.
Nelson: So, when they were rebuilding my house I was relocated to a house that was about a mile from Hannah.
Fairlight: We were right there and we were at each other’s houses a lot and we started playing shows with a small of group of local female artists and doing these shows together. Off the back of that, Raelyn and I just started writing together, mainly on our porches and just…
Nelson: About things that were happening around us.
Fairlight: It was crazy. We called it the Bad Decision Summer, ’cause we were drinking a lot in response to how crazy it was. (Laughter) Just a lot of crazy stuff was happening and so these songs just kind of came to us. And the sound. And everything. We followed our feet and everything about mmhmm has been like that. We just have an idea and we’re like, “Yeah, let’s try it,” or, “No, absolutely fucking, no.”

Actually there’s no, no in mmhmm.
Nelson: We try it first and then…
Fairlight: We pretty much try almost everything, which can feel very wrong sometimes but, you know, we’ve learned.