Spider-Man was always going to be a sure thing, but developing successful cinematic franchises out of characters like Iron Man, the Guardians of the Galaxy and Black Panther came with question marks attached. Never exactly A-listers in the comics, could they carry their own films? Turns out, they absolutely could, and now Marvel is looking to turn other “could they” characters into “absolutely could” gold.

Premiering June 7th on Freeform, “Cloak & Dagger” tells the story of a teenaged dynamic duo-to-be, newly super-powered and dealing with their own emotional struggles along the way. Starring Aubrey Joseph (Cloak) and Olivia Holt (Dagger), the series promises to add a layer of grounded realism to an otherwise high stakes imaginary world.

We recently sat down with “Cloak & Dagger” star Miles Mussenden to discuss playing the father of a superhero, why his character has been keeping secrets from his fictional family, and the reason fans will want to sit back and enjoy the explosive ride that is Season 1.

TrunkSpace: What does it mean for a career in 2018 to be involved in something within the Marvel Universe? Is it sort of a game-changer just by the nature of how many eyes could be on the series?
Mussenden: You know, I have to say yes. Marvel seems to be taking over the universe right now. With the success of “Black Panther” and “The Avengers,” it seems like everything they touch is gold pretty much. But, with this particular project, I think we have something special with it. I feel very fortunate to be a part of it. So, it’s my biggest opportunity to date and I couldn’t have picked something better.

TrunkSpace: One of the things that Marvel does so well is, although each of their properties exist within the same universe, every one has its own distinct feel and tone. As someone who has worked directly on “Cloak & Dagger,” what kind of show is it? Does it fall within a genre?
Mussenden: It’s interesting because I feel like it’s gonna just touch a lot of different things. What I loved about it is, during shooting, it felt like it was a feature we were filming. It feels like we have 10 little mini-movies, so to speak. You have something for that younger generation, that Freeform audience, that they’ll love with Aubrey (Joseph) and Olivia (Holt) playing Cloak and Dagger, but you also have something more because the family dynamics in both of these young people’s lives play big into this story.

I think it’s something that I would watch, because I look at it, and I think we have just as much gritty things that grab your attention, that holds 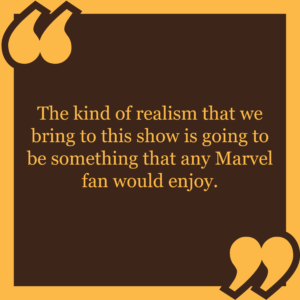 you and makes you care, in the family relationships for Tyrone and Tandy, as do Cloak and Dagger. We have people like Gloria Reuben who plays Adina, my wife on the show, Tyrone’s mother, and she’s just an amazing actress. The kind of realism that we bring to this show is going to be something that any Marvel fan would enjoy.

TrunkSpace: In the series you play the father of hero-to-be Cloak. As a father in real life as well, did you find yourself saying, “How would I react to this if it was happening in my own family dynamic?” Did any of who you are as a parent bleed over into who Otis is as a parent?
Mussenden: Somewhat, because with this particular role it really resonated with me for some reason – from the very beginning. And my instincts seem to be the same instincts as the character, Otis’ instincts, except that Otis is a little bit more controlling and a little bit more buttoned up than I am, personally. But I couldn’t help but have some of it spill over because some of the same fears that I have for my children, he has for his. So, some of the same things that I want to protect my son from, he wants to protect his son from. There is some spillover but because he is different – he, meaning Tyrone – and because my wife is different, we just kind of play and everything’s kind of happening in the moment. I don’t purposely put any of it in, but whatever comes out, comes out, and I really don’t know what I’m going to see because I go and I do what happens, whatever comes to me at that moment, so it’s pretty much… and each take is a little bit different, so it’s the editor who is gonna have a lot of control over what is actually going to come across in the end product.

TrunkSpace: So you must be just as excited to see it as the diehard Marvel fans.
Mussenden: Yeah, exactly. I don’t know what I’m gonna see because even in ADR, they showed, again, very small clips, and so I couldn’t get an idea. I didn’t see the pilot and the stuff they showed at South by Southwest so, yeah, I’m in eager anticipation, waiting with bated breath.

TrunkSpace: Now, within the storyline itself, Otis has a past that he hasn’t exactly reconciled with, right?
Mussenden: I wanna be careful how I frame this – I don’t want to give spoilers. Yes, Otis has a rich history, and he didn’t share it all with Tyrone…

TrunkSpace: Secrets are never good for a family.
Mussenden: That’s true, but sometimes I think, as parents, you want to keep some things away. You’re thinking you’re kind of protecting them by not sharing certain things, but I think everything is due season two so sometimes there’s a time and place for certain things to come out. And I think those things kind of unravel and reveal themselves somewhere in some of these episodes.

TrunkSpace: We know you can’t give away too much, but are aspects of your backstory going to see resolution in Season 1 or will it carry over into any possible future seasons to come?
Mussenden: A major part of it you will see in Season 1. Some very explosive things happen, so I think Season 1 will give fans more than enough.

TrunkSpace: From what we could tell from looking at your filmography as a whole, this is the longest time you have spent with one character, at least in terms of an episode count. What was that extended journey like for you, finding bits and pieces of who the character is along the way, because we would imagine it wasn’t all presented to you at the outset, correct?
Mussenden: Yeah, absolutely. It wasn’t at all. I had an idea after doing the pilot, I knew there was a heavy, emotional demand that would be required, so I went and spent a month, five days a week, working with Susan Batson at her studio, just getting myself emotionally prepared to deal with all the things that this character had to go through. There’s some trauma there. In some ways, he may have some form of PTSD with something that he’s been through, so I had to be able to be emotionally available to give an honest portrayal of these things. I didn’t want to act it. I think it was very important for people to see the realness of it. We see a lot of things happening on TV and the society we live in is a news flash, it comes and goes. We have an emotional feeling about something and then it goes away. But I think that this is going to give people a real feel for what goes on, and even for an African American family… I think we can touch people in a way that they would have a certain kind of empathy because they will live it with us, and I think that was real important. I’m excited about that.

TrunkSpace: From what we could tell, the series definitely seems accessible for viewers. You’re going along for the ride and you’re not necessarily on the outside looking in with these big, larger-than-life hero characters. This is ground level storytelling.
Mussenden: Yes, exactly. and that’s what makes me excited and that’s why I didn’t mind getting it piece by piece, because I felt like I was living it. And just being out there, in New Orleans, I tried to immerse myself in that world as much as I could. Some of the things that my character was doing, I tried to spend my time doing that. So, New Orleans kind of added a whole flavor. It’s like a blanket that we kind of cocooned ourselves in to really create that world.