Thanks in large part to streaming platforms like Hulu and Netflix, television has become a much more diverse landscape in recent years. Not only are there more options for audiences in terms of the types of content available, but the characters being featured in those shows are more representative of our society as a whole.

For actor Mickeey Nguyen, star of the new science fiction hip hop series Utopia Falls, having a hand in the continued momentum of diversifying film and television is something he is very proud of.

“Growing up, I never saw anyone in any of the shows I used to watch that I could relate to,” he said in an exclusive interview with TrunkSpace.

We recently sat down with Nguyen to discuss playing the light in the darkness, wedging Utopia Falls into your Valentine’s Day plans, and why teaching is such a large part of who he is as an artist.

TrunkSpace: Utopia Falls looks wild, and, the kind of series that would have been inconceivable in the world of television 10 or 20 years ago. How exciting is it to be an actor in 2020 with not only the amount of projects circulating at any given time, but the quality of the narrative and character development as well?
Nguyen: First off, it’s such an incredible honor to answer all these questions so THANK YOU for allowing me on here to answer these questions.

Right off the bat, I’m incredibly thankful for the opportunity to be part of such an amazing project. It’s one of a kind and R.T. Thorne, our director, is such a humble envisionist that bringing his craft to life was a true honor. He wanted to achieve the first performance-based science fiction show that would appeal to a modern audience of diverse, multicultural and socially-minded young adults, and I’m proud to say that we’ve done just that. Not only that, but what really took my heart was now being able to be part of the momentum of diversifying film and television. Growing up, I never saw anyone in any of the shows I used to watch that I could relate to. I had ONE favorite of mine, and it was the Yellow Ranger. I’d always get made fun of because, at the time, it wasn’t normal for a boy to like girl characters. But it was so much deeper than that, and looking back at it now, I was truly inspired by her because she was someone who looked like me and, at the time, barely anyone else on my screen did. Oh yeah, and also because she was badass. Fast forward to NOW, there have been some magical movements in this industry. We’re progressing, and I’m happy that there are such a variety of diverse casts on multiple shows today. Utopia Falls now being of them!

TrunkSpace: Utopia Falls is a new series without a pre-existing brand backing it up. As an actor on the project, do you carry any stress with you wondering – hoping – that it will find an audience or do you try not to focus on those things that are out of your control?
Nguyen: I think as an actor, or as any creative artist, you have to train yourself to not put that kind of burden on your shoulders. Everyone has their own personalized taste and some people will like certain things that others don’t, and that’s okay! Utopia Falls is SO unique and one of the most engaging projects I’ve ever worked on in my career. That is more than enough for me, and the rest of the Utopia Falls family, to put our utmost passion and integrity into this.

TrunkSpace: For those who are excited about diving into Utopia Falls when it premieres on Hulu February 14, can you walk us through your character Mags and what you love most about getting to play him? 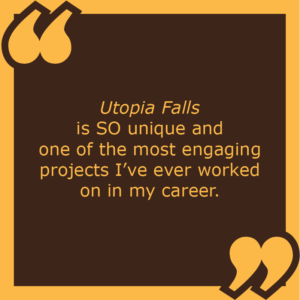 Nguyen: Mags. Is. Everything. He is such a light, and with a series like Utopia Falls, you need someone like Mags to uplift the story because trust me, you’re already in for a wild ride. He’s bright, colorful and such a caring person to those around him. He’s made to be a comedic person, but he digs so much deeper than that and I feel like you’ll really see him blossom into a lot more. I loved playing him because he ended up being VERY similar to me, despite his ambition and hunger for fame. His traits and humor are really dead-on to mine and sometimes it’s quite scary how much I might actually be Mags in real life. He also loves eating excessively and yes… it’s another trait we share.

TrunkSpace: As we said, the series premieres on February 14 – Valentine’s Day! That’s a lot of pressure for those with significant others who also want to get our binge on! Can you give us some advice on how to best make our loved ones happy AND watch the show the night it premieres?
Nguyen: I mean, have a cute candle-lit dinner at 6:00 PM sharp. Leave the dishes, and proceed directly to the couch and get comfortable. The first episode is where you’re going to be introduced to a brand-new world and a new society, so you need to be fully ready – mentally, physically and emotionally. After the first episode, you’re going to want to watch the second – and then the third, and so forth. Then you’ll have finished the entire series and look! You’ve just spent all this quality time together! You now love the show and you now love each other for a night well spent in each other’s arms.

TrunkSpace: For fans, the final product of a film or series is always the most memorable part, but for those involved in a project, we’d imagine it goes much deeper than that. For you, what is something about your time working on Utopia Falls thus far that you’ll carry with you through the course of your life/career?
Nguyen: I think I’ll carry the everlasting inspiration I got from everyone on the show. They’re ALL so talented and driven that it gives me this constant breath of appreciation for this career. The long-lasting relationships and memories that we’ve all made together and the challenges that we all faced are really what created this family bond with one another. I remember at the last week of wrap, I gave everyone a parting gift and I think I cried for each and every one of them when I gave it to them because really, they became such incredible people in my life and I’m happy to carry this bond with me through the course of my career.

TrunkSpace: Beyond acting, you’re also a dancer. Chicken or the egg question… what came first, dancing or acting? Which love served as the seed that would eventually germinate into a career?
Nguyen: I actually started off dancing first. In my high school years, I always had a love for dancing and it later became the original career that I was pursuing. Acting was never really in the picture until I was on a World Tour with Lilly Singh as one of her dancers, and someone reached out to me about an audition for this untitled show that was casting an Asian male lead who had a singing/dancing background. I didn’t think too much of it, and felt like I didn’t really have a good chance because I was traveling overseas. But the universe worked its magic and I somehow ended up landing it on what soon became Nickelodeon’s Make it Pop. That was the birth of my acting career where I fell in love with this world of artistry. I’m grateful that even when I jumped the gun and pursued acting full-force, I was able to still keep my love for dance in my life, which would later help me on my other projects like Disney’s Zombies and now Utopia Falls! 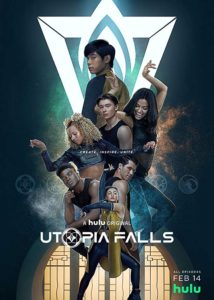 TrunkSpace: You teach dance as well. Is there pressure in helping to shape the next generation of performers that come through your studio doors? What kind of teacher do you see yourself as?
Nguyen: I love teaching. It’s one of my passions that I will always have an everlasting love for. I don’t feel that there’s this pressure to shape the next generation of performers because I’m always feeling so rewarded with the amount of love from hard-working students that come and learn from me. My goal is to thank them with everything that I know about this industry because, ultimately, they are the ones that have given me the opportunity to teach them. I see myself being the kind of teacher that is more inspired by the students than they know. I learn as much from them as they learn from me. They are the ones I admire, and will always consistently be proud of them no matter what.

TrunkSpace: Where are you hardest on yourself as an entertainer and how do you overcome those self-critical insecurities?
Nguyen: We’re always our own worst critique. Always aiming to be perfect. I think prior to achieving thick-skin in this craftsmanship, I was very hard on myself about what I couldn’t do that I never really gave myself the appreciation for the things I COULD do. In the end, this is a form of art. You have to be patient and allow yourself to make mistakes and experience them so you learn not to make them again. Allow yourself to do the best you can do and appreciate what you give as the outcome. No one is here to judge your process, so why should you?

TrunkSpace: What has been the highlight of your career as a whole thus far?
Nguyen: As cliché as it sounds, it has been my family. They have honestly been the backbone of my entire career, and I’m happy that I can provide for them, especially for my mother. She is such a strong human being and the most caring person in my life. To take care of two kids after my father passed away must have been the biggest challenge of her life, and she did it so flawlessly. The true highlight of my career is being able to give back to her for all that she’s done for my sister and me. Even through the toughest times, she was able to raise us to become who we are today.

TrunkSpace: Time machine question. If you could jump ahead 10 years and get a glimpse of what your career looks like a decade from now, would you take that journey? If not, why?
Nguyen: I wouldn’t. I feel like I need to experience my career as a whole with no shortcuts. I’m sure, and I have faith, that my career will have sprouted into a successful one in the next decade, but in order for it to be one, I would have had to experience the journey there. The ups and downs, the good and bad – that’s what will take us all there. Be ready! We’re all set out to do some incredible things.