Crafting one of our favorite albums of 2018 thus far, Michael Rault has created a modern-day classic with “It’s A New Day Tonight,” a 10-song masterpiece of vintage rock sounds and lyrical narratives reminiscent of breezy summer days. The Montreal-based singer/songwriter set out to construct a record that could be spun on a turntable and absorbed front to back in a single sitting. He has done just that, and in the process, has left a musical longing within the listener for more.

We recently sat down with Rault to discuss music’s therapeutic qualities, how “It’s A New Day Tonight” is an album about the subconscious, and why he needs to start sleeping with a dream journal.

TrunkSpace: Your new album, “It’s a New Day Tonight,” drops in just a few days. What emotions do you juggle with in your head as you gear up to release new material to the world?
Rault: Oh, a lot of different feelings come to the surface. There’s a little bit of anxiety, a little regret, but mainly, I’m just really excited. It is intense finally letting go of something you worked on for so long, though.

TrunkSpace: We read that the album sprung from a period of creative dissatisfaction. Are you someone who tends to hit walls creatively and then needs to refuel the tank? Do you find yourself taking breaks from music?
Rault: I don’t take very long breaks from music. I tend to take breaks from writing. Sometimes, it can be too much to keep squeezing the toothpaste tube once it has given all its got. I find that practicing instruments and learning songs keeps me in a state of expansion so I can avoid getting stuck in my writing.

TrunkSpace: The album as a whole feels like more than just a collection of songs. There is a cohesive vibe to it – a sense that it was crafted like an album from the ‘70s where each track to track transition was important to the journey of the listener. Did you set out to create more than just a package to wrap your songs in and how much thought was put into the order of the songs themselves?
Rault: At the beginning of the whole thing, I was just writing and trying to come up with enough material to fill a new album. At some point, I noticed there was a theme emerging, and I definitely pulled a handful of songs out of the pile and thought “these ones go together.” A bunch of tunes that might have been pretty good on their own just couldn’t get included, because they didn’t mesh well with what had become the core of the record. We fully tracked eleven songs, and had one other partially done, and once we had finished tracking and got into mixing, we eliminated one of the tracked tunes and opted for one of the other songs that seemed to fit the vibe better. After everything was mixed, Wayne Gordon (my engineer and co-producer) and I definitely put a bunch of work into sequencing the record. It was important for it to sound good when somebody put it on their turntable and listened to each side all the way through. 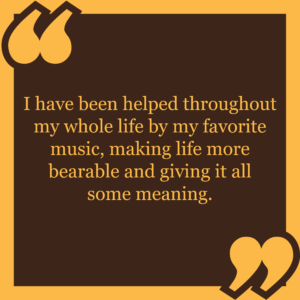 TrunkSpace: We know the title comes from a hockey pre-game interview, but we found something very music-focused in it, at least from our perspective. Music has the power to impact people in profound ways. Someone can be having a rough go of things and then put on their favorite record and then WHAM, they’re viewing things differently. Essentially, a bad day can become a new night. Yes, we took a long way to get here, but have you experienced a moment where a fan shared how your music impacted them directly and do moments like that help fuel your desire to continue forward with your career?
Rault: Yeah, definitely! Occasionally, someone will message me and say that my music has made them feel better in a hard time, and that’s encouraging to me. I have been helped throughout my whole life by my favorite music, making life more bearable and giving it all some meaning. I also find that working on my own music can give me insight into my own emotional life, and connect me with my inner life in a way that can have a positive impact on my day-to-day experience. I think you are right, that is the more true meaning of the album title. Although it did come from a hockey player’s awkward pre-game interview, the title itself meant something different to me, which is why I wrote the song.

TrunkSpace: What does “It’s A New Day Tonight” say about who you were as an artist at the time of its inception and have you already moved on creatively and found a new headspace to approach your writing from?
Rault: I am moving on. It is interesting to finish a huge project like this and see how certain ideas or concepts that have been in central positions in your mind for so long start to fade away. I find myself being attracted to different bands and genres and songs after drawing inspiration from other areas for so long when I was gathering ideas for this record. I’d say that “New Day” is a record about the subconscious, and maybe was my way of dealing with some things that I was unaware of. It seems to me like it was a more intimate album than anything I had done before, but also simultaneously was this sort of impersonal fantasy about being a rock and roll star in the sense that the sounds were so heavily based in this classic rock aesthetic. So, it seemed like it was both unglamorously personal, and fantastic at the same time.

TrunkSpace: Do you write primarily from experience or do you take a more storyteller’s approach to your lyrics?
Rault: The most recent thing I’ve been doing is writing subconsciously, and I guess that is something I’ve done since I started writing in my teen years. I try to just let things run their course and sometimes a song just comes out lyrically well-formed. Other times, you need to edit it and do more work on it to bring it together. I guess that makes the songs pretty personal, but in a way they also don’t seem like they are necessarily direct representations of what is going on in my life. It’s more like a reflection of my personal experience, but maybe through a fun house mirror or something. It comes out different on the other side, if it is working right.

TrunkSpace: We love great music, but within great music we are particularly drawn to great lines, the kind that make us curse the universe for not having come up with them ourselves. What is a favorite line of yours that you have written and why are you proud of that particular snippet?
Rault: That’s hard to say. I feel like some of my older material had some better one liners that I could just pull out and quote here. As far as this album goes, one of my favorite little lyrical snippets was from “Sleeping & Smiling,” when it goes “all the days run together like colours in my mind, leaving me looking through a blur, til it’s so hard to see through as dark as night and I wish that things could be just as they were…”, I liked the imagery in that line.

TrunkSpace: Sleeping and dreaming were two themes you focused on while writing “It’s A New Day Tonight.” Are you someone who can shut off the creative brain or are the gears always turning? Do you wake up with a need to jot down lyrics or concepts for songs?
Rault: I sometimes do wake up with ideas, and I often times decide that it isn’t good enough to get out of bed and find a pen for. I think I need to start sleeping with a dream journal / notebook type thing on hand. I wouldn’t say that there are just always great ideas pouring out of my skull, though. Only occasionally something comes up unprompted.

TrunkSpace: Where are you hardest on yourself as an artist?
Rault: Everywhere. (Laughter) I need to be better about that.

TrunkSpace: Finally Michael, if you could sit down and have a conversation with 16-year-old you, would he be happy with the artist you have become today?
Rault: I think so! I’m guessing 16-year-old me would have a pretty good perspective on the amount of work present day me has done to improve and expand my skills and such. I also think I still share a lot of core interests with 16-year-old me, but I bet there would be some musical tastes that I have developed that I wouldn’t have liked at all at that age. It would definitely be a trippy encounter.

“It’s A New Day Tonight” is available May 18 on Wick Records.