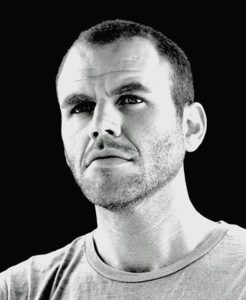 With a new season underway and Dr. Jonathan Crane bringing terror to all of those he faces, the inhabitants of “Gotham’s” fantastical world are finding themselves once again wondering why they have yet to relocate to a less chaotic city. Smack dab in the middle of the mayhem is new cast member Michael Maize, whose interaction with Crane’s Scarecrow in the first episode of the season helped set the stage for the frights and fights to come.

We recently sat down with Maize to discuss how much he enjoys playing in the comic book sandbox, the fun of exaggerated performance, and why he still talks about his demon-horned past.

TrunkSpace: Generally anything comic book related comes with a rabid fandom. Are you prepared for whatever the “Gotham” fandom will throw at you now that you’re a part of the universe?
Maize: Yes, I love it. I’m ready for that. I wasn’t into comic books per se growing up, but I was a huge comic book film fan growing up. I loved the whole Superman series, and then I loved the original Batman trilogy from “Batman,” “Batman Returns,” and “Batman Forever.” I was a huge fan of that, and I always had a great love for the high concept that went into those films, which then started to get carried over into the television stratosphere within the last decade. So, it’s really exciting, and after doing “Iron Fist” last year, I was always hoping I would somehow get involved in “Gotham.”

TrunkSpace: You mentioned some of the earlier films from the super hero genre and what’s so great about “Gotham” is that 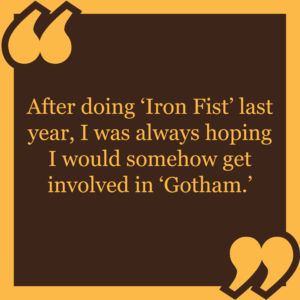 it is a bit of a throwback and feels more like those than the grittier, hyper-realistic adaptations of today.
Maize: Yes, I completely agree, and I actually feel that, in general, that has been the atmosphere of where the films have been going with the last Batman movies and some of the newer Marvel movies. And, in my heart, I really love the high concept comic book entertainment that really pushes the edge of reality, and pushes the edge visually and takes you to a whole other realm. Like, for instance, “Iron Fist” was very grounded, cool, real, and it was great to jump into that realm, but from the first second that I stepped onto the “Gotham” set, there was an immediate difference with, just, the colors and the energy. You’ll see where my first scene is and where that takes place, and you just feel all of a sudden that you’re inside of this crazy universe. And it was really easy as an actor to tap into that energy and then use it for my performance.

TrunkSpace: You mentioned the colors and energy you felt stepping onto the “Gotham” set, but we have to imagine that Scarecrow costume helped set the stage as well. We’ve seen lots of iterations of the character on screen over the years, but this one in particular seems to hit the terrifying mark.
Maize: It does. The first second that he walked on set, I was definitely terrified. That’s a super-cool scene. I was so happy they used that in the trailer because you’ll see in the episode that everything goes off into very exaggerated realities, as we’ve been talking about, and then when you finally get to that scene, it’s just really grounded in the truth of, “Oh my God, what is really happening here? This villain is greater than I thought he was!”

TrunkSpace: You mentioned the exaggerated reality of “Gotham.” Does that allow you as an actor to take a different approach to performance than you would in something like “Iron Fist” or “Mr. Robot,” which are both more grounded in reality?
Maize: For sure, and I would say the extreme of that would be “Mr. Robot” where I walked onto that set and there was a very obvious mood and energy going on, which was extremely understated and, yes, based in reality. I had watched season 1, and I was in love with season 1. I thought that it was one of the best pilots I had ever seen, and I loved that mood. I loved the tone. It was almost flaccid, then there was this energetic heartbeat under it all that kept it going. So, I really tried, with that role, to stay completely understated, but always have this drive underneath me that was bigger than what was on the surface.

With “Gotham,” I’m a fan of the show, so I know the contents of the show and I know that it is more outside-the-box. Like I said, when I walked on the set there was that energy and you could immediately see the conceptual style in front of you, and it did really drive me. It was so much fun because, although I love playing many different characters, and I love diving into the skin of very reality-based characters and how they think and feel and not having to show too much but just be in that moment, I very rarely get to push the realms toward big, or bigger than life. With “Gotham” I really felt like it was no-holds-barred and I could just go and be a little more exaggerated and play with the tone, and play with the beat, and play with the people in my scene. I really enjoyed it.

TrunkSpace: Without giving too much away, can you tell people about where your character Grady falls into things?
Maize: He is part of Merton’s gang. Merton is the leader of the gang and I’m his right-hand man. Grady has a past connection to Jonathan Crane, a.k.a. the Scarecrow, and that connection is what propels us forward into the next episode. It’s the encounter with the Scarecrow that moves me forward as a character more than anything else.

TrunkSpace: You have appeared on many shows that have pretty incredible fandoms, but what people may not know is that you were a part of one of the original modern day television fandoms, the Buffyverse.
Maize: I was. I was in “Angel,” which I still talk about today because I wore this crazy prosthetic piece that covered from my forehead up, and I had two horns. That character was named Artode and he was a crazy lizard man of sorts. That was a super-fun and exciting show to do.

And I was in “True Blood” for a bit and that also had a wonderful, big fan base. And actually, “Power Rangers in Space.” We’re going way back in my resume now.

Maize can be seen next in Syfy’s “Happy” with Christopher Meloni.