Coming from the daily grind of network soap operas, McKenna Roberts learned what it takes to be a working actress at a very early age. Still only 11, she has since graduated from her “The Young and the Restless” roots to become Dwayne Johnson’s daughter in “Skyscraper” and the 10-year-old version of Zendaya’s character Rue from the new HBO series “Euphoria.” Those are both big roles to fill, and she has gone on to do so with a level of confidence that reaches well beyond her physical age.

We recently sat down with Roberts to discuss on-set lessons, the challenges of taking on characters, and the type of reality show she would one day like to appear on.

TrunkSpace: From Dwayne Johnson’s daughter in “Skyscraper” to the younger version of Zendaya’s Rue in the new HBO series “Euphoria,” you are certainly surrounding yourself with successful talent early in your career. Are you looking at each project you work on as just as much of an education as you are a job?
Roberts: Absolutely! It’s been a tremendous learning experience. Every job I’ve worked on, I’ve taken something from it and put it into other roles and auditions.

TrunkSpace: You spent a number of years working on “The Young and the Restless.” Soap operas are known for their breakneck production schedules, and in a way, that must be a great boot camp to learn from. What is a lesson that you took from your time on the series that you’ve carried with you through the rest of your career thus far?
Roberts: I learned that you need to be on your game – meaning, making sure you know your lines, paying attention to what camera is taping, and at the same time, you want your performance to be on point because they move very fast.

TrunkSpace: As mentioned, “Euphoria” will air on HBO, which is a network that actors of all ages are vying to do work with. 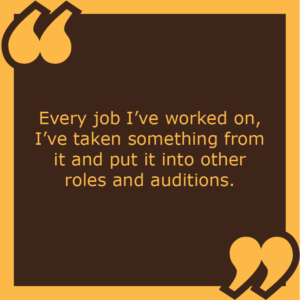 When you step away and look at your career from an outside perspective, do you feel like each opportunity has led to the next opportunity, and if so, where do you hope to go from here?
Roberts: Yes, I do think that each opportunity in my career has and probably will continue to lead me to something even greater! I loved that I can add HBO to my resume.

TrunkSpace: In “Euphoria” you play a young Rue. Did you work with Zendaya to pick up the little details of the character – the physical stuff – so that when the audience sees her at 10-years-old, the who of Rue lines up with the where she came from?
Roberts: No we didn’t do that, and I think it was because the beginning experiences Young Rue went through were on a much different level than the Older Rue. And as she got older, her life went into a much darker place.

TrunkSpace: As a performer, is there more pressure involved bringing a character to life when, within the same series, someone else is also breathing life into the same character? Does it become a bit of a collaboration in that regard?
Roberts: I really didn’t feel any pressure because that’s what I’m used to doing with every character I have played in my career. It was just more of a challenge if anything, but I was happy with my work and I wanted to make sure the director was too.

TrunkSpace: What are you most proud of about your time spent on the series?
Roberts: I felt like my role was challenging and I thought I did a good job with my character, and I was just super happy I got to play a younger character that Zendaya was playing.

TrunkSpace: Aside from your acting work, you’re also a model. Do you view both as two separate careers, or extensions of the same career?
Roberts: I do see them both as separate careers for me. But a lot has changed since I started modeling and there are a lot of opportunities that can be tied into what’s going on in my acting career if the timing is right.

TrunkSpace: From what we understand, you like to bake/cook in your spare time. What is a food-related show that you wouldn’t mind being a contestant on and why?
Roberts: Well, the funny thing is that a few years back, I actually auditioned to be on a food-related show called “Master Chef Junior.” I auditioned for it twice and got really close one of the times. So, being on a show like that, or maybe a celebrity baking challenge show, would be really cool.

TrunkSpace: What has been the highlight of your career thus far?
Roberts: The highlight of my career has definitely been working on “Skyscraper” with some incredible people in the industry like director Rawson Marshall Thurber, Neve Campbell, Dwayne Johnson and many others.

TrunkSpace: Time machine question. If you could jump ahead 10 years and get a glimpse of what your career looks like a decade from now, would you take that journey? If not, why?
Roberts: Even though that sounds super cool, I wouldn’t want to time travel to see what my career looks like because I think it would ruin the fun and excitement of what’s to come for me – and I’m happy with how things are going for me now!