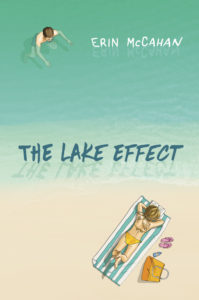 This time out we’re chatting with Erin McCahan to discuss her new novel “The Lake Effect,” why she didn’t want to be forced out of her shell as a child, and how she’d edit her own dreams if she could.

TrunkSpace: Your new book “The Lake Effect” was released on July 11. What emotions do you experience as you gear up to the release of new material?
McCahan: I try not to gear up for the release. I’m serious. Between my expectations and anxiety, it’s too nerve-racking to think about.

TrunkSpace: As you look back over previous releases, where do you think you have grown the most as a writer with this latest offering?
McCahan: In not gearing up for the release.

TrunkSpace: YA is a term that is thrown around quite a bit these days and it seems the actual definition of it blurs based on who you ask. In your opinion, what does YA mean and who is the audience? (Not necessarily age demographic, but the profile of the reader.)
McCahan: It is a little blurry, isn’t it? At its most basic level, I suppose YA is defined by the age of the protagonist. Teen protagonist, in general, equals YA. But the audience for YA is broad. It encompasses everyone from middle schoolers to grandparents, and I think that’s because, over the last 15 years or so, the quality of YA books has improved and the diversity has broadened.

TrunkSpace: It seems that more than anything, one area that is a major turn off for young adults is when they feel like they’re being talked down to and not treated as the young adults that they truly are. How important is honesty (and particularly emotional honesty) when writing in the genre?
McCahan: It’s paramount. I was repeatedly told, as a teenager in the midst of some crisis or restlessness or even happiness, “That will change when you get older.” What I heard was, “Your feelings don’t count right now.” In my work with teenagers – for 10 years as a youth minister and now as a young adult author – I diligently try to honor teenagers’ feelings and experiences.

TrunkSpace: We read that you were very shy growing up. As a shy child, how important did losing yourself in literary worlds become during those years?
McCahan: Reading was a breather. Only other shy people will understand this – it’s hard to be shy. Add to this that parents and teachers – at least my parents and teachers – treated shyness like a disease that they were going to cure by “bringing Erin out of her shell.” So in addition to living in an extroverted world, I felt further burdened by the belief that there was something wrong with me. It was a relief to be home, alone, after school, in my room reading – or listening to music – and not having to think about my own horrendous failings as a shy person for a while.

TrunkSpace: For those young adults of today who are also experiencing similar feelings, what advice would you give them? 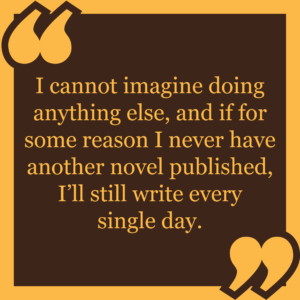 McCahan: Shyness is a temperament, not a character flaw. You’re allowed to be shy.

TrunkSpace: You were born in Michigan and were raised in Ohio. In your opinion, how much of where a writer comes from influences their literary voice? How did Ohio shape your writing?
McCahan: I think it’s more family dynamic and social environment that shape not just a writer but everyone. And a huge chunk of my family is – uh – I’ll say difficult. Dysfunctional is the polite term. In need of a map, a compass and a Sherpa to lead them back to normal. They would have been that in any state.

TrunkSpace: Regarding the process, is writing a labor of love for you or does it feel more like labor? Do you enjoy the process?
McCahan: It is absolutely a labor of love. I cannot imagine doing anything else, and if for some reason I never have another novel published, I’ll still write every single day.

TrunkSpace: And what does that process look like? What are the ideal conditions for putting in a good day of writing?
McCahan: A good day is a productive day, and not every day is productive. Some days, I sit at my desk and write, delete, write, delete with very little worth saving. Other days, I write pages and pages and hate to quit in the evening. The only part of the process that is consistent is that I am at my desk, from 9 to 5, 5 to 6 days a week, with breaks for working out or running errands or playing with my cats, of course.

TrunkSpace: Do you self-edit as you write?
McCahan: As I write, as I think, as I speak. If I could do it as I dream, I would.

TrunkSpace: Where are you the hardest on yourself as a writer?
McCahan: I struggle with the belief that I’ll just never be good enough. And since I haven’t actually defined ‘good enough,’ I worry it’s an unknowable and unattainable standard.

TrunkSpace: What are you working on now and what will people be able to read next?
McCahan: I’m working on a couple things, and I would love to tell you about them, but I haven’t run either of them past my editor yet. She’s on maternity leave, and I think I need to discuss them with her first.

“The Lake Effect” is available now from Dial Books.

Tags : between the sheetsEric McCahanfeaturedI Now Pronounce You Someone ElseLove and Other Foreign WordsThe Lake Effect