The scope of television has changed dramatically in recent years. Nowadays every new series is more ambitious than the last. Hulu’s latest offering “The Looming Tower” is no exception.

Based on the book by Lawrence Wright, the 10-part miniseries spotlights the events that may have inadvertently lead to one of the most tragic days in the history of the United States, 9/11. Starring Jeff Daniels, Peter Sarsgaard, and Alec Baldwin, the drama zooms in on the counter-terrorism divisions of the FBI and CIA and puts a human face on those who were unable to steer the country away from disaster and how that failure directly impacted them.

We recently sat down with Mark Hildreth who plays FBI counter-terrorism agent Gordon Wright in “The Looming Tower” to discuss the flawed heroes found in the series, why there always needs to be some creative license taken when dramatizing a real life event, and how he had a hand (or voice) in one of the most underrated Saturday morning cartoons of all time.

TrunkSpace: Before we get into the meat and potatoes of why we’re chatting today, we have to mention… we were pretty excited to see that you were a part of “Camp Candy” back in the day.
Hildreth: (Laughter) You know that show? That’s so funny.

TrunkSpace: Not only do we know that show, but we’d go so far as to say it had one of the greatest opening theme songs of any cartoon of the 80s.
Hildreth: And one of the greatest actors! I never met John (Candy) when we were doing that because we weren’t recording in the same place. He was somewhere else or he was working on something.

That’s funny. Thanks for saying that. I did a lot of that stuff – a lot of cartoons, especially when I was a little bit younger. We’re going back to the 80s now. Holy shit.

TrunkSpace: We’ll flash forward to the present and your current project “The Looming Tower.” With everything that’s happening in the world of politics here in the States, it seems like a very timely project.
Hildreth: Yeah. It definitely takes a very sober look at what was going on around 9/11, and how we in the U.S. were involved and were part of that whole scenario. I think what people are going to find probably the most moving about it is that it takes a look at it in a really human way. It really centers around Jeff Daniels’ character, who is the head of the comparatively small FBI counter-terrorism unit, back where it starts around 1998. Small compared to now because now it’s massive. And Jeff played it beautifully. We worked together a bunch, and it really gets into his character. He’s a flawed hero.

It’s not like “The Looming Tower” is going to paint the Americans as some kind of, speaking of the 80s, 80s superhero who has no warts at all. It also really gets into the humanity of those guys, and what it is they were up against, what they were dealing with, which they obviously didn’t even realize in some ways. 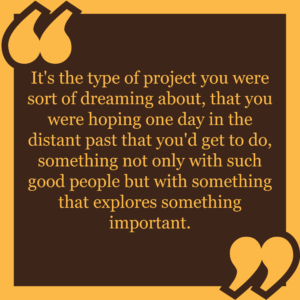 TrunkSpace: In many ways, it’s a road map of how we got to where we are today.
Hildreth: That’s right. It gets into the history of the whole situation, which goes back obviously decades before 9/11 actually happened. It doesn’t pull punches. I wouldn’t necessarily say it’s a dark project because it actually has a lot of humor, and like I said, a lot of humanity, but it doesn’t pull punches about how we got ourselves there.

TrunkSpace: Is there a certain level of delicate handling with material like this even when it’s being dramatized, not only because of the nature of the story but because the people you’re spotlighting were in fact real people?
Hildreth: Of course. We had some of the guys who were there on set with us. In fact, some of the guys who were actually there worked on O’Neill’s team, Jeff’s character’s team. They were actually in some of the scenes with us. Obviously it’s a dramatization, and I think there’s always that when you’re making the “based on a true story” movie. It’s still a movie. There are certain liberties taken for the sake of telling the story.

There was a lot of reverence on that set. And I gotta say, Jeff Daniels is as much of a pro as anybody I’ve ever worked with. It’s always the guy who’s number one on the call sheet, the guy who’s the star of the show, who always sets the tone, whether they know it or not. Jeff is such a laid back guy. He’s a good ol’ boy. He’s a Michigander, he’s a blues musician, he’s just got such a deep soul that guy, and that’s the tone that was on set. It was set all the way down from the producers to the directors. And we have some of the best producers and directors working in the business making the show. These are people who are very thoughtful. This is not tabloid television. We took the subject very seriously, and I hope with a lot of compassion for all the people who were involved on every side.

TrunkSpace: Having those guys in the scenes with you must be such a great tool for ensuring that, even though dramatized, you’re getting the tone and energy of the room right?
Hildreth: I had a moment where we were working on one scene and we were all sitting around a boardroom with Jeff’s FBI team. It was my first day on set and Jeff has a team of six or seven FBI counter-terrorism officers, which I’m one. We’re shooting this scene and we go to lunch. We’re sitting around a table in there with a couple other actors, and we’re talking with this one guy who is sitting with us, and he’s like, “Oh yeah, this was like this, that was like that, can you believe this is now this way.” He was kind of, you know, shooting the breeze about the content of the scene. The guy starts talking like, “Oh yeah, of course, this was like this, that was like that…” and I was like, “Wow, he knows a lot about this.” So then he’s like, “Yeah, when John O’Neill said that to me…” and I was like, “Uh, what? What did he just say?” I didn’t even realize he was actually one of the guys who was there in that room that we were dramatizing. You stop and you go, “Wow, this is a person that actually lived through it.” It brings a level of authority and honesty to the series. 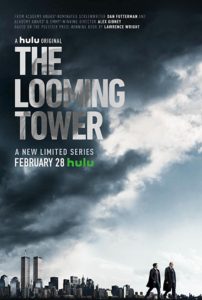 TrunkSpace: And is your character Gordon based on a real person?
Hildreth: My understanding is that my character was sort of an amalgamation. His story is basically that he is a former Top Gun pilot who has graduated into this role in the FBI, and there are a few characters like that where we created an amalgamation of different people who might have been there to be able to show the different sides – the different ways that people were dealing with this. That is the human side of how this all went down. It’s easy to see when you think of the FBI, the CIA, as like a bunch of guys – men in black who are not real people. These are people. These are people with lives, with families, with emotions, with their own personal biases. That’s what “The Looming Tower” gets into, I think, in a really moving way, is how the human beings who were doing their best to deal with the reality of the situation back then failed, and how that turned into 9/11.

TrunkSpace: We started this conversation talking about “Camp Candy.” When you first started your career, especially in television, could you have ever imagined a show like “The Looming Tower,” with a cast and creative team involved like it has, existing as a series?
Hildreth: I guess there was a Golden Age of Television, so I’m not sure what this is. The Platinum Age? I’m not sure. It’s a real good time for TV. I’m not that old, so I sound a little bit out of place putting it this way, but we used to talk back in the old days, like in the 80s, about how it was like a pipe dream. Like, “Imagine if we didn’t have to wrap everything up in a half hour or an hour? Imagine if we could have a show that went on and on, and instead of making a two-hour movie, you could make a 10-hour movie, or a 22-hour movie?” That seemed like a far-off possibility, and now not only are we making serialized dramas and series like “The Looming Tower” where you get to really delve into it, into a story, and really get into the nitty-gritty of what goes on with the characters in a way you never did before, we have some of the best actors in the world working on television.

Getting to work with Jeff Daniels, Alec Baldwin, and Peter Sarsgaard… and we have producers Danny Futterman and Lawrence Wright who wrote the book that “The Looming Tower” is based on, a wonderful writer… it’s such a privilege as an actor. It’s the type of project you were sort of dreaming about, that you were hoping one day in the distant past that you’d get to do, something not only with such good people but with something that explores something important. It’s great.

Hildreth can next be seen opposite Christina Ricci in the Lifetime movie “Nellie Bly,” set to premiere later this year.