No one is more excited for the new action/adventure series “Blood & Treasure” than star Mark Gagliardi’s inner 10 year old. A lover of art who also enjoys spectacle, the “Drunk History” and “The Thrilling Adventure Hour” alumni jokes that he makes career decisions based on what his younger self would think is cool, but when you’re standing in an Egyptian tomb rigged with booby traps, anyone who grew up watching Indiana Jones crack his whip in exotic locales would be hard pressed not to want to jump in a time machine and tell themselves that dreams really do come true.

We recently sat down with Gagliardi to discuss quoting “The Princess Bride,” the need for the who, and why he likes to tell people he’s starring in a new adventure series for the Columbia Broadcasting System.

TrunkSpace: As a performer, do you feel pressure for a project to succeed? Does any of that come back on you with something like “Blood & Treasure,” which premiered last night?
Gagliardi: Yeah, of course it does. Everything I do, I want people to enjoy. I’m not going to create a show and be like, “Oh, man, people are going to hate this one.” I want it to go really well. I’m nervous about it because it’s a big show. It’s a big deal for me personally because this is my first time having a part this size on a show, and I personally love the show. It’s a show that I would watch anyway were I not involved. It’s very much up my alley, so I just hope people enjoy it as much as we did making it. We had a blast making it, and the whole time, we’re assuming people will love this show, because obviously we love having a great time, and we all love each other. We’re traveling all over and having this amazing experience, so hopefully that translates.

TrunkSpace: If it’s a show that you would watch if you weren’t involved, what would 10-year-old Mark think about you starring on a show like this?
Gagliardi: Man, I’ve thought about this so many times. First of all, one of my favorite movies is Disney’s “The Kid,” where Bruce Willis meets Spencer Breslin, who plays little kid Bruce Willis, directed by John Turteltaub… who directed “National Treasure,” so it all comes full circle.

TrunkSpace: And that’s coming from a guy who’s already voiced Batman, so 10–year-old you has already handed out some high fives!
Gagliardi: Yes! Oh, man, I called 10-year-old me when I got the Batman job, too. He was really pumped.

That was a fun job. That was one of those where the first thing my voiceover agent said to me when she called me was, “Here, sit down. I have something cool to tell you.” So the fact that she knew, “Holy crap, it’s Batman!” was really awesome.

TrunkSpace: With so much content circulating today on so many different platforms, do you think a network like CBS feels less pressure for something to become a hit right out of the gates? Does “Blood & Treasure” have more wiggle room to build an audience now than it would have had 20 years ago?
Gagliardi: Yeah, I think that we have the benefit of a huge, major network, and a great lead-in, the “NCIS” season finale. So, yeah, I think there are so many screens now, and there is so much content now that you 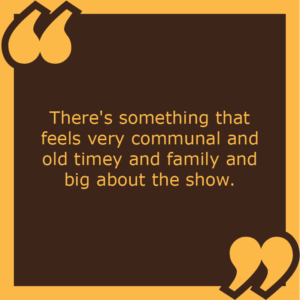 have a million choices of what to watch and where to watch, and there is some amazing television that is doing amazing things. “Game of Thrones” broke a million barriers. “Fleabag” now is a new one that is breaking all these molds. There are a lot of really great “break the mold” television happening, and I think one thing that CBS does really, really well is what we are doing… big, old school television for as broad an audience as we can make it for.

I like referring to them not as modern day CBS, and it annoys my friends, but I call it The Columbia Broadcasting System. That sounds so big and old timey to me. “I’m doing a new adventure program on the Columbia Broadcasting System.” It sounds like, “Hey, everybody, gather around your radios.” There’s something that feels very communal and old timey and family and big about the show.

TrunkSpace: And it also has that summer movie feel to it. With that said, is it no accident that it’s getting its run now in the summertime?
Gagliardi: No accident at all. We actually talked a lot about it while we were making the show that what we were making is a summertime adventure. It’s the book that you read on the beach that’s a little lighter. Maybe you’re on vacation, and you’re going to splurge and get the big meal instead of having the healthy salad. We knew going in. One of our great directors on the show – Steve Boyum is his name – and after every take – I’m paraphrasing because I don’t know if you swear in your publication – but after any great take, he would always say, “That’s the big movie stuff right there!” And that’s how we knew he had gotten the take that he wanted.

TrunkSpace: You’re kicking off the Summer TV season!
Gagliardi: Yeah. I like the idea that we’re beginning the summer movie season with a television show. That feels fun and groovy and subversive. Because any screen can show you anything now. I watch movies on an iPad before I go to sleep, so you can find a giant blockbuster popcorn story anywhere. I think that’s great. I think it’s fun.

Summer movies have always been my favorite season. I’m a huge Marvel MCU fan. I loved the “Lord of the Rings.” I love any big, epic thing. There’s a reason that I’ll go and see whatever giant, splashy Broadway show is opening because I love art, but I also love a little spectacle.

TrunkSpace: Well, and going back to 10-year-old Mark, that’s the kind of stuff that first draws us in.
Gagliardi: Exactly. There’s a reason that people cosplay at ComiCon in the costumes from the epic, fun, over-the-top stories. And those are the stories that always sang to me as a kid, and still do as an adult.

And one thing I love about the show is everybody involved in this show was high-fiving 10-year-old themselves in some way. We live in a world on this show where Indiana Jones movies exist, and Marvel movies exist, and we quote them, and we all watch them, and these are characters that nerd out for them. One of my most fun experiences reading a script for this was when I’m reading a script for an episode, and at one point, I quote the “Princess Bride.” I was like, “Oh, my God, I am quoting the Princess Bride. This is the greatest adventure show of all time.” 10-year-old me got a high five.

TrunkSpace: The most memorable thing for the viewer is always the end product, but for those involved it must go beyond that. What are you going to carry with you through the rest of your life and career from your “Blood & Treasure” experience?
Gagliardi: Two things. The smaller of the two being that… I’ve always wanted to be an actor since I was 5, from watching the behind the scenes footage for “Temple of Doom” and watching behind the scenes footage for “Never Say Never Again” when I was a really little kid, and seeing these giant movie sets with all the big cameras and lights and everything. I thought, “Oh, that’s what being an actor is,” which I, of course, have learned through the years that it’s not quite just that. So that’s why I say that’s the smaller of the two for me… walking into a set that is a huge Egyptian tomb with missing sarcophagi… that is evocative and fun. They’re blasting smoke, and there’s guys one ropes rigging booby traps. It’s this crazy thing.

But to me, I think the more important is… I had an acting teacher once tell me, “A story is a who, a what, and a where, but it’s always about the who.” That’s the heart of your story. And I think that this show in particular, for me as an actor, getting to meet and work with everybody who is playing at this level, and is still the kindest people in the world… we all just fell in love with the work and each other while we were doing this. I think that’s something for a TV show, too. I think we can fill it with explosions, but unless the audience cares who gets blown up, it doesn’t matter. So I think that what’s going to sustain the show is some really, fun, cool characters that I’d love to hang out with in real life.

TrunkSpace: This is a business with no certainties. With that said, sometimes the things we don’t plan for are the ones that are the game changers. What has been the biggest surprise of your career?
Gagliardi: I think there have been so many experiences in my career that I didn’t know at the time that they were going to send me on a trajectory. At first, this was an audition. I audition for a lot of different things. This is one I was particularly excited about because I read the script and loved it. So I really stuck to my gut on this audition.

Several years ago… things had started off small that just got progressively bigger, and I had no idea that that would happen… I did a little show at M Bar in 2005 called “The Thrilling Adventure Hour” that became this juggernaut podcast over the course of 10 years. We had movie stars guest starring in it. We were sold out, and we were adding shows, and we went on tour to Australia and New Zealand. So that was a huge thing that changed my life forever.