Animated Disney movies are enjoyed generation after generation, over and over again. For example, our parents watched “Cinderella” in the 1950s, and then we watched it in the 1980s, and now our kids are watching it in a different century than when it was produced. That timeless, evergreen viewing experience is not lost on 10-year-old Madeleine McGraw, who plays Bonnie in “Toy Story 4,” set to hit theaters on June 21.

“I almost can’t wrap my head around it,” she said in an exclusive interview with TrunkSpace.

We recently sat down with McGraw to discuss how she reacted upon learning she had been cast in the fan-favorite franchise, being a part of the Marvel cinematic universe, and the kindness of her “pretend dad” Patrick Fugit.

TrunkSpace: We are huge fans of the “Toy Story” movies because there is always something for everyone in them – both kids and adults alike. Were you a fan of the movies prior to being cast, and what was your first thought when you learned that you’d be playing Bonnie?
McGraw: I was five when I booked the role of Bonnie and I had definitely seen all three “Toy Story” movies. I loved them so much! We used to drive from Northern California to Southern California a lot and I would always bring all three movies for our drives. I remember when my mom and dad told me I booked Bonnie. I ran around our house screaming! I was so excited.

TrunkSpace: Bonnie is a character who was previously established in “Toy Story 3” and then appeared in a few of their holiday specials as well. Were you nervous taking on a character who had been voiced by a previous performer? Did you have the freedom to make her your own in this latest installment? 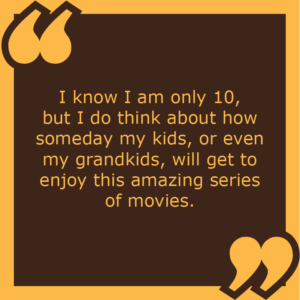 McGraw: When I first got the audition they were definitely looking for a voice match. I listened to the talented Emily Hahn and realized Emily and I sounded similar. I wouldn’t say I was nervous, but I didn’t want to disappoint anyone, especially Emily. You get very attached to a character you work on for such a long time.

TrunkSpace: Disney movies like “Bambi” and “Cinderella” are more than 70 years old but are still enjoyed by kids today. Is it cool knowing that your work will be watched by people for generations to come?
McGraw: Oh my goodness… YES! I know I am only 10, but I do think about how someday my kids, or even my grandkids, will get to enjoy this amazing series of movies. I almost can’t wrap my head around it.

TrunkSpace: What was the most enjoyable aspect of getting to play Bonnie in “Toy Story 4?”
McGraw: Well, I loved getting to work with Josh Cooley (director) these past four years and I hope to work with him and Jonas Rivera (producer) again and again. They were always super supportive. I also loved getting to record at the Pixar Studios in Emeryville. It was like an extension of Disneyland. I didn’t want to leave.

TrunkSpace: Without giving away any spoilers, what are you most excited for people to see when they sit down and watch “Toy Story 4” when it hits theaters on June 21?
McGraw: I can’t wait for everyone to meet Forky and watch his adventure with the original toys.

TrunkSpace: The franchise is one that always gets plenty of merchandise tie-ins, including toys. What is it like seeing a toy based on a character that you portrayed on the big screen?
McGraw: I don’t know if they will make a Bonnie toy, but I was incredibly lucky to voice a car in “Cars 3.” I played Maddy McGear. (Named after me – Maddy McGraw.) Having a character named after me was probably one of the most incredible things that has ever happened to me. Then when I saw the cute die-cast Maddy McGear car, I cried. It was a really special moment.

TrunkSpace: You also appeared in “Ant-Man and the Wasp,” portraying a young Hope Van Dyne. With the recent release of “Avengers: End Game,” what does it feel like knowing that you were a part of such a huge, international success as the Marvel cinematic universe?
McGraw: It definitely doesn’t feel real. But it does feel incredibly special. I am a HUGE Marvel Fan! My brothers have their whole room decorated in Marvel stuff. My pretend dad from “Outcast,” Patrick Fugit (we are still super close), his awesome wife, Jenny, and my whole family, always go to see all the Marvel movies together. It was so cool to take him to see “Ant-Man and the Wasp.” The whole Marvel experience is something I will never EVER forget! I still can’t believe I was a part of it. So grateful!

TrunkSpace: Another project that you starred in with a comic book connection is “Outcast.” Are there any characters from the world of comic books that you’d like a chance to play in the future?
McGraw: Playing Amber Barnes was such a gift. Robert Kirkman is, well, a genius. So if he came up with a new comic book character that I could play, that would be awesome. But honestly, I love Marvel so much, it would be an honor to play any of them.

TrunkSpace: What has been the highlight of your career thus far?
McGraw: Well, the highlight for me would definitely have to be all the amazing people I have met. Some of my closest friends and mentors in my life I have met because of acting. My friend Megan Park (“The Secret Life of the American Teenager”) has been such an incredible friend and mentor to me. She cast me in her directorial debut and she keeps casting me in just about anything she can. Besides directing and acting, she is such a gifted writer. I admire her so much. Meeting her and having her in my life is definitely a highlight. Same with my pretend dad from “Outcast,” Patrick Fugit, he is one of the coolest people I know. I had a tough audition recently and I asked my mom to call him and see if he could help me. He totally made space in his day to help me out. So meeting him has also been a huge highlight.

TrunkSpace: Time machine question. If you could jump ahead 10 years and get a glimpse of what your career looks like a decade from now, would you take that journey? If not, why?
McGraw: No, I would want to experience the journey as it comes. I wouldn’t want to ruin the surprise or work any less hard. I like having goals and working to reach them.