Chilling Out is where TrunkSpace talks all things horror and genre with those who work on the projects that give us the thrills and chills to keep coming back for more. This time out we’re chatting with Trevor Macy, a prolific filmmaker and co-founder of Intrepid Pictures. Macy has served as executive producer on films like “The Strangers,” “Safe House,” and “Ouija: Origin of Evil,” as well as producer on “Oculus,” “Hush,” and the soon-to-be-released “Gerald’s Game.” His latest film is “The Bye Bye Man.”

TrunkSpace: How did you get involved in The Bye Bye Man and what can people expect?
Macy: The project came to me a few years ago… I want to say 2009… in the form of a short story by Robert Damon Schneck called “Bridge to Body Island.” “Bridge to Body Island” is part of an anthology called “The President’s Vampire: Strange-but-True Tales of the United States of America.” And what struck me about this particular chapter in the anthology was that it came with a warning, which is, for those who fear obsessive thoughts or are particularly skittish, don’t read this chapter. “And by the way, this is told to me by a friend who holds it forth as true events.” So I thought that was pretty interesting. And what was in the short story that was super compelling was this concept of a villain who comes to you if you think or say his name. That acts as a beacon and it draws him to you.

TrunkSpace: Which is sort of a familiar concept for those who grew up with the classic childhood tale Bloody Mary.
Macy: I’d be happy to be mentioned in the same sentence with Bloody Mary or “Candyman,” you know? (Laughter) But what’s interesting about “The Bye Bye Man” is that he sort of seeps into your cracks. The only weapon he needs to hurt you is you. He can see your worst fears and pervert your worst intentions, so it bespoke terror in a way. He’s going to make you hallucinate based on what you fear the most or what he can get you with and that’s what he feeds off of.

TrunkSpace: It’s sort of the even more terrifying version of the famous line from “A Nightmare on Elm Street,” “Whatever you do, don’t fall asleep!” But here, he can get you at any moment.
Macy: Right. The comedic version of that is that if I tell you not to think of pink elephants, what are you going to do?

TrunkSpace: The actor portraying The Bye Bye Man is Doug Jones, a sort of modern day genre icon. How important was casting the main villain?
Macy: I need to start this and end it by saying how much I love Doug Jones as a person because I think the guy is just an incredible human being. More importantly, professionally, he has, I think, such an extraordinary… my friend Mike Flanagan with whom I’ve also worked with and also worked with Doug… says that Doug has more acting talent in his little finger than most actors do in their whole body. What he means by that is, a lot of his characters only can emote with expressions and movement. Not only is he extraordinary at doing it, but he’s extraordinary at doing it usually in a lot of make-up and prosthetics.

TrunkSpace: Which is interesting because a lot of people probably don’t even realize that he has been behind so many iconic characters over the years.
Macy: Right. I showed my 6-year-old daughter “Hocus Pocus” the other day and because Doug has been over to our house and she’s met him, I was like, the zombie… Bette Midler’s ex-boyfriend is played by Doug Jones in that movie. Doug’s been everywhere! (Laughter)

TrunkSpace: And that’s got to be a great position for him to be in because he’s had such an incredible career for years, and yet he can probably still walk down the street and just be Doug Jones.
Macy: Absolutely right. I can’t wait to work with him again. He’s super talented and just a pleasure as a human being. It’s weird actually, to have somebody play… I mean, he can turn on the performance in such a way that he just exudes fear. And for someone who is such a warm, caring person, it’s a fascinating skill.

TrunkSpace: Would “The Bye Bye Man” have been a different film had it been a different actor in the role?
Macy: That’s a good question. I mean, I don’t think there’s another Doug Jones running around the world. So yes, because of his performance, I think it would have been different. Story-wise, because it has antecedents, it would have certainly seemed like the same story, but I believe Doug really elevates it. 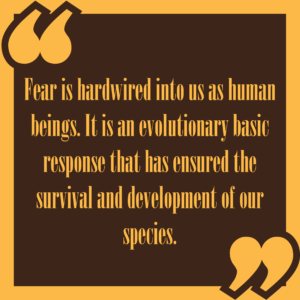 TrunkSpace: Many people have been predicting the demise of the theater-going experience for a number of years now, and yet one of the tried and true success stories for Hollywood remains the horror genre. Why do you think the genre continues to resonate with audiences?
Macy: Fear is hardwired into us as human beings. It is an evolutionary basic response that has ensured the survival and development of our species. Moreover, as it pertains to the theatrical experience, fear like laughter, is better shared. I have often said to people, “Please don’t watch “The Strangers” or “Hush” at home alone by yourself because you might call and be pissed at me the next day.” If I do my job as a filmmaker and it feels real and relatable to you, it’s still once removed. And so, you get to share that experience and I don’t think that’s ever going to go away.

TrunkSpace: Fears have many layers as well, which makes them something everyone can relate too. Not everyone will be afraid of the dark, but those who are will be, and those who aren’t may be afraid of what’s hiding in the dark. They can share the experience without having the same fear.
Macy: That’s exactly right. That’s well put. The unique thing about fear is that it really sparks the imagination. I think good scary movies allow you to do that work as a fan and audience member. I mean, I can think of a few images that maybe lived up to my imagination in cinematic history, but the thing is, most of what any audience member creates is scarier to that individual person than anything you can put on the screen.

TrunkSpace: Which is why a lot of fans of the genre always point to the source material when it comes to the adaptation of books because they already have an unattainable visual in their head for the monster, villain, etc.
Macy: In engaging the audience, it’s really important to let them fill in some blanks. That’s why I don’t really favor… I’m going to call them “jump scare fests.” When you puncture the tension it’s fun and some of those movies work, but really it’s about the build and letting that tension play. I think most of the movies I gravitate towards working on… that’s something they share.

TrunkSpace: Horror films are at their best when you can’t track them and you are caught completely off guard. One of those moments that worked so well comes from your film “The Strangers” in the scene where Glenn Howerton’s character is wrongly identified with very grave results. Was that a moment, even during filming, that you thought would catch audiences by surprise?
Macy: Well that’s a funny one because I think we won on two fronts with that. Some people were like, “oh no, oh no, oh no, oh no,” and the other people were like “what, what, what, what.” (Laughter) So depending on how you perceived that moment, I think it kind of works either way. That’s not a common thing to be able to say about a moment like that, but I think that was a fun one.

TrunkSpace: And what’s cool about that scene, and particularly for Glenn, is that it’s such a small role, but it had such a big moment and impact in the film and with audiences.
Macy: Because of where and how he comes into the film, you imbue him with so much hope. (Laughter) Anything his character does is kind of heightened. And it’s always fun to mess with people that way if you can. I mean, I think they like it. (Laughter)

TrunkSpace: By having a moment like that, you give the audience hope and then take it away, putting them in a position to then question that anything is possible moving forward.
Macy: Yeah, that’s true. It’s an interesting balance though. You kind of always have to keep it grounded and relatable. “The Strangers” wasn’t obviously supernatural, but even when you are dealing with supernatural elements, you kind of have to keep it in the chute so that people… you want them unsettled. If you cross over into the point where anything is possible, then a lot of people lose interest and I think rightfully so.

Trunk: Is that why you think “The Strangers” worked so well with audiences… because it could have been anybody in any house?
Macy: Well, one of the great things in Bertino’s script, and which became one of the great things in Universal’s campaign (because I think they picked up on this aspect of the movie as much as anybody), was that it was because you were home. That instantly makes it relatable and chilling in a very concise way. So I think the answer to your question is yes.

TrunkSpace: There’s been talk and speculation for a long time about a sequel to “The Strangers.” Is that something fans can expect in the near future?
Macy: Well, your lips to God’s ears. I hope so.

TrunkSpace: Is there pressure for you as a filmmaker to make the “scariest movie in years” every time out and knock it out of the park?
Macy: One always wants to knock it out of the park. (Laughter) I think, in a sense, scary is in the eye of the beholder in how a movie comes together. What I feel pressure for is… are we making something fresh and interesting, are we making something that is going to grab people, and are we making something that is going to stay with them when they leave the theater? People can decide what becomes a classic and what doesn’t, but I think if you can do those three things, then you’re on great footing and the movie can succeed on its own terms.