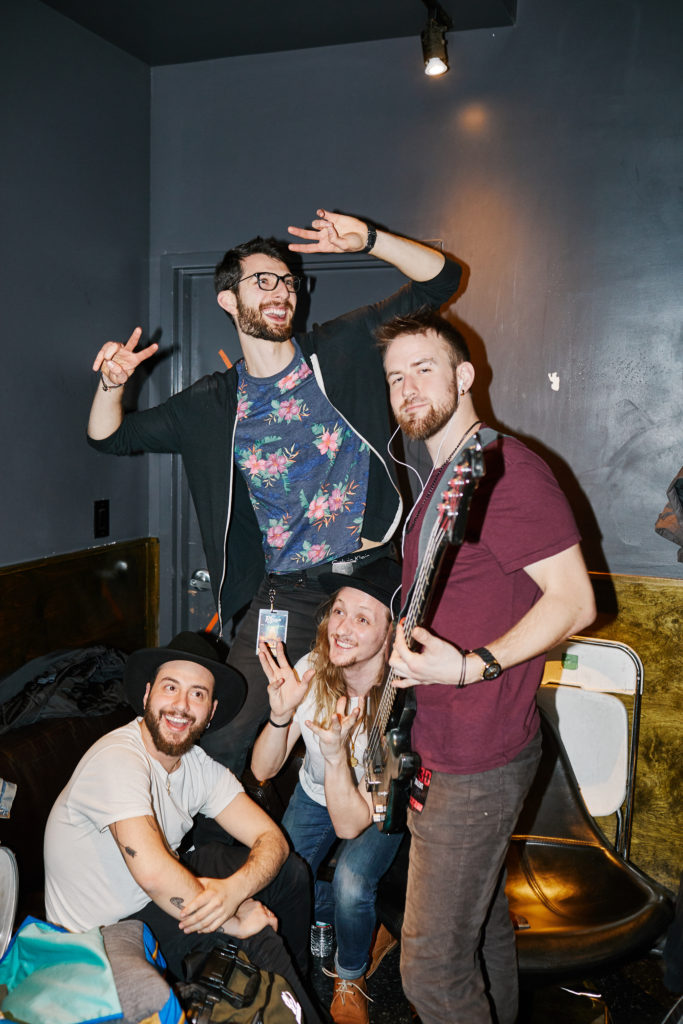 TrunkSpace: How would you describe your music?
Los Elk: Ah, the classic question. Ironically, also one of the hardest. In a nutshell, we write Indie Rock tunes that pull deep influence from the melodies and rhythms of Funk and RnB. That said, any song or artist that a band member has on blast is fair game to melt into the songwriting process. Between the four of us there is a tornado of inspiration ranging from classic jazz to hard trap. The soundtrack of our travels jumps from Flatbush Zombies to John Mayer, from the latest J. Cole record to the deepest Red Hot Chili Peppers cut there is. Overall though, our songs reflect who we are as people, and right now that means high energy performances filled with jumping, dancing, sweating and some ratchet debauchery.

TrunkSpace: Your music is crafted in such a way that it’s difficult to NOT want to get up and dance. How interactive are your live 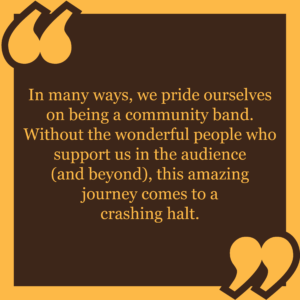 performances with fans working their bodies to the rhythm that you’re putting out there into the world?
Los Elk: In many ways, we pride ourselves on being a community band. Without the wonderful people who support us in the audience (and beyond), this amazing journey comes to a crashing halt. Attending a Los Elk set will never mean watching some jaded musicians going through the motions. We’re putting our lives on the line with this shit, and performances are the battlefield. When people choose to spend their precious life moments watching us do our thing, we honor that sacrifice by giving it everything we’ve got. We let the energy of the room naturally lead certain aspects of the vibe, so no two shows are the same. Who knows, if the energy is lit enough, it may be the night that we literally take off all our clothes and crowd surf face down. Hah! Kidding (maybe), but you know what we mean.

TrunkSpace: Just in listening to your music, there seems to be a diverse list of genre-based influences that play a part in your particular sound. It’s hard to define Los Elk, even in a day and age where there are so many sub-genres of music. Is that something that the band takes pride in, being able to bring a little bit of everything to the fold and still making it all work sonically?
Los Elk: Absolutely. As we mentioned before, there is a constant barrage of new influences working their way into the songwriting process. If Bondi has been listening to a lot of D’Angelo, he’s going to want to lay down a thick pocket groove. At the same time, Slam might shred a West African-influenced guitar melody because he’s been jamming to the Niger artist, Bombino. The same goes for Moose and Nash with whatever is heavy in their rotation. Of course, this is simplified description of the actual process, but the result is a crazy mashup of soundscapes and vibes that melt into a completely new creation. It’s a huge reason why we all love Los Elk. As long as it grooves and can theoretically make sense, nothing is off the table.

TrunkSpace: The band released the single “Dèjá Voodoo” back in late 2017. What’s up next for Los Elk as far as the studio is concerned?
Los Elk: We’re planning to re-enter the studio this summer and record a three-song EP. Until it makes sense to dive into recording our first full length album, we’ve been digging three-song EPs. It’s enough to sink your teeth into and get a sense of where the band is musically, but it’s also not an overwhelming amount of material that requires vast budgets and huge timelines. We have so many songs that can currently only be heard at a live show, and we’re trying to change that.

TrunkSpace: You recently returned from a tour with Ripe. Does being on the road allow you guys to approach music from a different POV, because in many ways, you’re getting to step away from the day to day of life to focus entirely on music, correct? Does the band get any writing done while on the road?
Los Elk: Being on the road is a completely different way of living. How and when you eat, sleep, shower, change, relax… everything changes. Suddenly the only mission is the next show. Even when it’s a travel day and you’re spending 10 hours in a car, you’re doing it for that next show… that next opportunity to really connect with someone and bring the heat. Writing definitely happens on the road, but in two different ways. One is literal, in which you break out your instruments and give it a go. The second is more macro, in that you’re accruing all these crazy experiences and moments that will feed into the songwriting one way or another.

TrunkSpace: The band came together at Skidmore College back in 2011. When you look back, how has the sound changed the most since those early days together? Where have you seen (or heard) the most growth?
Los Elk: It’s been a long journey since Skidmore. In many ways, you may say that our sound has become more refined. The purpose behind our playing, and goals as a band, have become so much more focused since graduation, and the music reflects that. Back at school, we had no idea what Los Elk would become or what we wanted it to become, for that matter. You just need time to figure that all out. Looking back on old footage and recordings from the very early days is a total trip. There’s a frantic energy surrounding the whole thing, almost like the abundance of residual energy surrounding the explosive birth of a new entity, like the BIG BANG. As time moved forward, that frantic energy became more focused and refined, laced with purpose and passion. We’re no longer a college band, and we’ve got a hell of a lot more experience under our belts to bring to the table. 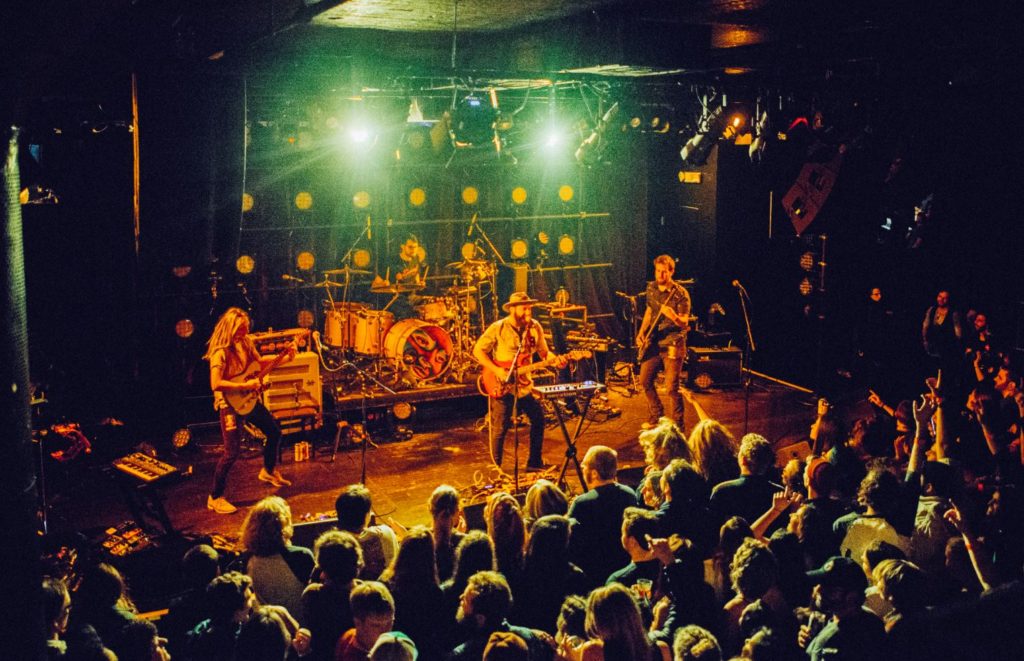 TrunkSpace: Is there something creatively inspiring about working within a band atmosphere? Does the creative drive of each individual member fuel the unit as a whole?
Los Elk: Being in Los Elk is like being in a four-way marriage. Except nobody is sleeping with each other. At least, not like that. Being in a band means coming together and attempting to do something larger than life. It requires immense sacrifice, self growth, and the ability to lay individual desire to the side for the vision of a greater good. This is where the idea of “laying our lives on the line” comes from. There are no promises in this industry. It’s almost like placing a bet in a casino. Our wager is the incredible amount of time, energy and sacrifice put forth into this one thing. The potential payoff is entrance into an incredible way of life, in which we are able to do what we love every day. So, do ya feel lucky, punk?

TrunkSpace: We love great music, but within great music we are particularly drawn to great lines, the kind that make us curse the universe for not coming up with them ourselves. What is one of your personal favorite Los Elk lyrics and why?
Los Elk: Oh, man! We know the feeling. Of course, people are going to be drawn to different lyrics depending on how their life has unfolded. You have the current pleasure of chatting with Bondi, and one of my favorite lines comes from the chorus of our song “Hands.” It asks, “Who are you, where’d you go? Used to know but now I don’t // Are you better are you worse, was I a gift was I a curse? // Are you filled with regrets, do you still smoke cigarettes? I want to know.”

There are no right or wrong interpretations of song lyrics, but, to me, this chorus digs at the existential curiosity of how we affect other people’s lives. We become so deeply connected with people, and then for whatever reason, they are removed from your life in that way. At the end of the day, you can’t help but wonder how you may have changed their lives… for better or for worse.

TrunkSpace: What can fans expect from Los Elk for the rest of 2018?
Los Elk: We’re constantly trying to push the boundaries, and do the next big bad thing. In addition to getting back into the studio and releasing a new music video for “Deja Voodoo,” we have some incredible shows and festivals booked. We’re particularly excited for our hometown show in Boston on May 19th at the Paradise Rock Club. We’ll be supporting our good friends in Lawrence, an incredibly talented band we’ve shared bills with in the past. We encourage everyone to connect with us on our socials so that we can stay in touch and see what you goons are up to.