Fans of “Orange is the New Black” were recently introduced to Gerard Lobo in the latest season of the Netflix prison dramedy when it premiered earlier this month. Playing a nurse named Adarsh, the New Jersey native slipped into the scrubs of a good guy in a world mostly populated by individuals operating somewhere in the gray. Prior to joining the streaming powerhouse, Lobo also appeared on “The Blacklist,” “Powerless,” and “Unbreakable Kimmy Schmidt.”

We recently sat down with Lobo to discuss how his “Orange is the New Black” role grew into more than he expected, why a letter he wrote to himself inspired his acting career, and how a turn in “Master of None” altered his path as a performer.

TrunkSpace: You did a seven episode run on one of the hottest series going in “Orange is the New Black.” Did you view the role as what could be a career changing moment for you?
Lobo: Honestly, I don’t know. I hope so. Anything that begets work is great. I’m just happy that I had the experience to work on that show. I’ve been lucky enough to work with the different actors that have their own stories… the leads… and they were amazing. It was a very, very welcoming set. Everyone from production to the talent were amazing. I really can’t say anything bad about the show. They were awesome.

TrunkSpace: For those who have yet to binge the new season, where does your character fall into things?
Lobo: I don’t believe I can allude to too much, but I can say that he is involved with things…

God, what can I even say? I’m not even sure.

TrunkSpace: Being an actor and coming into a show that has that amazing storytelling pedigree that other series are striving for must have been pretty exciting?
Lobo: Absolutely. When I first booked the role, it was only supposed to be two or three episodes and then they just kept calling me back. Just being thrown into situations like that, and for the most part it was with three or four different characters that had different storylines, it was kind of cool in that respect. I’ve watched the show and I’m a fan so being on set and seeing someone who you’ve been a fan of and have been tracking their story and then being thrown into a scene with them was kind of unrealistic.

TrunkSpace: It must have a bit rattling coming onto a set that has its established relationships and tone and essentially being the new kid in school.
Lobo: Oh yeah. Are you kidding? When I booked it I was like, “Oh my God!” It was only supposed to be a few episodes and they kept calling me back and my agents would be like… and I can’t really tell them necessarily what the story is and I don’t even know. It’s not like they said they were going to call me back in two weeks and that I’d be playing something. It was just, “We want him 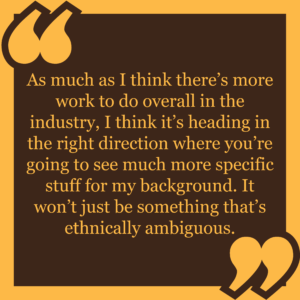 back and here are his scenes.” And I was like, “Oh my God… this is happening!” (Laughter)

TrunkSpace: So as the character moved forward, was it bringing you to places from a performance standpoint that you didn’t expect when you landed the job?
Lobo: Yeah. I think I started realizing that this guy is going to have an arc. A lot of times with supporting actors, you go in, you do the best you can and you leave because there’s not a lot of time in regards to the nature of production where you have the time to be like, “What’s the background on the character and what’s his motivation?” You have to kind of do it on the fly. You have to make it up. And if it works it works and if it doesn’t it doesn’t. You really just have to serve the scene. So I think what helped with all of the nerves was that every time I got a scene I was like, “What if they’re going one way with this or what if they’re going another way?” and then I was like, “I just have to do my job.”

TrunkSpace: You’ve worked on network TV series like “The Blacklist.” Obviously you’ve worked with Netflix given “Orange is the New Black.” As an actor, is it an interesting time given all of the content that is being produced, especially knowing that so much of it is so character-driven now?
Lobo: Definitely. For someone like me, I’m very lucky. I got into acting about eight years ago and I think that just with the nature of Netflix and different online providers that have now become household names, there are a lot more opportunities. I’ve never necessarily had to play very stereotypical roles. As much as I think there’s more work to do overall in the industry, I think it’s heading in the right direction where you’re going to see much more specific stuff for my background. It won’t just be something that’s ethnically ambiguous. It will be like a Bangladeshi person, which is good.

TrunkSpace: So many actors nowadays are not just relying on acting alone. They’re developing and producing material that they believe in and essentially creating work for themselves thanks in large part to those various platforms that are now available. We know that you’re a writer so is developing and producing something you anticipate doing as your career moves forward?
Lobo: I think down the line. Right now my major focus is really just training, auditioning, and booking roles. The more I learn about the industry in tandem with doing my own writing, eventually something can come to fruition.

TrunkSpace: You mentioned getting into acting about eight years ago. What has that journey been like for you in terms of where you started to where you are today?
Lobo: You know, I was always afraid to pursue acting. When I was going through some life changes, I had to ask myself, “What is it that I really want to do?” I always wanted to pursue acting so I started taking classes at night. I remember my first teacher, JoAnna Beckson, she did a 10 month Meisner course and she had us write a letter… the eight of us who were in the class. People were taking 10 or 15 minutes to write their letter and I just wrote two things. I wrote:

To see whether acting is something I want to do for the rest of my life and to book work as an actor.

(Laughter) Those are the two things that I wrote and then I kept on looking back on that every year. Predominantly I think the first focus was just on training, to be able to jump in and do things. I started with theater and loved that and then started booking some student films and enjoyed that. Then some roles here and there on commercials and it snowballed into bigger roles now.

TrunkSpace: So as your career started to come into focus and you started landing those bigger roles, what was the one that changed the landscape for you and started opening additional doors?
Lobo: I would say “Master of None.” I saw the breakdown and it was, “In-shape Indian guy who is down to Earth and loves working out.” I was like, “If I don’t book this, I don’t know what the hell I can do.” (Laughter) So, I went in and it was such a fun audition. And again, I don’t know if it’s something with Netflix but it was one of the most welcoming sets. Aziz and Alan Yang were amazing. They were so funny. That was a great experience. I was just so happy that I got to do it and then when it got the reception that it did… it could not have gone any better.

TrunkSpace: And you appeared on yet ANOTHER Netflix show in “Unbreakable Kimmy Schmidt” where you played a character with possibly the best/worst credit name ever… “Douchebag.”
Lobo: (Laughter) That was a lot of fun. And again, I don’t want to sound like a broken record, but an awesome crew and awesome cast. My scene was with Titus and he was great.

TrunkSpace: Looking over your acting resume to date there’s a nice mix of both comedy and drama. Do you find yourself being pulled to one genre more than the other? Is there a certain type of actor you want to be?
Lobo: Honestly, I’m still figuring it out. Every single role that I get is new, whether it’s comedic or the same character in different episodes. I’m just happy to work on it every single time I get the opportunity. To say that I really gravitate towards comedy or that I really gravitate towards drama… and this is going to sound kind of like an actory answer, but there’s really those things in everything. Look at the second season of “Master of None.” There’s a lot of dramatic scenes and Aziz crushes them. He’s also one of the funniest guys out there.