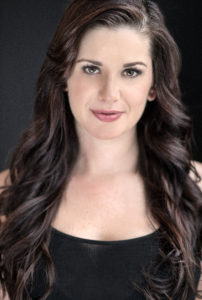 With the film set to hit the festival circuit throughout 2018, we recently sat down with the mastermind (and producer/director) Ovies to discuss how the core concept for “Puppet Killer” first came to her, discovering the right tone, and where Simon is right now.

TrunkSpace: The idea for “Puppet Killer” first struck you after watching a parade with singing puppets. What was it about taking that concept – a kid-friendly character made of felt – and turning him evil that interested you?
Ovies: I was actually producing a really great short called “Bedbugs: A Musical Love Story” at the same time that I was casting a horror film. I remember sitting on the stairs watching a musical number and thinking, “What would I do if I was in charge?” And the answer was, I would kill everyone. I would kill everyone with a puppet. I guess it was the product of living in both worlds at the same time.

TrunkSpace: Independent productions can often take a long time to come into fruition. How long has the “Puppet Killer” journey been from that spark of an idea to where you are today with the finished film?
Ovies: I think about three years? The film itself isn’t actually quite finished. We are happily chugging through post production with an amazing team.

TrunkSpace: Horror/comedy hybrids can sometimes be a challenge for filmmakers in terms of finding the right balance between the two genres. How much energy went into establishing the tone of the film, and when you started out, were there any projects that came before “Puppet Killer” that you wanted to emulate tone-wise?
Ovies: Yes, it is a really fine line to skate between a genuine comedic slasher, and a parody. We worked really hard to play the drama throughout and it was the actors’ fantastic ability to accept the circumstances and to play opposite Simon in a very truthful and honest manner. That was pretty much my biggest focus throughout and I am very grateful the actors trusted me in it. When we talked about it leading up to filming, I would reference “Evil Dead 2,” “Shaun of the Dead” and “Dead Alive.” I think we did a great job finding that energy in the film.

TrunkSpace: In watching the trailer, the film has the feeling of a classic 80s slasher flick – “Friday the 13th” meets super trippy “Pinwheel.” Did that decade of slasher greatness inspire any aspects of “Puppet Killer” or you personally as a filmmaker? 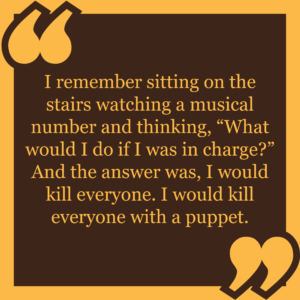 Ovies: A huge yes to both. I love 80s slasher horror films and it is very evident in “Puppet Killer.” It pays homage to all the greats, from “Nightmare on Elm Street,” “Halloween,” and “Friday the 13th.” The main character is raised by a mother (played by myself) who is obsessed with 80s horror and as a result, Aleks Paunovic’s character and Simon are as well.

TrunkSpace: You pulled together a great cast and crew to bring “Puppet Killer” to life. Many of those working on the film have been involved with projects that have amassed huge fanboy/fangirl followings, including “Supernatural,” “The 100,” and “Van Helsing.” From a business perspective, is that the audience that you’re targeting with your film, the Comic Con crowd, because this seems like something they could get behind?
Ovies: I think they are a part of our audience for sure and I know they will love seeing their favorite actors in such a different light, but we definitely made this film as an homage to 80s horror. As a result, die hard horror fans are going to love uncovering the Easter eggs and subtext within the film.

TrunkSpace: You wore many hats throughout the “Puppet Killer” development and production process. Do you enjoy taking on many different roles, or in a best-case-scenario world would you have preferred focusing on the directing alone?
Ovies: I love being creative and I love producing but at the end of the day, I think I will always be my best self when I am able to focus on one job. The next two features I am slated to direct I am only wearing the one hat and I am really excited. However, I always cameo in anything I direct so I expect you will see me pop up in them as well.

TrunkSpace: When it comes to filmmaking in general, do you see yourself as someone with a creative focus on genre projects or do you have an interest in throwing your director’s hat into the every-genre ring?
Ovies: I would love to challenge myself in different genres for sure. I really want to do a big budget action movie like “X-Men” or “Star Wars,” but at the end of the day practical effects and horror will always have my heart. 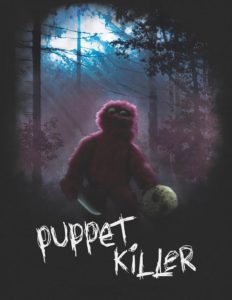 TrunkSpace: What has been the most difficult aspect of bringing your “Puppet Killer” vision into reality? What kept you up at night?
Ovies: Sadly the answer is just money. We want to keep this film ours and not lose creative control by bringing in other money, so the self-funding has been a tad stressful. We have an amazing group of executive producers that have supported us and we are truly grateful. We are trying to keep the quality really high while keeping the costs low. Our problems are certainly not unique in the independent world of film.

TrunkSpace: Was putting the final stamp on your vision a difficult thing to do? When you’re invested so much in a project, is it stressful to officially call it “done” and send it out into the world?
Ovies: I have made several films before “Puppet Killer” and that is a great question. Part of you feels relieved and so excited to share it with the world but then there is another side that will never be 100 percent done. You can always make it better or make different choices, so at one point, you need to trust yourself and your team and call it done. “Puppet Killer” is close to that stage but still has some pieces that we need to have fall in line before we get to call it done.

TrunkSpace: You’re taking “Puppet Killer” to festivals throughout 2018. Is it nerve-racking for you to sit in on a screening of a project that you had such a big hand in both creatively and on the production side of things? Do you look forward to seeing the instant reaction of audiences?
Ovies: I always worry about audience reaction but I LOVE sitting through the emotional journey with them. The first screening is the hardest… there are moments that you hold your breath and hope they get the joke, or that the jump scare will work – the gore will affect them. It is a crazy experience and every audience is different.

TrunkSpace: Finally, where is Simon right now?
Ovies: Well, as I type this, I am on a plane to LA so he is not with me. He is at home with my partner and puppies. He has lived with me since we wrapped and I love it.