For Leslie DiNicola, music is a deeply personal journey, but it’s one that the singer/songwriter doesn’t shy away from sharing with people, particularly in a live atmosphere where she feeds off of the atmospheric ebb and flow of the crowd. Although she is still hitting the clubs in support of her 2016 EP “Love + Destruction,” the NYC-based songstress teases that a full-length album is on the horizon, a creative sunrise that we are eagerly awaiting the chance to bask in.

We recently sat down with DiNicola to discuss hometown shows, artistic growth, and finding hope within the sorrow of life.

TrunkSpace: You’re kicking off March in style with a couple of big shows in your base of operations, NYC, one of which is tonight at The Iridium. Is there something extra special about hometown shows and knowing that the crowd is going to be filled with familiar faces?
DiNicola: Hometown shows are so much fun! Especially when they fall at the end of a tour (like these do) when I’ve been out on the road missing NYC. It always feels like a bit of a homecoming.

TrunkSpace: How would you compare the thrill you get from performing live to that of getting in the studio and seeing new songs get brought to life? Are they two completely different pieces of the puzzle or are both part of the overall picture that the puzzle becomes?
DiNicola: For me, performing live and recording in the studio are two very different experiences that both bring me equal amounts of joy. In the studio I get to dig deeply into the art and lose myself completely in the journey of discovering what music wants to come out of me and what it wants to become. On stage, I get to celebrate that journey and share the emotional experience it was with a live audience. I love feeling the energy of an audience changing all throughout a performance and how completely different each audience is.

TrunkSpace: Your latest EP, “Love + Destruction,” was released in December of 2016. Where are you at now creatively and are you approaching writing from a different artistic POV than you were during the time that those particular songs were written?
DiNicola: Every time I record an EP I change and grow, not just as an artist, but also as a person. Each one of my EPs is very precious to me because they are like photographs of the person I was in a particular moment. So, I would have to say that the work I am creating now is definitely coming from a new POV. But, it’s a POV that wouldn’t be possible without the POVs of each of my previous releases. 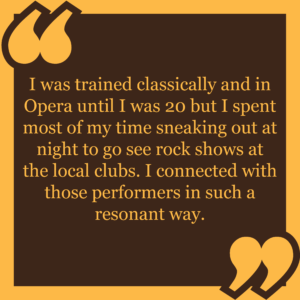 TrunkSpace: Where did your musical journey begin? What was the catalyst for not only loving the art form but wanting to be a part of it in a creation sense?
DiNicola: Technically, it started in the backseat of my neighbor’s car singing along with Van Morrison on the way home from elementary school. But, after that, I was enrolled in very competitive choir programs all over the country. I was trained classically and in Opera until I was 20 but I spent most of my time sneaking out at night to go see rock shows at the local clubs. I connected with those performers in such a resonant way. I knew immediately THAT was what I wanted to do with my life.

TrunkSpace: Are you comfortable in your own songwriting skin? If so, can you pinpoint the moment you found your voice?
DiNicola: I think as a writer and a performer I am always growing and finding new, sometimes surprising, levels of my abilities. To say someone is ever comfortable in their craft I’m afraid implies that they no longer feel the need to learn. And when you stop learning the art ends. I hope to always be learning and discovering.

TrunkSpace: What does your writing process look like? How does a song go from inception to completion?
DiNicola: It almost identically resembles the look of a room shortly after the Tasmanian Devil has blown through. When I am writing, I am at the complete mercy of the songs. They come to me any time they want to: in the middle of the night, on the subway, in the grocery store when my hands are full and I can’t write anything down… I truly feel that I am just a channel for music to move through and that my job is to sit back, listen, and give the songs the space they need to tell ME what they want to become.

TrunkSpace: Creative people are infamous for being extremely hard on themselves in the creative process. Does that apply to you, and if so, where are you hardest on yourself?
DiNicola: I am always critical of the work I do and I think people in general, artist or not, are always hardest on themselves because we have a decent sense of our potential and we know when we are not meeting it. I will always be able to listen back to a recording or a live video and tell if I was 100 percent on my game or not. Even though other people might swear they can’t hear or see a difference I will know it’s there. But, at the same time, I think it’s extremely important to achieve a balance by making sure you acknowledge to yourself when you have done something that you couldn’t have done better. 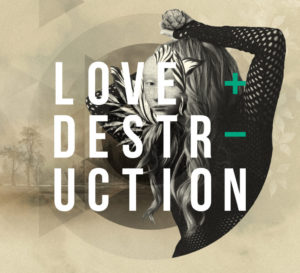 TrunkSpace: What do you want people to take from your music? What messages do you hope they uncover and decipher in a way that they can apply to their own lives?
DiNicola: While every song I write has its own story and it’s own message, I think the common thread that connects all of my work is an inherent sense of hope against life sorrow.

TrunkSpace: We’re big baseball nuts here and we know that you’ve performed the National Anthem for a number of teams. Is getting to do really fun, interesting things like that a rewarding perk of the job? Also, that’s a tough song to sing! Do you get nervous or are you always, baseball pun intended, ready to knock it out of the park?
DiNicola: I’ve sung the Anthem for the Atlanta Braves on three separate occasions as well as the New York Mets, the New York Rangers, the New York Red Bulls, and the Dallas Stars. It is definitely an awesome perk of the job! I grew up in a family that loves sports, so to be able to be a part of them in this unique way and bring my talent to an arena that is so different from the typical music scene is so much fun. You are correct, it’s not the easiest song ever written, but that’s what makes it so rewarding when you hear yourself belting it out in front of all those people in that enormous space. Like Tom Hanks says in “A League Of Their Own”…

“Of course it’s hard, it’s supposed to be hard… it’s the hard that makes it great.”