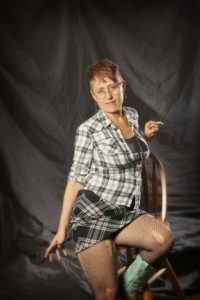 TrunkSpace: Was comedy always in the cards? Were you a “funny” kid, even at an early age?
Barton: Yes. But I drank a lot as a child.

TrunkSpace: When did you decide to pursue stand-up comedy as a career and did you make a plan for how you would attack things?
Barton: Comedy will do with me what it sees fit. My only plan was to not sleep with any comics after I started doing it.

TrunkSpace: How long did it take for you to discover your voice as a comic?
Barton: I wish that wasn’t such a difficult question. My voice? I don’t have one – or one that I maybe feel is as fulfilling to me personally as I would like. I keep my creative voice open to change. Right now I’m combining painting and comedy and LSD.

TrunkSpace: How much work goes into a joke before it’s ready to be tested out in front of a live audience?
Barton: I think one has to be pliable when creating. Be ready with your equipment, ie: pen, paper, phone. Maybe you’re thinking immediate thoughts with a general write up, or you save your one sentence for an open mic and see what you get with that. Or you start a writing group 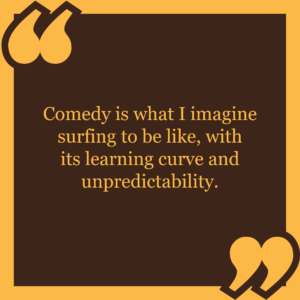 by gathering three to five comics that only hate each other a little and that you think are funny.

TrunkSpace: If a joke doesn’t seem to be working, how many chances do you give it in a live setting before you decide to rework it or move on from it altogether?
Barton: I try and figure out why I like it so much and go from there. Some jokes just fall out of pop culture, too.

TrunkSpace: Does a receptive and willing audience fuel your fire of funny and help to put you on your game for the rest of your set?
Barton: A hot crowd is the best crowd, and I hate wasting it, but I still do, if I’m being honest. It’s also on the comic to raise the bar and try and read the audience and consider which jokes might work best.

TrunkSpace: What is your most memorable performance experience (good or bad!) that will stick with you for the rest of your career and why?
Barton: Too many to count: performing a set with the Altercation Festival people at the now defunct Fire House booked by Matt Micheletti. Fucking hardly anyone was there, but I had a great set and it was such a good show.

It’s hard to say what drives me. Comedy is what I imagine surfing to be like, with its learning curve and unpredictability.

TrunkSpace: How do you handle hecklers? What approach do you take?
Barton: I kind of started talking over them early on and still kind of do that, unless they give me a great idea for a comeback. They are unruly children.

TrunkSpace: What are your thoughts on the stand-up landscape in 2018? Are you optimistic for the future of live comedy?
Barton: Who knows what people find funny, now or in the future. But as soon as everyone starts outlawing comedy, only outlaws will do comedy. Besides, I’m as optimistic as any white, middle-aged woman with no children, that owns a house. I can always live in my attic and die there. That’ll be funny to me.

TrunkSpace: Finally, who do YOU find funny?
Barton: People that are trying to do something beyond what I see on a daily basis. Broken people trying to act fixed. And old scary movies. And bad dreams and irony. Plus old British comedies. Mel Brooks. Richard Pryor. My mom was pretty funny. My dad. Erma Bombeck. Marquis de Sade. Bill Hicks. Jessica Kirson. These are a few of my favorite things.