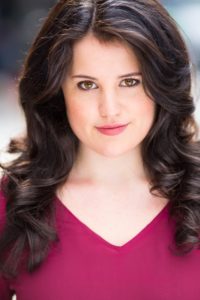 TrunkSpace: When did you know that you wanted to act for a living?
Leigh: My earliest experiences with acting involved my three siblings and one of those giant VHS camcorders that you had to balance on your shoulder. We made lots of silly movies, like spoofs of “Star Wars” and James Bond. I started performing in musicals in middle school and by the 8th grade had decided that I wanted a career in theater. I went on to become very involved in musical and dramatic productions in our public high school’s theater program, at Westford Academy in Westford, MA. This program was (and is) top notch and it gave me a solid foundation. My decision to study acting was solidified my junior year of high school when I played Maureen in “RENT.”

TrunkSpace: Was there a particular performance or actor/actress from your childhood that you remember being drawn to and inspired by?
Leigh: As a young kid I looked up to Jim Carrey and Mike Meyers. I remember dreaming about being a female Jim Carrey. When I grew into my teens and young adulthood, I began looking up to strong women actors like Mindy Kaling, Tina Fey, Amy Poehler, and Viola Davis.

TrunkSpace: How did you decide to approach your career as an actor? Did you formulate a plan of how you wanted to attack what is known for being a hard industry to crack?
Leigh: I was accepted into NYU’s Tisch School of the Performing Arts and spent the first half of my time there studying Musical Theater at their New Studio on Broadway. But I knew that I wanted to do all types of acting. I wanted to make sure that I received training in TV, film, and commercial acting, as well as voiceover. So halfway through my time in college I made the move to a Tisch partner program, Stonestreet Studios. I stayed in NYC for a couple of years after graduation and then decided to move to LA. Before I moved to LA I came up with a game plan of certain steps I needed to take and certain tasks I needed to accomplish before I arrived and for when I arrived in LA. There are so many different ways to get a foot in the door, you just have to be prepared for when that opportunity comes, and also put yourself out there and be open. And I never want to stop learning! I am currently enrolled in an animation voiceover class and I’m loving every minute of it. 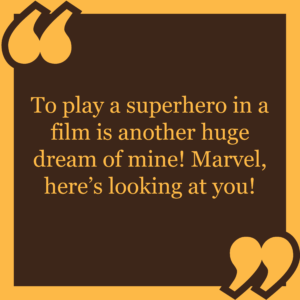 Leigh: I moved away to Muhlenberg College when I was 18, and it was six hours away from my home, which was far for me. I then transferred to NYU the following year. I lived in NYC after graduation for a couple of years, auditioning, doing regional theater, student films, an independent TV pilot and voiceover work. Then I decided to move to LA in September 2016 to focus more on TV/Film/VO.

TrunkSpace: Was that move an easy transition for you initially? How long did it take you to feel at home and find a good support group of friends and peers?
Leigh: Moving from a rural area of Massachusetts where I grew up to NYC was a drastic transition. But it was exciting and I was soon too busy with college classes and rehearsals to focus on adjusting. You just do what you have to do to get things done! I miss NYC sometimes. LA is a whole other beast, because it is a completely different environment. I don’t have school or a set schedule. I have to make sure that I set aside time to focus on my career. I get support from my older brother, who is also an actor in LA and from the great friends I’ve made, many of whom are co-workers at the restaurant I work at. It took about three months to feel comfortable and at home, and it’s still a work in progress, but that is to be expected… it still hasn’t been a year!

TrunkSpace: What has been your biggest break in terms of a particular role or project thus far?
Leigh: I’m still waiting for that big break! I guess I would say my big break was being involved in a short film soon after arriving in LA that made me SAG-Eligible. Since I’ve been in LA I’ve done several short films and a pilot for a web series that they want to pitch to networks. Right now I am focusing on obtaining representation and getting into the voice acting world out here.

TrunkSpace: Is there a specific type of role you’d like to take on or a specific genre that you feel more at home in?
Leigh: I would love to land a super heroine role, something involving action and combat. I have some experience with shooting (rifle, shotgun, and pistol), as well as bow and arrow. I have also done some boxing and kickboxing. I hope to take a stage combat course. I also love indie, fantasy, sci-fi. 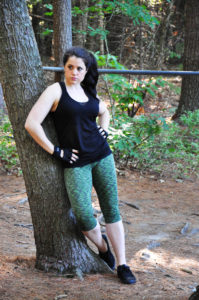 TrunkSpace: What would you say is the greatest strength an actor/actress can have outside of acting ability itself?
Leigh: Experiencing life to the fullest and allowing yourself to experience all of the emotions that come with that. And, of course, taking those you care about with you on that ride. Exposure and connections with people and situations have helped me become a better actor with regards to emotional empathy. You have a better understanding of characters when you experience all that life has to offer. As an actor, you need to draw from experiences and emotions.

TrunkSpace: What is your ultimate dream when it comes to your acting career? Where would you like your path to lead?
Leigh: I would love to be on a long-running sitcom, because I love comedy and being around energy and fun. Also, you’d get to develop relationships with the cast and crew and really develop your character over many seasons. Comedy is my favorite. However, to play a superhero in a film is another huge dream of mine! Marvel, here’s looking at you!

TrunkSpace: What advice would you give another young aspiring actor/actress who is considering moving away from home to pursue their dream?
Leigh: Do it. Take the plunge. You’ll gain self-confidence, learn so much about yourself and other people, see places you wouldn’t have otherwise, and you’ll be going outside your comfort zone, which is most important. Do what’s best for you and the dreams you want to pursue. Take the risk, but be smart about it. Before you make the move, do your research, reach out to people and make contacts. Make sure that you have some money saved up. I moved back home for three months before my move to LA, in order to work full-time and save every dime. You don’t want to worry about where your next meal is coming from while you are trying to focus on establishing your acting career. In the end, you will find good people to surround yourself with and opportunity wherever you go, as long as you remain open to exploring and working hard to achieve your goals.