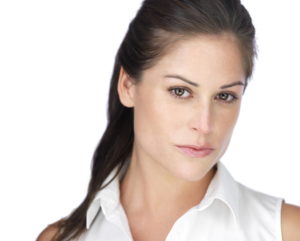 For many of us who consume pop culture, the actors who appear in commercials are as recognizable as those who star in our favorite big budget popcorn pictures. Unlike the A-list celebrities, however, we rarely get to hear from those performers who woo us in 30 seconds or less. TrunkSpace is looking to change that with Trunk ADventures, our regular feature spotlighting the recognizable faces and voices of the commercials that infiltrate our lives.

This time out we’re shining a spotlight on Adrienne LaValley, an actress who has appeared in spots for Pizza Hut, Ferguson, and Kit Kat, to name a few, but it’s her ongoing run in ads for National Floors Direct that has made her a part of the family in many homes, particularly throughout the New England area.

TrunkSpace: Talk to us a little bit about how you came to be one of the most recognizable faces and voices in commercials, especially in New England where the National Floors Direct spots have more of a regional reach?
LaValley: Totally. It runs more in the New England area. There have been some sightings in the tri-state area. (Laughter) But yeah, although it’s called National Floors Direct, it primarily serves people in the New England area. That was one of my first jobs, several years ago when I first got into acting. I just sort of continued with them. When I joined the union and they were interested in using me again, I said sure but that they’d have to make it a SAG project, and that can be quite the undertaking, but they were like, “No, no no… we really want to use you again,” so they went ahead and did it. It’s a good gig. We shoot several commercials at once so they can use it for a few years, so it’s always funny when they’re still commercials that are being aired three years later because we shot them three years ago.

TrunkSpace: It does seem like the shelf life of those commercials greatly outperform those of most national spots.
LaValley: It’s true. It’s totally true.

TrunkSpace: When did you do your first shoot with National Floors Direct?
LaValley: Originally, oh my goodness, I want to say seven years ago. Maybe eight years ago. But we just reshot again just a couple of months ago. So, I had shot with them eight years ago several times, over a two to three years period, and then I joined the union and it kind of had to be put on hold for awhile. And then they came back just a few months ago and said that they wanted to do more.

TrunkSpace: But even during that period where you weren’t shooting new spots, those original spots were still running.
LaValley: Yeah. They can hold them for up to like three years and then they have to stop running them until they get permission to use them again. So, there was a lapse in coverage, which is why they wanted to reshoot instead of just running the commercials again because obviously they have all new deals and it’s very specific to whatever time of year they’re running these campaigns.

TrunkSpace: Have the new spots started running yet?
LaValley: They have started running. I will be in your living room. If not yet, very shortly. (Laughter) I have a lot of family who live in the New England area and they love it because they’re like, “It’s like you’re having coffee with us every morning.” (Laughter)

TrunkSpace: Well, it’s probably true for strangers as well. If someone is sitting down every day and watching the news, and every day your spot runs during that time, then you’re pretty much a part of their daily routine.
LaValley: Right. I used to get these messages… and you never know what to do, because I get a lot of private messages… people find me on Facebook. I made a professional page where I try to direct people to if they want to be Facebook friends because, me personally, I feel like Facebook is for your friends and your family and people who are close to you and know you because I have pictures of my wedding on there. And not to be rude or anything, but that’s not public. It’s not something that I want spread across the internet.

TrunkSpace: Unfortunately there isn’t always an understanding of that private life when it comes to social media.
LaValley: Exactly. And, like, I get marriage proposals and weird things like that. And you don’t want to be rude because it’s very sweet and you’re very grateful for people that are watching your career and want good things for you.

TrunkSpace: But at the same time, marriage proposals are USUALLY reserved for people you know.
LaValley: Correct. Especially this day and age. (Laughter) But, I did have this one woman who was so sweet. She had sent this picture of her two-year-old son kissing the television because every morning he would see my commercial and he would waddle up to the TV and kiss the TV. And that was so unbelievably sweet. But, I have to direct you to my professional page. (Laughter)

TrunkSpace: It does point out how inclusive commercials are though. Person A may watch one show and Person B may watch a different show, and neither may know the actors in both shows, but they know the actors in the commercials that run during them.
LaValley: Exactly. And it was really eye opening once I started doing a lot of commercials… when you’re first getting into acting, your brain is sort of trained to say yes to everything just because you’re trying to make your way. You have to sort of be careful about the companies you represent because your face is representing them, and so as many lovely emails as I would get, I would also get really horrible, horrible, horrible emails. Which is shocking to me… the amount of time people have to make fun of you online and just rip you apart. And a lot of them were coming from disgruntled customers, which unless the company is like this horrific, awful company and it’s public knowledge that it’s terrible, there’s always going to be both sides to it. Some people are going to love the service that they get and some people are not.

TrunkSpace: I’m sure a lot of people just assume you work FOR the companies you’re starring in the commercials of. 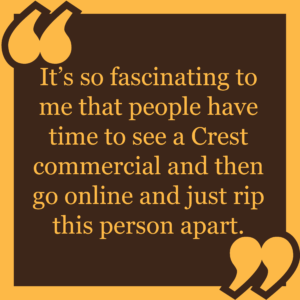 LaValley: Right. I worked for this car company… it was for a whole slew of dealerships in the New England area, and they would call the dealership and say, “I want the woman in the commercial… I want her to sell me a car.” And they’re like, “Well, technically she can’t.” (Laughter)

TrunkSpace: When it comes to commercials, even more so than scripted TV, people probably view those portrayals as a real person reciting lines, not an actor reciting lines, so it makes you more approachable in their eyes. Not everyone connects the dots that it’s still acting.
LaValley: Exactly! And it’s this weird disconnect that people can have, especially in the… and I hope this isn’t taking a turn for the negative, but I think it’s important… especially in the realm of internet bullying. I have whole blogs written about me… just people making fun of my face. Just like ripping me apart. As many people saying really lovely things about me, there are equal amounts of people saying… I mean… the things that you can think about to make fun of somebody is awful.

TrunkSpace: The internet has certainly become the Wild West of bullying. And while that’s nothing new, it does seem like it’s more prevalent these days.
LaValley: It’s so fascinating to me that people have time to see a Crest commercial and then go online and just rip this person apart. It’s crazy to me. There are so many better things to be doing with your time. And I know one of the arguments is, “Well, you opened yourself up for that by getting into this business,” but they’re not taking into account that those are kids. Those are THEIR kids who had dreams of being an actor, and in order to get there, you’re going to do commercials. And I’m super grateful to do that. It’s just part of the process. So, they’re ripping people apart that are really good people.

TrunkSpace: What about in real life? Do you get stopped on the streets or in the gym by people who recognize you?
LaValley: Yeah. I got stopped in New York midway when those commercials were airing for the first time. This woman had come from the New England area and she knew me immediately. She was like, “I’ve only been here for the afternoon, I just came from Boston, and I saw a celebrity!” I remember thinking to myself, “Would we consider me a celebrity?” (Laughter) Of course I was very grateful and I signed her piece of paper and it was very lovely. (Laughter) I have another series of commercials that were running in the New England area at the same time, so I knew I was all over these people’s TVs morning, noon, and night. (Laughter) I would go to a bar and I could tell people were very, very awkward. A whole row of people would be staring at me from across the bar. And there’s nothing that will ever make you comfortable with that. (Laughter) Because you don’t know if you should just stand up and address it and be like, “Let’s just get the giant pink elephant out of the room. Yes, those are the commercials.” Or, if you just sound like a big, huge jerk. (Laughter)

TrunkSpace: You also recently starred in a film called “Hell’s Heart,” which was recently released on Amazon. Can you tell us a little bit about it?
LaValley: That is a fantastic film. The trailer sort of makes it feel that it’s a horror film, and it definitely has elements of scariness, but really it’s kind of a thriller based around a family drama. It’s a love story. I play this mother named Lisa who was murdered 20 years prior and the film starts with her murder and then flashes forward 20 years. The boy that witnessed her murder has sort of been, not obsessed, but really couldn’t detach himself from her family. When he saw her murdered, he was living across the hall from her family and she had three very young children, and so he has become involved and is marrying one of the daughters… the eldest daughter. But, there are some twists to that as well. And I end up coming back, not haunting this family, but inhabiting this guy’s body essentially and everybody gets very confused as to where he ends and where I begin. The family obviously doesn’t believe him for awhile and then they do. It’s the most romantic exorcism film you’ll ever see. (Laughter)