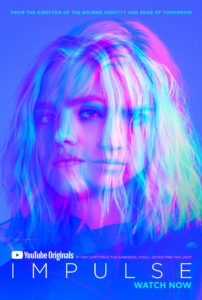 This time out we’re chatting with Lauren LeFranc, showrunner of the science fiction series “Impulse,” about job descriptions, creating television in a short attention span society, and finding inspiration in “Buffy the Vampire Slayer.”

TrunkSpace: Formal definitions aside, what does the job of a showrunner entail for those who are not familiar with the term?
LeFranc: Well, I guess, you’re first a writer and then second to that, you’re the CEO of your television show, essentially. You’re in charge of running the writers’ room. You are technically in charge of everything to do with set and production and post production. You touch everything. There are certain department heads who are specialized in those particulars, but you have your hands in everything.

TrunkSpace: And does that change series to series or platform to platform?
LeFranc: No, it’s pretty much that. That’s the general job description. Everybody does it a little differently, but that’s the job.

TrunkSpace: Would 12-year-old Lauren be surprised that she would one day be serving in that role?
LeFranc: I think she’d be pretty stoked. I grew up on TV. I was, really, partially raised by books and movies. And so 12-year-old me would probably freak out a little bit if she knew that she could go to set and write stories – like a heightened level of playing make believe. And honestly, part of why I write and what I think about a lot is my younger self and just trying to think about what impact TV had on me and really wanting to put that forward for other people.

TrunkSpace: You grew up on television, but “Impulse” is on YouTube Premium, so you’re paying it forward, but in an entirely new way, which is pretty wild.
LeFranc: Yeah. I mean, my God, TV has changed so much. Our industry has changed within the last couple of years – even the last couple of months – so dramatically. I never would have anticipated watching the Internet or walking around with an iPad and watching all these different streaming platforms. And that’s how people often view content now. So, yeah, it’s really crazy.

TrunkSpace: So as a showrunner, do you think about that – the way people are watching – and does it ever impact the creative?
LeFranc: Our goal is always to visually make it look as beautiful and amazing as possible, assuming and hoping that people are 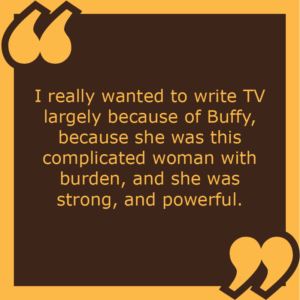 watching it on a bigger screen, truthfully. Because, I think, we try to be a very cinematic show. That doesn’t mean that I’m not aware that some people are going to watch it on their iPads or their phones, but the goal is not to cater to that particularly, but to maybe inspire people to want to see it on a bigger screen and to try to get more out of it. Especially, because we have a lot of visual effects, and our directors are so excellent. You really want to offer that on a bigger screen if you can. I’m aware of the different options people have – the lack of attention span sometimes people have. I don’t creatively think on that level in terms of how we break story and the stories that we come up with, but I’m very aware of it.

TrunkSpace: That lack of attention span that you speak of can also be seen as a blessing for your series because, if people are watching and are invested in this day and age, you know you’re doing something right.
LeFranc: Absolutely. Everyone has a lot of options. I think the thing that I really love about being on YouTube Premium is that we can be any length. So, we don’t have to hit a certain length for every episode. I try to keep it in a certain window that I think is reasonable, perhaps because of the lack of attention span that I personally have. So, if it’s something 60 minutes, to me, it better be really fantastic and worth those 60 minutes. It’s a matter of minutes and it matters a lot, but we also can create whatever kind of content we want. We don’t have similar restrictions to broadcast networks or even some pay cable. So in that regard, it’s really freeing creatively.

TrunkSpace: With that said, could “Impulse” exist on another network in its current form or is it unique to YouTube Premium?
LeFranc: No, I definitely think it could. Because streaming platforms… if they’re willing to take risks and play in different genres, absolutely. The comparable networks to YouTube, I think, like Netflix and Amazon quickly come to mind. YouTube has given us such creative freedom. That’s been really a lovely experience, but that doesn’t mean that it couldn’t play elsewhere. I mean, we do curse a lot. (Laughter) We probably would need to censor ourselves a little bit.

I think a lot of TV and streaming cable services right now want to offer creativity to showrunners and to writers. And that’s really amazing to be a part of right now.

TrunkSpace: On the opposite side of that coin, is there a feeling inside the TV community that it won’t always be this good and that perhaps this level of content creation won’t be able to sustain itself?
LeFranc: Yeah. I mean, I don’t know if people could have predicted where we’d be exactly right now. And again, it’s ever-changing. I think there’s a huge potential that this is a bubble that’s going to burst at some point, but from my perspective, it’s like, let’s play in that bubble for as long as they let us. Because I think the thing that I love about it is that now, you can tell unique stories. We’re dealing with trauma, but there’s genre elements. We’re focusing on a complicated young woman and we’re not trying to cater to a particular broad audience in such a way to make that character super likable instead of just about making her more real and honest. And I don’t know if I could have told a story like this even five years ago, honestly. And that’s just a product of having so many different opportunities.

TrunkSpace: Five years ago, “Impulse” would have been a story about teleportation first, and the character stuff would have all played in the background.
LeFranc: Exactly. And that has been the greatest gift is that I get to tell a story that is not leading with some sort of snazzy element like teleportation. It’s leading with character and it’s leading with trying to create a grounded character drama and focus on a young woman, but focus on the people around her and equally focused on the people in this town who are struggling financially. No one is super pretty. No one is glamorized. No one is overly sexualized. That has been YA badly up until this point for whatever reason in TV, I think, with a couple exceptions. But really, it’s been, for me as a young woman growing up, a little disheartening and confusing because I’m like, “I’ve never experienced high school like this.” “My So Called Life” I think was a show for a time that really revolutionized how you think about young people. And that’s something that I hold onto a lot. And I was a big fan of “Buffy the Vampire Slayer.” I really wanted to write TV largely because of Buffy, because she was this complicated woman with burden, and she was strong, and powerful. And I hadn’t really seen a lot of those depictions before. So, I’m trying to lead in my generation with “Impulse” in that regard.

Season 2 of “Impulse” is available today on YouTube Premium.