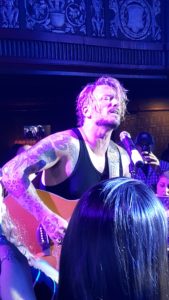 The Reason We Went: A phoenix within the music industry, Walker has risen from the ashes numerous times, allowing the machine to chew him up but never spit him out. He has reinvented himself and his sound over the course of his career while never losing the connection to his fans or what has made him such a compelling songwriter and producer.

What We Thought: An early show due to the venue transforming into a dance club at 10:00 PM, the headliner took the stage while many in the city were still sitting down for dinner. The Georgia native poked fun at the ungodly anti-rock hour, routinely making tongue-in-cheek suggestions that midnight was soon upon us and that we should buckle in for a long set because he and his band were playing until they kicked us all out.

Walker delivered on his promise, churning out and energetic set that was breakneck at times, visiting the charismatic singer’s back catalog that included songs from his most recent album “Stay Gold,” as well as fan favorite past recordings like “The Spade” and “Sycamore Meadows.”

Show Highlight: With the clock ticking down and the dancers banging on the doors, Walker surprised the crowd with his second encore by appearing in the audience with his acoustic guitar in hand. He climbed onto a table in the sea of people and began an intimate set that included personal stories, which culminated in a singalong that the entire venue contributed to.

Closing With The Opening: Holden’s voice, which could carry across the city even without the microphone supporting it, captivated the crowd, especially when he gave a stripped down and memorable performance of his song “Boys In The Streets.”