There was a time in the not-too-distant past when if you wanted to get your superhero fix, you had to pick up a physical comic book or settle for midday reruns of a green Lou Ferrigno with gamma-radiated eyebrows. Now, on any given night, you can scroll through the hundreds of channels at your disposal and watch extraordinary people doing extraordinary things.

Many have long predicted that hero fatigue would cut down on the audiences who turn out to watch those in capes and cowls take on imaginative villains, but that has yet to manifest itself. In fact, as we venture deeper into the character catalogs of comic book publishers, something really exciting is happening… we’re seeing the genre become more diverse.

Case in point: “Black Lightning,” the latest offering of the DC Universe’s small screen expansion premiering tonight on The CW, focuses on an African American superhero who comes out of retirement to fight the good fight once again.

We recently sat down with series star Kyanna Simone Simpson to discuss her thoughts on getting to play in a metahuman world, the reason she feels the series will be a success, and why she didn’t know Matthew McConaughey was standing right in front of her.

TrunkSpace: Superhero-based projects continue to wow audiences and don’t seem to be losing steam anytime soon. When you landed your reoccurring role in “Black Lightning,” what was going through your head at the time?
Simpson: Oh my gosh, I literally went crazy because when I started reading up on “Black Lightning,” I found out that this was the very first African American superhero family on network television and I get to be a part of this story, so it was such a blessing. Now I get to be on a cool show with people who have superpowers. That’s just so amazing to me.

TrunkSpace: Between “Black Lightning” and projects like “Black Panther” and “Luke Cage,” it seems like we’re venturing into this really great period of diversity in the genre.
Simpson: Exactly. It’s as though we’re finally being able to show we’re super as well. We can come out here and show you that we can have great shows that push the limits too. I think that’s something that’s very cool about “Black Lightning.”

TrunkSpace: And for a network like The CW that is so good at blending fantastical elements with reality, “Black Lightning” looks to be continuing that formula… balancing the genre storytelling with the “real life” stuff that becomes so relatable to audiences.
Simpson: Yes. “Black Lightning” has a very good story – a very deep story about family and life and culture and neighborhood going on behind the scenes, as there’s obviously superheros in this show, Black Lightning, but it tells a very detailed story as well. I think that’s what the viewers are going to like a lot about this show. 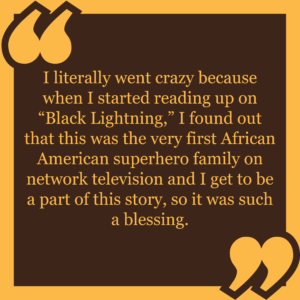 TrunkSpace: We get the vibe that this is the kind of show that would appeal to longtime comic book fans, as well as those people who have never even picked up a comic book before.
Simpson: Yes. I thought the same thing when I first started reading up on it. I went to go grab all of the comics and I was like, “Wow, we’re really hitting the ball on both DC and dramatic television.”

TrunkSpace: Most people haven’t seen the series yet because it actually premieres tonight. What can you tell us about your character without giving too much away?
Simpson: My character’s name is Kiesha. She’s best friends with Jennifer Pierce, who is the youngest daughter of Black Lightning, Jefferson Pierce. I’m her partner in crime. I try to encourage her to push the limits sometimes because she’s the daughter of the principal of Garfield High and I just want her to get out there and have fun. That’s really where Kiesha comes in.

TrunkSpace: And it’s probably safe to assume that you two will find yourselves in some trouble as well, right?
Simpson: (Laughter) You’ll see the kinds of things we get into.

TrunkSpace: So from a character standpoint, was there anything about Kiesha that you were excited to bring to the screen, perhaps a part of her personality that you have yet to tackle with a character in your career?
Simpson: Kiesha is very close to my heart because she’s such a free spirit and she doesn’t allow other people to dictate how she thinks or how she’s going to go about her day. That’s what I like so much about her, her confidence. It’s one of the very first roles that I was able to play where I’m able to kind of peek into the life of a teenager, having fun and everything, wanting to party all the time, because a lot of jobs that I’ve done, they have been period pieces and this is a different look at everything. I enjoy it so much. It’s so much fun.

TrunkSpace: And just to be clear, she’s just a regular teenage girl, right? No superpowers of her own?
Simpson: (Laughter) She’s a regular girl and she loves it.

TrunkSpace: You also have a film due out later this year called “White Boy Rick,” which has a stacked cast including Matthew McConaughey and Jennifer Jason Leigh. What was the experience of shooting that film like for you?
Simpson: When I found out about “White Boy Rick,” I almost peed my pants. It was so amazing. Matthew McConaughey is definitely an actor who a lot of new actors would dream to work with, and that was my case, so when I got the opportunity to play Brenda in “White Boy Rick,” I jumped at it. I’m so excited for this film to premiere in the summer. I can’t wait to see how the audiences react, which I believe is going to be really positive and great.

TrunkSpace: Matthew’s career has taken such an interesting turn within this last decade or so. The roles he tackles now, he physically goes through the changes to become whoever that person is, and in doing so, really has become a chameleon onscreen.
Simpson: Yes. The very first day that I met Matthew actually, it was my first scene and I was nervous because my first scene of the film when I began filming was with Matthew. That’s a lot of pressure, but when I walked on set I’m looking around and I had no clue that that was Matthew McConaughey right in front of me. I had to look at him twice and I’m like, “Oh, whoa!” He’s such a cool guy. I was able to have a few conversations with him and he really made me feel a lot more comfortable and a lot less nervous on the job.

TrunkSpace: The film’s release is still months away, but can you tell us anything about Brenda and where she falls into the story?
Simpson: Brenda is a classmate of White Boy Rick, Ricky, and she’s along his path in life. She kind of makes him grow up a little bit more. When you see the film you’ll understand what I’m saying, but she has a very reasoned mind and she also has to grow up pretty quick in life as well. 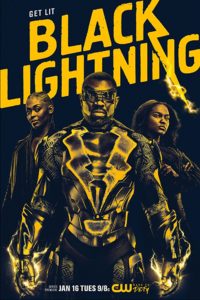 TrunkSpace: It terms of tone, it’s a pretty heavy story.
Simpson: It is, and when I started doing my research and homework on the story, I was like, “Wow, this is such a great story that needs to be put on film.” Everyone needs to know about this because when you see it you’ll understand what I’m saying, but it’s definitely something that can happen to a lot of youth.

TrunkSpace: One of the things we noticed in looking over your body of work is just how diverse it is. You’re not doing the same types of projects over and over again, but instead, mixing it up to include a little bit of everything. Is that something you set out to do, to bring as much genre diversity to your work as possible?
Simpson: I definitely want that to be how my career continues. It just so happens that the roles that I have landed have been so diverse and I’m thankful for that because that’s how I want to be. I want to be able to immerse myself in the types of characters that…

I don’t want to be just an every day girl. I want to be able to understand all types of different lives. When I played young Deborah Lacks in “The Immortal Life of Henrietta Lacks,” I learned so much. All of my jobs seem to teach me and I seem to learn something brand new with each and every job. That’s what I plan to do for the rest of my career.

TrunkSpace: You mentioned “The Immortal Life of Henrietta Lacks.” Getting to play the younger version of a character who was being portrayed by Oprah Winfrey… and now there’s rumors that she might run for president… that has to be pretty cool.
Simpson: Ms. Winfrey is literally the best. I am so blessed to have been able to work with her. She’s a good mentor of mine now and I’m almost speechless every time I think about it or talk about working on “The Immortal Life of Henrietta Lacks” because that was my biggest dream come true.

TrunkSpace: In a previous interview when asked about what your future goals were, you said that you want to have a degree on your mantle and more quality roles under your belt. Does that mean you have goals beyond acting and the entertainment industry?
Simpson: Well, I’m actually in school for Entertainment and Media Studies, so my goal is to 1.), win an Oscar, and 2.), I want to be able to produce, direct and write as well as act in films. I’m just so intrigued by the entire film industry and entertainment world. I don’t want to stop at acting. I want to continue to grow and spread out in the entire industry.

TrunkSpace: So far so good because not many college students can say that they’re staring down superheroes when they’re not studying.
Simpson: (Laughter) I know. It’s definitely hard. I’ll never say it’s easy, but it’s what I have to do and it’s what I desire to do.