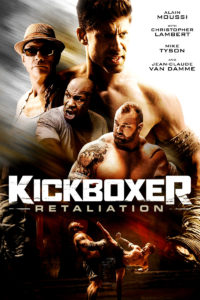 Reason We’re Watching It: “Kickboxer: Retaliation” is even more hard hitting than the original relaunch of the franchise, “Kickboxer: Vengeance.” The fight sequences are great and packed with stunning choreography. You get to see Mike Tyson throwing punches, Jean-Claude’s signature kicks, Alain’s great stunt work and Lambert’s iconic voice and screen presence. Oh, and the cinematography is gorgeous in between the kicks to the head.

What It’s About: Kurt Sloan (Moussi) is preparing for a big MMA title shot, but he is abruptly abducted and transported to Thailand, where he is forced to fight a genetic freak that dwarfs any foe you’ve seen Sloan face before. He doesn’t go it alone, though. He receives training from Master Durand (Van Damme) and Briggs (Tyson).

Whoah! Rewind that!: It’s tough to pick a single moment that you’re going to want to watch over and over again, because the jaw-dropping fight scenes are all worth viewing a few times. We loved the comedic elements sprinkled in throughout the punches as well.

Watercooler-Worthy Tidbit: Van Damme was originally supposed to star as Johnny Cage in the “Mortal Kombat” movie alongside Lambert, but the Muscles from Brussels had a scheduling conflict – he was busy playing Guile in the “Street Fighter” flick. “Kickboxer: Retaliation” finally unites Van Damme and Lambert… let Mortal Kickboxing Begin!