It was recently announced that, in the near future, the world will be getting more “Future Man.” With a second season of the whacky time traveling series now on the horizon, we decided to revisit the Hulu comedy, and in doing so, make the show’s card carrying bro our very own wingman.

Kevin Caliber, a United States Marine Corps veteran who is also a fitness model and stuntman, stars in the series as Blaze, the 80s BFF of Derek Wilson’s Wolf. (Check out our interview with Wilson here.)

We recently sat down with Caliber to discuss his unexpected journey with the character, menacing neon outfits, and why fans would be lining up for an 80s style Wolf and Blaze sitcom.

TrunkSpace: “Future Man” is an extremely unique show that strikes a unique tone. Was it also unique for you in terms of the experience?
Caliber: Yeah. It’s one of those projects that as you read the script, you had no idea where it was going. Not to say that with every show you could tell that, but a lot of the times, whenever you read scripts, you kind of have an idea of where it’s going. You have an idea of the character developments. “Future Man” was one of those that, as you read it and as it goes along, they take it to places that you didn’t expect because they’re going to the far reaches of their imagination to get there.

TrunkSpace: And comedy must be so hard to read on the page, too, because unless you’re in the room with the creative team, it’s difficult to fully absorb tone, right?
Caliber: Absolutely. It was not until the first day on set because for me, I did episode 9 without doing a table read. They brought me right onto the set and I had no idea exactly what they were going for. In the script it says something like, “Oh, a couple of menacing guys come up,” and then we see the outfits that we’re wearing. It’s hard to be intimidating wearing shorty short hot pink shorts. (Laughter) 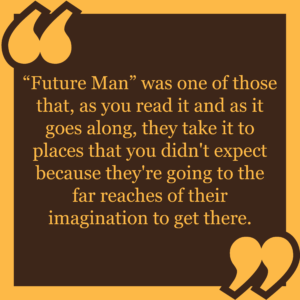 Whenever I came back for the next episode, I went in for the table read, and that was the first time that we really get the chemistry of everybody saying it aloud, and you get the tone of the story as a whole, and now you’re kind of seeing where it’s going. So you see where the comedy is, and then even between the table read and whenever it does come to shooting it a couple weeks later, the script has changed because, obviously, they make changes all the way up until being on set. And they were such a funny comedy team to work with, that they would come to me between takes and give me different things to say. You would hear a laugh come from off-camera and I’d go, “Okay, I guess that was a good one.”

You’re always curious to see what they’re going to use because I’ve improvised before on sets, but that one, it wasn’t so much me improv’ing but them kind of improv’ing what I was doing and then making it up on the spot. I’ve never had a chance to work with a group like that.

TrunkSpace: In comedy, sometimes working on the fly is where the best material comes from because it’s a springboard for instantaneous laughter, which signals if something is working or not.
Caliber: Absolutely, and as long as you don’t fall victim to strictly trying to make the people in the room laugh… that’s when you kind of can get meta, and now you’re just trying to make each other laugh as opposed to what will translate.

I hear about some of these methods of the editing process that they go through with these tests (screenings) and then they show you the same movie or the same scene eight different ways because they filmed it every which way, just to see how crowds react to it. Well, what’s making the people in LA laugh doesn’t necessarily make…

I’m from Missouri so I go back to Missouri and I’m cracking jokes and people have no idea what I’m talking about because I’m speaking in LA language.

TrunkSpace: You have to go back to Missouri in your menacing “Future Man” outfit. (Laughter)
Caliber: (Laughter) Yeah, that will really throw everybody off.

I was an athlete and a little bit of tough guy growing up – just a good ol’ boy from Missouri, and then I joined the Marine Corps. I was just a down and dirty type of guy. Now some of the stuff that people see me in, and how I end up getting dressed, they’re like, “Whoa, when did you become such a little pretty boy?” And I’m like, “No, I’m still the same guy!” (Laughter)

TrunkSpace: So when Blaze first came into your life, did you know he would be a recurring character or did that sort of grow as the episodes went on?
Caliber: I did not know. Originally I thought it was a standalone from just that one episode. Even going into the audition, it was strictly as a day player, and then getting on set and working and then getting to know the writers… Kyle (Hunter) and Ariel (Shaffir) were there every day… I got the call again and then again. They were like, “I want to add you to this, can you do that?” I was on set, sitting behind the producers’ row, and one of the producers turns around and gives me a look. He says, “Hey, you got one more episode?” I was like, “Of course! I’m here for you! Add me to every one. I love this!”

It was just taking it to the next level, and that’s what made me laugh so much. Whenever I told anybody about it I was like, “It’s the 80s and we end up becoming coke heads because that’s what the 80s were,” and people would be like, “Aw, man, so they must have made you up to really look bad and really strung out?” And I’m like, “Oh no, they made me look gorgeous!” (Laughter) I’m like this prostitute druggie, but I’m still rocking supermodel status.

TrunkSpace: You kept it together. That’s what they did in the 80s!
Caliber: (Laughter) Yeah, exactly. I was Wall Street!

TrunkSpace: The 1980s was the era of the sitcom, and after watching Blaze and Wolf together, all we could think of was that a spinoff sitcom needs to happen!
Caliber: Oh my God! I can’t help but go down that rabbit hole every now and again. Whenever I get tagged in something on social media, on Reddit, on Twitter and Instagram, anytime that something is posted, that seems to be a recurring thing that sticks out to me. Every time I get the, “We need more of this! You glazed over it too quick! What happened in those years?”

I love all of the characters. Josh (Hutcherson) did an amazing job carrying the show. He was so fun and he was one of those guys that just laughed about everything along the way. He still couldn’t believe what they were having him do, and he was one of the producers on it, but you can tell he was all-in. And then of course, with Tiger and Wolf just killing it. But the consensus seems to be that everybody really loves Wolf, and I’m so happy for Derek. He was such a good sport. Such a cool guy. He brought it. He really brought that character to life in a way that was so unique and fun while still being… his innocence. He played it so well. I’m really happy that Wolf was the one that really kind of stood out to so many people.

TrunkSpace: Well, and Wolf couldn’t be Wolf without having a bro in his life like Blaze. Safe to say that everybody needs a bro like Blaze in their lives?
Caliber: Oh, absolutely!

Catch up on season 1 of “Future Man” on Hulu and look for season 2 later this year.