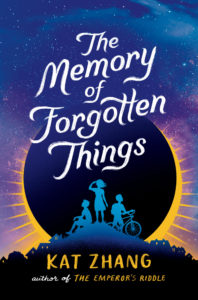 This time out we’re chatting with author Kat Zhang about her new novel “The Memory of Forgotten Things,” crafting a character that seemed to be waiting to be discovered, and typecasting stuffed animals.

TrunkSpace: As you gear up for the release of “The Memory of Forgotten Things,” what emotions are you juggling with? Is it difficult putting so much of yourself into something and then releasing it into the world?
Zhang: There are always a lot of emotions swirling around release day! While writing a book, you get so caught up in it, lost in it, and while your agent and editor and a few critique partners might read it, it’s still nerve-wracking to wonder what the wider world will think. “The Memory of Forgotten Things” is my fifth book, but that worry and excitement hasn’t faded at all. I’ve been dreaming about publishing books since I was 11 or 12 years old, though, so there’s a lot of joy, as well. I feel incredibly lucky to be writing books!

TrunkSpace: There is some heavy subject matter in the book, particularly pertaining to loss. How did you approach the character’s dealing with it in a way that was honest, but at the same time, unique to her perspective? Was it something that you have had to deal with personally that then manifested itself (either consciously or subconsciously) into the character?
Zhang: Sometimes characters start out sort of muddy, and clarify over time and drafts. Sometimes they arrive nearly fully formed on the page, like they’ve been waiting to be discovered. Sophia was the latter kind of character. The loss of her mother and the effect it had on her life unfolded really naturally. I haven’t lost a parent, but I have lost other people in my life, and I did pull on that when writing about her grief and her longing for a world in which the loss had never occurred.

TrunkSpace: As heavy as the subject matter is, was it also important that you approached it in a way that reflected on the readership as well, because as a YA book, those identifying with Sophia may not be emotionally mature enough yet to even understand that level of loss. Was that a juggling act tonally to find a balance between being honest with the reader but also speaking to their maturity level?
Zhang: “The Memory of Forgotten Things” is my second Middle Grade book, and I do think that writing for ages 8-12 is different 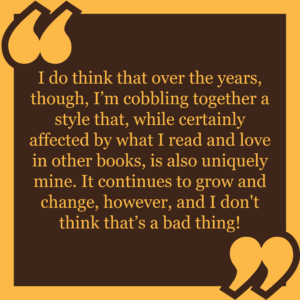 from writing for the Young Adult crowd, which tends to be 12+. On the whole, though, because the book is told from her point of view, and is so closely tied to her feelings and thoughts, I never felt like I needed to change anything to make it more “kid-friendly.” Sophia is 12, nearly 13, and as long as I stuck with thoughts, feelings, and actions that rang true for a girl her age, the rest fell into place. In any case, I think kids are often much more mature and aware than adults give them credit for, so I didn’t feel like I had to hold much back.

TrunkSpace: As you look back at the work, what are you most proud of when it comes to “The Memory of Forgotten Things?”
Zhang: I have always loved both science fiction and magical realism, and how books in those genres use the “oddity” of their worlds to illuminate something about humanity. “The Memory of Forgotten Things” is not quite science fiction, not quite magical realism, but I wanted to use Sophia’s strange memories as a way to explore her grief, and I’m quite proud of the way it all tied together.

TrunkSpace: We read that you used to write plays with your stuffed animals, which is something that we can TOTALLY relate to. (We actually used to have a whole wardrobe department for them!) So tell us, who were the main stars of your productions? What stuffed animals got the leading roles?
Zhang: Oh man! That’s really cool – I would have loved to have a wardrobe department. I used to make dresses out of old socks for my Barbies, if that’s at all similar! I had a stuffed Dalmatian puppy that was my favorite as a kid, so she often got the spotlight. There was also a stuffed wolf that I was a little scared of, so he usually played the villain. I guess he got typecast early on. (Laughter)

TrunkSpace: You started writing your first novel at age 12. Looking back, what did you learn in that process as a preteen author that you still apply to your work to this day?
Zhang: Write what you love. Write what excites you. Back then, I’d fill notebooks with just scenes from books that stood alone, without beginnings or endings – just the most dramatic or exciting scenes that my imagination could come up with. I think a book can be built on scenes like that. As people say: if it’s boring to write, it’s probably boring to read!

TrunkSpace: How long did it take for you to discover your voice as a writer?
Zhang: I’m still trying to discover it! I often read books by other authors and fall in love with their voice and wish mine were more similar. When I go back and read my first book, I can still see the influences of the books and authors I loved at the time, and I’m sure that in the future I’ll look back on my current novels and see similar footprints of the writing styles I admire most right now. I do think that over the years, though, I’m cobbling together a style that, while certainly affected by what I read and love in other books, is also uniquely mine. It continues to grow and change, however, and I don’t think that’s a bad thing! 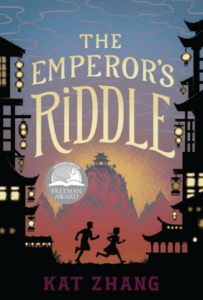 TrunkSpace: Regarding the process, is writing a labor of love for you or does it feel more like labor? Do you enjoy the process?
Zhang: It’s definitely a labor of love. Some days are harder than others, and I enjoy some parts of the writing process more than others, but writing is never something that I don’t love deeply. I don’t think this business of being a writer is very survivable if you don’t!

TrunkSpace: And what does that process look like? What are the ideal conditions for putting in a good day of writing?
Zhang: I write best when I have a large chunk of time (a few hours, maybe even a full morning) to really sit down and sink into things. I’m a morning person, so I love diving into writing as soon as I get up. Unfortunately, work and school make it so that this doesn’t usually happen for me, but it’s something I shoot for when I can. I find it really inspirational to be reading a good book at the same time, too, so I try to have one on hand.

TrunkSpace: Do you self-edit as you write?
Zhang: I try to keep away from it, but it inevitably happens. Not so much on the sentence level, unless I’m specifically preparing a partial for submission, but I’m always discovering new aspects of my stories as I draft them, which means going back and correcting scenes that came out “wrong” the first time.

TrunkSpace: Where are you the hardest on yourself as a writer?
Zhang: It depends on the book, and on my mood! Currently, I’m trying to focus on crafting really interesting, realistic characters, as well as thematically tight stories. There’s so much I can improve on though, and every new book brings its own challenges.

TrunkSpace: What are you working on now and what will people be able to read next?
Zhang: “The Memory of Forgotten Things” releases May 15, and I have a picture book releasing Fall 2019 with Charlene Chua illustrating. It’s called “Amy Wu & the Amazing Bao,” and I’m really excited for it. As for what I’m working on at the moment, I have a young adult novel in the works. It’ll be my first return to YA since my first trilogy. I’m having a lot of fun with it!

“The Memory of Forgotten Things” is available May 15 from Simon & Schuster.