It is no easy feat to to be a standout in a cast that includes Matt Damon and Julianne Moore, but Karimah Westbrook does just that in “Suburbicon,” the latest film to be directed by George Clooney. In the small town thriller based on a true story, the Chicago native plays Daisy Myers, who along with her husband William (Leith M. Burke), discover that the idyllic American Dream of settling into a peaceful suburban existence is not all that it is cracked up to me.

We recently sat down with Westbrook to discuss the secrets of the suburbs, why the film’s message is so timely, and how Daisy Myers never let hatred harden her heart.

TrunkSpace: The cast is amazing. The creative team is the best in the business. The story is compelling and timely. With so many great factors involved in your new film “Suburbicon,” what do you think the biggest draw is?
Westbrook: I think the biggest draw for the film “Suburbicon” is that it’s an interesting play in regards to what the suburbs is supposed to be, in the sense that, everyone thinks that the suburbs is the safest place to live, right? This movie turns that on its head in the sense that you find that there is murder, deceit, betrayal, and racism all happening in this one town. It’s just the unique play on the world, the suburbs, and how people look at the suburbs and what actually happens there.

TrunkSpace: So, how people present themselves face to face and how they respond in a completely different way behind closed doors?
Westbrook: Absolutely. It’s what happens behind closed doors, and in this case, some things people aren’t trying to hide exactly – how they feel. In particular, with the Myers family, they were the first black family to move to this all white suburb, which is based off of a true story of what happened with Daisy and William Myers in 1957 in Levittown.

TrunkSpace: The film is set in the 1950s. For a lot of younger people, visually it looks like an alien world, and yet the subject of race relations and the conversations we’re having now are not 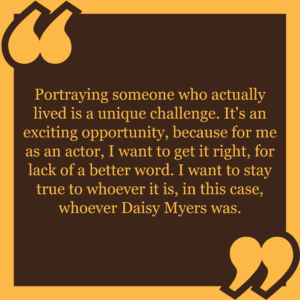 dissimilar to what they were having back in that time period.
Westbrook: Absolutely. I think that racism has always existed, but I think now with technology, we have the ability to really shine a light on it. We’re able to capture a lot of moments, as before a lot of things went hidden because we didn’t have the technology that we have today. I think it will be good for the youth to see exactly where we were during that time, and look at where we’re at now, and to really see how much has not changed. Hopefully they’ll be able to make decisions of wanting to do something completely different moving forward.

TrunkSpace: Now it seems it’s not about how people behave behind closed doors, but how they behave behind avatars and their digital devices.
Westbrook: It’s so much easier for people to hide behind avatars online and spew all types of hate and malice. We’re living in some really, really interesting times. The internet definitely makes it easier for people to be more vocal about how they actually feel, but at the same time, hide their identities.

TrunkSpace: Do you feel like a film like this, releasing at this particular time, is more important than ever?
Westbrook: I think so. I think this film will garner a lot of social commentary, especially in the sense of, like I said, seeing where we were, and seeing where we’re at right now, and really seeing how much things have not changed. A lot of times seeing it on film, in this movie and the full story, you really get a chance to see just how ridiculous it was and how unwarranted these behaviors were during those times. It’s the same exact thing right now. But, I think that this film offers you a full story in the sense of, you could really see how it was unwarranted and unnecessary.

TrunkSpace: It seems like a lot of people who are disconnected from the subject of race just sort of thought race relations was something that resolved years ago, but as recent events have shown, that is not even remotely the case. A film like this, it becomes a matter of art imitating life, and helps to present a different point of view.
Westbrook: Absolutely. That’s the power of media, film and television. You get to tell stories, and a lot of them change the world, or could change the world and change people’s thought process about things, and definitely shed light on what things were and how they are now. That’s why I really love filmmaking and creating movies, because art imitates life on a lot of levels a lot of times.

TrunkSpace: The Coen brothers wrote the film. They’re known for having a very brand-specific artistic point of view, often times handling serious or dark subject matter in a humorous way. Is that creative fingerprint on the film as well?
Westbrook: Yes, I do feel that you will see the Coen brothers in the film – their writing and their style. George definitely has his own style as well, so it’s a little bit of a combination of the two. I think hardcore Coen brothers fans will be able to see the difference, and also see the similarities for sure.

TrunkSpace: As you mentioned, you’re playing a woman who actually existed and walked this earth. Does that put added pressure on you from a performance standpoint?
Westbrook: Yes, absolutely. Portraying someone who actually lived is a unique challenge. It’s an exciting opportunity, because for me as an actor, I want to get it right, for lack of a better word. I want to stay true to whoever it is, in this case, whoever Daisy Myers was. I did a lot of research. It was important for me to give an accurate depiction of who she really was and how she really lived through those times. It was exiting, rewarding, and definitely a bit of a challenge because you want to be as close to the truth as you possibly can to who they really were.

TrunkSpace: Does it make you second guess choices you may make? Do you stop and say to yourself, “Would Daisy react this way?”
Westbrook: She had written a book too, which was very helpful. “Sticks’N Stones: The Myers Family in Levittown.” That gave me a wealth of insight as far as how she felt and how they approached things. That gave me enough to really feel like I had a good understanding of where she was and where her heart was. I felt pretty confident on living her, as far as understanding who she was. I felt like I had a pretty good grasp on who she was as a person, so I didn’t have any hesitance.

TrunkSpace: What a gift for you as a performer to have a book, written in her own words. That must have been a great tool for you?
Westbrook: I was shocked because after reading the book, you see how they didn’t let that experience harden their hearts. They actually went through a lot. It was very eye-opening in the sense of, just the level of love that they had regardless of what was being done to them. It was very insightful.