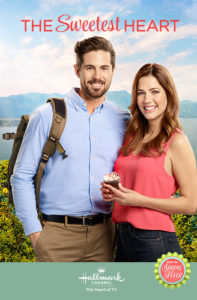 We recently sat down with Gonzalo to discuss seasonal displacement, what she found refreshing about the storytelling in “The Sweetest Heart,” and why having an endless supply of cupcakes on set isn’t necessarily a good thing.

TrunkSpace: “The Sweetest Heart” is kicking off Hallmark Channel’s Spring Fever programming event. That has to be a cool feeling when your movie is basically serving as the springboard for a big event like that.
Gonzalo: Yeah, it makes me feel so great. I tend to do a Hallmark movie yearly, ‘cause they’re so much fun to work with, you meet such great people and it’s so quick. These projects are always just so happy and fulfilling that you’re like, “Why wouldn’t I want to be laughing all day?” The last one I did, it opened the fall, so it’s kind of awesome that I did one last fall, opened the fall premiere, and then it’s the spring premiere. I’m all, “That’s pretty cool!” I kind of like that.

TrunkSpace: Is it fun getting to play in those seasonal sandboxes, especially when you’re shooting them out of season?
Gonzalo: Yes and no. Last summer I did a film that was the fall, but we were shooting in the summer, so we were literally dying of heat. “Okay, now comes the sweater and the jackets.” (Laughter) So you’re literally shooting a film in pretty hot weather and yet you’re still wearing all these different layers because it’s the fall. And the same thing happened in this one. It’s kind of like, now it’s springtime, but it was freezing. (Laughter) And for me, having grown up in Miami, the cold weather is nice to see from a window while you’re sitting next to a fireplace. (Laughter) But it was interesting to hear, “Okay, now you gotta take this coat off…” and I was like, “No, I don’t want to!” And also, I didn’t realize how much it rained in Vancouver. At first, I’m like, “This is beautiful. We don’t get rain in LA all the time, it’s pretty great.” And then by like day 10, they’re like, “Do you still like it?” And I’m like, “I’m over it. I can’t. I’m just over everything right now.” (Laughter) Once we wrapped, I started seeing sunshine. I’m like, “Great, now you’re coming!”

TrunkSpace: You mentioned your past experience with Hallmark Channel. How did your experience on “The Sweetest Heart” differ from the other movies you worked on?
Gonzalo: The director, I had worked with before – we had done a film before – so I already kind of got excited to work with Steven (Monroe), because I really love how he works. We really work well together. He knows his stuff, he knows what he wants, and I’m such a perfectionist when it comes to my work that I don’t ever… like, I have nightmares about showing up to work not prepared, and I literally panic and I wake up. So I knew how it was going to go, because of my relationship with him. 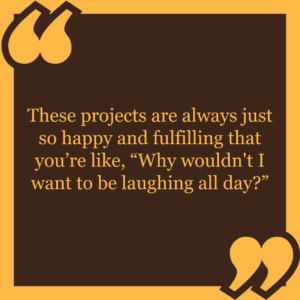 I’ve only done two other Hallmark films before, but they’re such the love story, and the romance, and you know, obviously the empowerment of a woman, which I love playing. I love that Hallmark does that. I love that Hallmark has women protagonists. They’re following her. You’re really caring for this woman, and that to me is so empowering, especially in these times, right? And what I really liked was the fact that there are three different love stories in this film. You had the main love story, which is my character and Chris McNally’s character. Then you have the Clayton (Chitty) and Tammy (Gillis) love story, and then you have the Andrea (Brooks) and Jordan (Burtchett) love story. So, it was really nice and I like how they all kind of intertwined with each other. I found that to be very refreshingly new.

TrunkSpace: A lot of Hallmark Channel movies focus on would-be couples who are just meeting for the first time and discovering each other, but in this one, your character Nate and Julie’s character Maddie had a past. Did that lend for a different layer of backstory to what you two did from a performance standpoint?
Gonzalo: Yeah. There was a lot of pain there that came from them not being able to work it out when they were 18 and 19. And then in a way it’s like, when you’re 18 and 19, what do you know? It was really nice to have that backstory, but it also made it a little hard because you don’t really have a lot of time to spend with your co-star to kind of create that chemistry, and create that history. But I was very lucky with Chris, ’cause we met before we started shooting and we kind of talked about things, and it’s mostly just getting to know each other, because it’s like testing the reality of it all. How do you convince people that these two characters have known each other and have loved each other for so long? It was very easy with him. He’s such a wonderful human being that it was very comfortable to get to that place, sooner rather than later in a sense. It’s always such a weird thing that that’s what you do for work. “I have to go fall in love with you, cool? I have to find chemistry with a really good looking guy. Oh good.” (Sarcastically) “Work sucks.” (Laughter)

TrunkSpace: Did having an existing relationship with the director enable you to arrive on set and just hit the ground running, because from what we understand, these shoots move very quickly?
Gonzalo: Yes, cause we literally shot in 14 days. You’re shooting essentially a feature film. 110 to 120 pages in 14 days is pretty ambitious and we were shooting six day weeks, so we only had one day off, so I already knew coming in that I was like, “Oh man, I’m gonna be so tired.” But, knowing how Steven operates and knowing how he knows his stuff, and knowing that he prepares himself so well the day before… you’re not overly creating things, you already know what you want, you already know how you’re going to edit it… and that’s always the key to me, cause there’s no reason to waste time. Everybody is here for a job, let’s get it done.

TrunkSpace: By the time that you arrive on set, is your dialogue pretty much locked in or is that still getting massaged on the fly as well?
Gonzalo: Oh God, I wish! (Laughter) No, it’s always like you’re a work in progress in a sense. If you’re lucky, you have a week to prepare. Some of these films come on so quickly, so it’s very much, “Just hang on!” You’re going for ride in a sense.

I don’t ever want to lock myself into dialogue because when you get to set, you play. I don’t know what the other actor is going to do. I don’t know what the room is going to look like. I don’t know what the energy in the environment is going to be like. So I prepare my stuff – I prepare my character, my dialogue, or my intentions rather, of what the scene entails, and then show up to work and just kind of be in the moment and be organic. Everybody has their own process, but to me, it’s like I know what my character wants, where she’s starting, where she’s going, what the intentions are, and then just show up and play. When you show up you just kind of want to keep loose. You want to keep fresh. I feel like sometimes when I lock myself into a way of doing, or saying, or preparing, then I get myself in trouble.

TrunkSpace: That makes complete sense. Just like in life, when you put expectations on things, it’s easy to get let down.
Gonzalo: Oh yeah. Expectations are the worst thing that ever happened to us. I mean, I’m sure there’s worse things, but it’s true – you’re right. When you expect something, it never turns out that way, ever, so you’re literally just setting yourself up for disappointment each time.

TrunkSpace: We talked about how quickly a shoot like this can happen, and how much work you do within that time frame, so is it a bit of a culture shock when you call wrap and suddenly it’s all gone?
Gonzalo: Oh yeah, big time. I’ve had this conversation with so many actors before, where you’re like, you fall into this weird depression thing. I shouldn’t use that word loosely because it’s a very serious thing, but you kind of have that feeling of like, “Wait, what happened to my life?” You kind of just turn the world off. Your world, your friends, your family – you’re kind of like, “Okay, I’ll come back in two or three weeks,” cause you submerge yourself into that world and that’s who you are. Your crew members become your family, your co-stars become your best friends and your director becomes your leader. Once you kind of get out of that head space, you’re kind of like, “Wait, who was I? What was I doing? What was I doing in life before this?” But that’s the thrill of it, I think. I love doing that. I love packing my bags and being like, “Where are we going and what are we doing and who am I meeting?” And I’ll talk to anyone who wants to talk to me. I just enjoy meeting people and knowing their stories and kind of learning, “What brought you here? How did we get to meet?” I take everything in and I make the most of every day.

TrunkSpace: One of the things that must also be interesting is that not only are you inhabiting this person, but you’re also inhabiting their career. In this case, Maddie is a cupcake maker. As an actress, you’re sort of taking in these other vocations, too.
Gonzalo: Yeah, totally. You definitely realize, “How do I know this? Oh, cause I learned it at work.” Granted, I never really learned how to make cupcakes this time around, but you kind of just… you do in a way, like the concept of it. We pick things up through the process.

TrunkSpace: Hopefully you picked up a few cupcakes because there must have been plenty around the set.
Gonzalo: (Laughter) At first I was like, “Oh my God, this is going to be amazing! I’m going to eat all of them!” And then you’re like, “Wait, this doesn’t fit. Shit. Nope, no more. No more sugar.” And then you do, and then you have that sugar rush, and you’re like, “Okay, now I’m just annoying myself.” (Laughter)