After reading the script, Josh Cruddas fought hard to be a part of “Polar” – the new Netflix film based on the graphic novel by Victor Santos –  so hard in fact that he worried that he may have come on too strong when he first met with director Jonas Åkerlund and producer Jeremy Bolt. Calling the screenplay the most “exciting, badass, funny and promising” he had ever read, the Nova Scotia native’s tenacity paid off and he was cast as the assassin Alexei, proving that talent, when mixed with passion, is a powerful combination.

We recently sat down with Cruddas to discuss the universe he’d sell his car to be a part of, the terror of being trained in terrifying weaponry, and the unexpected benefits of his career as an actor.

TrunkSpace: “Polar” is based on the web-comic/graphic novel of the same name. Comics continue to be a well that Hollywood taps, both for film and television adaptation. As an actor, what is it like having that source material (and existing audience!) available to you, but at the same time, not having the pressure of stepping into a brand that the masses have been exposed to yet, like a Spider-Man or Batman?
Cruddas: To me, it’s incredibly exciting. New, quality IP in film is hard to find these days, with the traditional studio model less likely to take big-budget risks on content without a big built-in fanbase. I think Jeremy (Bolt), Keith (Goldberg) and the other brilliant minds at Dark Horse and Netflix have really stumbled upon a gold mine in Victor Santos’ graphic novels; here’s a fantastic comic world begging for a film adaptation, compete with some die-hard fans, but underground enough that the rest of us can still be surprised by everything when we see the movie version. And for me, as the actor, I can rest a little easier knowing that nobody’s comparing my version of the character to, let’s say, Daniel Day-Lewis’ 1994 Oscar-winning version, you know? That all being said, I’d sell my car for a chance to be in a Marvel movie.

TrunkSpace: The original comic was very stylized, and what’s great about the film adaptation is that a lot of that is carried over in terms of how it’s shot and the use of color. Visually, what makes the work you did on this project unique in comparison to previous roles?
Cruddas: I got VERY lucky in this film to work with Jonas (Åkerlund), who’s a visual maestro, as well has his team of Pär Ekberg, Susie Coulthard, Lea Carlson and Emma Fairley. These people have created this brilliantly vibrant world that myself and the other actors get to live in. I think it’s a welcome rebuke of a lot of the grey, so-dark-and-shaky-you-can’t-even-see-the-fight-scenes cinematography style we see in certain big action movies and TV these days. The TV show I’m shooting right now is also very colorful too, but I’ve never done anything as stylized and sleek as “Polar” before. Usually the most colorful thing onscreen with me is the four strands of ginger hair I have left on my head!

TrunkSpace: The trailer definitely has that bad-ass, pump-you-up feel to it. Upon first glance, it’s sort of “Taken” meets “A History of Violence.” When you first read for the project, what excited you most about it and did it meet those first impression expectations when you called wrap?
Cruddas: I thought I had made a mistake, reading the screenplay before meeting Jonas and Jeremy last winter – it was one of the most 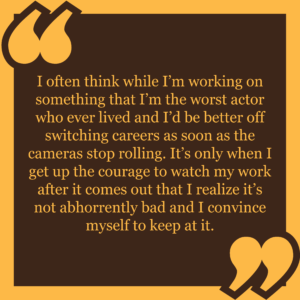 exciting, badass, funny and promising scripts I’d ever read. So when I went to meet with them, I loved the role so much and was so desperate for the part that I thought I went completely over the top in my excitement for the job. Thankfully they gave it to me anyway, and I think the whole team (including our huge, incredible crew who worked longer hours and longer nights than I ever had to) really captured the magic I found in the script as we shot the film.

TrunkSpace: For the viewer, the most memorable part of a film or television series is the end product, but for those involved in it, we would imagine it’s the experience. For you, what aspects of working on “Polar” will you carry with you through the rest of your career and life?
Cruddas: Good point! There were a lot of memories I’ll take with me from shooting “Polar.” The A-Team (assassin squad) really bonded over the months, so we would go sing karaoke till the wee hours and post the results to our group chat… Johnny Knoxville once sank me in a game of pool by looking me dead in the eyes while he pocketed the 8-ball, and that kind of humiliation is something I’ll never forget. Also, being trained on the weapons was a terrifying and humbling experience – regular people like myself should have no access to those things! But more than anything, it gave me the confidence to play more action-oriented, stunt-heavy roles like this one in the future.

TrunkSpace: The film is a Netflix original. You also worked on “Cardinal” for CTV/Hulu, and will be appearing in “Wayne” for YouTube Premium. With so many platforms producing such incredible, character-driven content these days, how has that landscape opened things up for actors? Are there more opportunities today than there were even a few years ago?
Cruddas: Definitely. I was lucky to pop by on “Wayne” last summer and being in North Bay during the autumn for “Cardinal” was one of the coolest experiences of my career so far. It reunited me with my buddy Billy Campbell who was my first on-screen “dad” in “Copperhead” for Warner Bros back in 2012. So I don’t know if it’s just that I’ve finally figured out how to not be the world’s worst actor, or if there’s just more opportunity with Netflix’s incredible investment in Canadian productions and all these new streaming services (my next show is for another new streaming service) – but I’m just grateful to be working!

TrunkSpace: You’re also an award-winning music composer whose work has appeared in numerous projects. How do you balance your creative interests and do you view them as separate paths or one continuous path with different stops along the way?
Cruddas: I was super lucky that my parents decided to enroll me in piano lessons when I was six. I had an incredible teacher named Diane Krochko who didn’t punish me for not wanting to just play Mozart all the time. She actively encouraged creativity, along with a lot of other mentors in my early life, including my parents who home-educated me and my sisters who appeared in short films myself and my friends used to make. I think all of those experiences and people guided me to where I am hopefully going now, by giving me the chance to play – both musically and onscreen.

TrunkSpace: Creative people are always their own worst critic. Are you harder on yourself as an actor or as a musician?
Cruddas: Probably as an actor. But it’s fairly equal. I often think while I’m working on something that I’m the worst actor who ever lived and I’d be better off switching careers as soon as the cameras stop rolling. It’s only when I get up the courage to watch my work after it comes out that I realize it’s not abhorrently bad and I convince myself to keep at it. Musically, sometimes I’ll spend hours on four bars of a theme because it’s just not feeling right, but then I’ll often get carried away by the emotion when I’m writing – if I can make myself cry with a few notes, then I hope it can do the same for the audience.

TrunkSpace: What has been one of the most unexpected benefits of a career in the arts that you’ve experienced, but could have never anticipated when you first set out to pursue your dreams?
Cruddas: Cool question. Probably passing along the few things I’ve learned along the way. One of the greatest privileges of my life is my role volunteering at SickKids hospital in Toronto, reading stories and singing songs in the library there. I’m also very lucky to teach at a children’s performing arts/triple threat school called Stagecoach in Canada, and I never thought I’d enjoy that job as much as I do. I had turned down numerous teaching gigs in the past because I thought I’d be rubbish at it, but my talented friend Emma Smit convinced me to take over her class one day five years ago, and I’ve never looked back. I’m quite sure teaching acting has made me a better actor, and the kids keep me grounded – anytime I have to cut my already-receding hair for a role, I step into the classroom and get roasted more thoroughly than a Thanksgiving turkey.

TrunkSpace: What has been the highlight of your career thus far?
Cruddas: That’s a difficult one! “Polar,” “Cardinal” and “Copperhead” are up there, as well as a film called “Duet” that I made a couple years ago with my best friend since age six, Andrew Coll. When I heard a violin section play music that originated in my head for the first time on a film called “10000 Miles,” that was insanely special too. And the project I’m shooting right now is extremely close to my heart but I’m not allowed to breathe a word about it or I’ll be dragged through the streets by my hair.

Hmm. I think more than anything, just being able to do what I love for a living is one of the greatest feelings in the world, and it’s not lost on me how lucky I am to be able to do that.

TrunkSpace: Time machine question. If you could jump ahead 10 years and get a glimpse of what your career looks like a decade from now, would you take that journey? If not, why?
Cruddas: Great question. I think I’d want to keep my career a surprise for future Josh (hopefully I still have one), but I would love to see the state of the world in 10 years. We’re in a scary, pivotal spot right now, with social media, fear-mongering and gerrymandering the enemies of truth, democracy and our planet at large. I hope more than anything that in 10 years, we’ve invited empathy and facts back to the table, and we’ve started letting smart and compassionate people make the decisions again.