Amin Joseph is about to have himself one crazy summer. Not only is he hitting the beach to kick some butt in the big screen adaptation of “Baywatch,” but the NYC native is set to star in the gritty FX series “Snowfall,” which premieres in July.

We recently sat down with Joseph to discuss dipping back into the past by way of period pieces, why swimming trunks are not for him, and how “Snowfall” will do for crack cocaine in the same way that “Breaking Bad” did for meth.

TrunkSpace: The “Snowfall” trailer paints the picture of a very intense show.
Joseph: I’m really ecstatic about the trailer that just dropped. Damson, the lead of the show, he showed it to like 20 people all at basically the same time. (Laughter) He’s been going through it because he’s been with this project, probably about three years from when he initially booked it. It was fun to see him get all ecstatic. He was feeling it.

It looks really good. I liked the trailer. And the stuff that we did on the show, it really has some heart. I really like the way that FX put it together. Sometimes you can kind of see the vision from the pilot or whatever, but it was a very compartmentalized shoot and most of the cast… I would only interact with them during the table reads. It was so compartmentalized and it only spans about three weeks in the summer of ‘83 for that entire first season. Everyone is kind of in their own world and we start seeing it intersect towards the end of the season. It was a fun ride.

TrunkSpace: Is “Snowfall” the first period piece you’ve worked on from that particular era?
Joseph: Yeah. This is the first period piece that I’ve done where I remember it. I slightly remember some of the 80s, so it’s kind of cool to actually have lived in a period. I just did another period piece called “LAbrynth” that is in the 90s and I really know the 90s. The 90s is part of my time.

TrunkSpace: And not only that, but that project is based on such a well-known story, so in a lot of ways, you probably absorbed so much of that by way of TV and news during that period.
Joseph: Exactly. And that’s funny because you’re right. A lot times you think, “Oh, I lived that.” And it’s like, “Well, no, you lived through the headlines of that. You didn’t know Biggie and Pac!” (Laughter) But, it felt like you did because the music and everything consumed the entire zeitgeist.

TrunkSpace: And it just must make the work so much more fun because you can step outside of yourself even in a physical sense and just inhabit the character entirely?
Joseph: Yeah. It’s the closest thing to having a theater production… a classical theater production. It’s the second best thing to that. Like you said, it’s not just an emotional trip, but it’s about what you’re wearing and that brings out so much of the behavior. 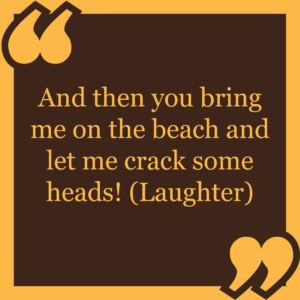 Joseph: I think that it’s just loosely based around the events that happened during that time. I don’t think they got too close with it to tell anyone’s life story, but there’s enough comparisons to be made with figures that we know from that time.

TrunkSpace: And even though it’s a period piece, it still manages to feel timely to what’s going on in our world today.
Joseph: Yeah. It seems like that with any period piece you do, you realize that the more things change the more they stay the same in some sense.

It’s kind of like how AMC did for meth. This is what FX is going to do with crack cocaine. There’s a lot of humanity there. I feel like Dave Andron and Tommy Schlamme and Jon Singleton… they wanted to make sure that there were multi-layered characters and it’s not what you think on the surface with most of the cast. It goes a little deeper than just, “Okay, he’s a tough guy drug dealer.”

TrunkSpace: People go down paths for certain reasons. That person is more than just a tough guy drug dealer and it’s his path that brought him to that spot and made him who he is. There is a human being there.
Joseph: And it’s so many greys. A lot of times these hoodlums or mobsters or drug dealers, they’re also giving out all of the turkeys during Thanksgiving. Or they’re making sure that single mothers don’t get evicted or that the man of the house can continue being the man of the house because they’re giving them a job. So there are so many greys and it’s good to be in a world where you see some of that and you also tell a good story that people may know, but don’t know everything about. I’m really looking forward to seeing how the audience responds.

TrunkSpace: On the opposite end of the spectrum, your new film “Baywatch” is set to premiere this Friday, which seems as far removed from “Snowfall” as you can get.
Joseph: (Laughter) Big time. It’s a totally different mood. It’s a different type of fun.

TrunkSpace: Where does your character Frankie fall into things?
Joseph: Well, “Baywatch” has a woman villain. Priyanka Chopra is THE villain of the film and I’m basically a henchman, but because it’s an action/comedy, you have some really big gags and then you also have some kick butt action going on. I tussle with some of the main guys and I don’t want to give too much away, but we definitely bring the bad to the beach.

You’re not supposed to bring the sand to the beach, but you’ve got to put the disclaimer in there that you don’t bring bad guys to the beach either. (Laughter)

TrunkSpace: You don’t bring sand to the beach, but when you’re shooting at one, you probably bring sand home with you.
Joseph: (Laughter) Exactly.

We should just give the bad guys swimming trunks and perhaps they’d become good guys.

TrunkSpace: (Laughter) It’s tough to look badass in swimming trunks.
Joseph: (Laughter) You’re right. If they would have JUST given them some trunks… a little red bathing suit… then how bad could they be?

TrunkSpace: Shorts are kind of a young man’s game.
Joseph: (Laughter) Yeah. Especially trunks. Anything that has cheekage… anything with cheeks… doesn’t really work for me.

TrunkSpace: (Laughter) It’s got to be pretty cool going into a project like “Baywatch” because with the people involved, there’s a good chance it’s going to have a nice opening weekend?
Joseph: Yeah. You have DJ (Dwayne Johnson) and you have Zac and that’s great. It’s always awesome for the actors because we get to just play, but I don’t know if the producers feel the same way. (Laughter) They’re probably looking at everything and hoping that something that seems like a sure hit, indeed it is that.

I think what it definitely has going for it is that we have recognized that there is kind of a new formula with that summer blockbuster film and that is one that combines comedy, action, and you bring some sexy in there. I think it’s a good recipe. I’ve done the action films where it’s serious and there just isn’t as broad of an audience for that these days. It kind of becomes more genre whereas this, it’s blending. You take “Baywatch” and you make it a little bit more tongue in cheek where you’re laughing. There’s a crude side to this film. There’re some big gags. There’s some really funny stuff going on, so it gives you that sort of “21 Jump Street” or “Ted” type of humor. At the end of the day, it’s more of a buddy flick than it is about girls on the beach.

And then you bring me on the beach and let me crack some heads! (Laughter)

TrunkSpace: Let’s say someone gave you a blank check to retool and revamp any old property and make it new again in the same way that is being done with “Baywatch.” What would it be and why?
Joseph: Wow. I would love to see a “48 Hours.” It was gritty. It was tough. It had racial tension, but it had some good guys trying to get the bad guys. I would love to see that in our political atmosphere and seeing these working class guys. You don’t get to see blue collar guys as much on the big screen because a lot of stuff these days is either you’re taking over the world or not. (Laughter) So yeah, something like that I’d like to see revamped.

I also love “Coming to America.” That’s one of my favorite films.

TrunkSpace: And imagine that one retooled in our current political climate!
Joseph: Yeah. Totally different. We wouldn’t have a movie because they would have been stopped at the border.

I also like love films. There’s a film that starred Billy Dee Williams and Dianna Ross called “Mahogany.” I would love to do something like that with like a Rihanna or Beyoncè. That would be amazing!

“Baywatch” arrives in theaters this Friday.