Highlighting one of his biggest roles to date, Joseph Gatt has been reveling in the build up to this Friday’s release of the live screen reimagining of “Dumbo.” Portraying Neils Skellig in the film, a South African big game hunter who works for Michael Keaton’s Vandevere, the London-born actor doesn’t only appear on screen with one of the greatest cinematic names of all time, but he does so by stealing the scenes he appears in. Not too shabby considering one of his costars is a flying elephant!

We recently sat down with Gatt to discuss his excitement for the project, the reason he thinks the film will be embraced by a multi-generational audience, and why working with Tim Burton was so empowering.

TrunkSpace: “Dumbo” is a huge film. It features a stacked cast and a director who is an icon in the industry, Tim Burton. You’ve been in the industry a long time, but is it hard not to get excited about being involved in a project of this size and scope, especially when the trailer hits and the reactions from the public start to trickle in?
Gatt: It’s impossible to not be excited for this movie. It’s one of my biggest movie roles to date and it’s in one of the most high profile movies I’ve worked on to date. It’s been in post-production for almost 15 months, so the anticipation is overflowing. I’ve seen clips when doing ADR and they all look fantastic. There’s something in this movie for everyone and I’m incredibly excited to see the joy it’s going to bring.

TrunkSpace: On the opposite side of that coin, does a part of you have to separate yourself emotionally from a project like this once you call wrap? In an industry where so much is out of your control, can that get magnified even more so when it’s on a film this large?
Gatt: Letting go is one of those things you learn to accept as an actor. Some find it easier than others. The best that one can do is their best job while the cameras are rolling and hope that the editor, director and producers keep it all in! (Laughter)

TrunkSpace: Obviously “Dumbo” is based on an iconic brand and character. Because of that, was there a sense on set that the way to handle the live action adaptation was with respect to everything that came before? How do you take a classic and give it the remake treatment without alienating those who fell in love with the original?
Gatt: Unlike many of the other Disney live action remakes, “Dumbo” is a new rendering of the original, rather than a remake. Ehren Kruger 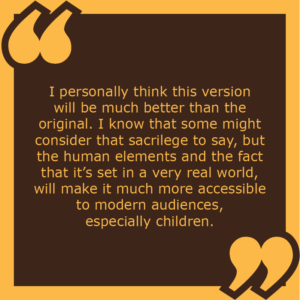 has written an incredibly clever and inclusive screenplay that maintains the basic story, character and heart of the original, but at the same time brings it totally up to date with wonderful human characters and modern philosophies, combining modern human ethics and socially conscious ideals. All of this is done while still being set in the early 1900s and all looking very beautiful and Tim Burton indeed. I personally think this version will be much better than the original. I know that some might consider that sacrilege to say, but the human elements and the fact that it’s set in a very real world, will make it much more accessible to modern audiences, especially children.

TrunkSpace: Your character has one of the best cinematic names of all time, Neils Skellig. What did you like about this guy when you first read for him that made you go, “Okay, I can see me bringing this guy to life and I’m the right person for the role?”
Gatt: Ha! Yep. Too right! As soon as I read the script I knew this was going to be a fun role. Actually, a fun challenge. I had to learn a South African accent for the role. I’ve done many different accents for roles over the years, but this was a first. Also, Skellig basically stands for everything that I am totally against. His principals and motivations are the total opposite to mine. He’s a bully and hates animals. Animals to him (and people) are simply a means to an end. Props to get something done. And when that thing is done… the “prop” is discarded… and not in the most pleasant ways. Occasionally those discarded props become other useful objects to him, like clothing. I think the last time I played someone this sociopathic or hateful was playing The Albino in “Banshee.” Like in that instance, I had to find some way to like or connect with Skellig. I connected with his passion and his military fastidiousness and addiction to doing things perfectly right. Luckily for me (but not the world as a whole) there are many people in the world as hateful as Skellig, so doing the research was a matter of some Google searching and watching YouTube videos. The other wonderful thing was that Tim wanted all of the human characters played very real and grounded. Nothing over the top or superficial. Everything was to come from a real place. I loved creating this guy.

TrunkSpace: We mentioned already that Tim Burton directed the film. What’s a note or piece of advice that he gave you during the shoot that you’ll carry with you throughout the rest of your career?
Gatt: There wasn’t a single thing he said or did. It was the overall experience. Tim is a true artist. He paints his movies. Every detail matters to him so much. He does his work with the utmost grace and respect for all of his family. By “family,” I mean the whole cast and crew. He’s like a guiding father figure. I never heard him raise his voice to anyone, even in some very stressful moments. He trusts his actors to make the right choices and then directs with suggestion rather than orders. He is always open to discussion and you leave set every day feeling like you’ve been an important and collaborative part of the creative process. If I had to use a single word to describe working with Tim, it would be “empowering.”

TrunkSpace: We’re nearing the premiere date for the final season of “Game of Thrones.” As someone who has made a stop on that series, is it special for you to have been even a small part of that world given the impact it has had on people and pop culture? Where does it rank among your career highlights?
Gatt: I have been a fan of GoT since it began and was so excited when Dan (Weiss) & Dave (Benioff) invited me to be on the show. It didn’t quite work out exactly as planned, since the role was changed drastically last minute due to major script revisions, but it was still a tremendous experience. It was an amazing cast and crew and we had a lot of fun in Iceland and Northern Ireland.

TrunkSpace: You also starred as The Man on the series “Z Nation,” which is a show with a very loyal fan base. As an actor, what is it like getting to work on a series that stretches beyond casual viewership and has a group of people invested in where the story and characters are going?
Gatt: I’ve had this experience before with “Banshee” and “Teen Wolf.” It’s pretty amazing when the fans are so invested in the show and characters. It’s almost like doing theater, where the connection is so immediate and visceral, and you know exactly how they feel about you right away. Nothing withheld. It’s also incredibly fun and the fans are very interactive. They partake in the live tweeting the cast does for each episode and almost guide the writers to make certain choices regarding characters. The Man was a tough push with the fans because I was going up against their favorite and beloved characters. After a while they started to love The Man. I think it was because I worked really hard to give them a fully rendered three-dimensional character with real motives and feelings instead of a simple bad guy. It had the audiences torn between loving and hating The Man! In fact, the audiences liked the character so much by the end of the season that there was a bit of a social media outcry when he didn’t return for the following season.

TrunkSpace: That is also a show where it seems ANYTHING is possible. What is the craziest on-camera moment that you found The Man in where you couldn’t help but say to yourself, “Well, I never envisioned this for my career…”?
Gatt: I’ve done some pretty crazy stuff on camera during my career, but eating brains probably tops the strangest! Yep, never thought I’d being doing that one, but I guess it was inevitable. Especially since I escaped being turned into a zombie! The funniest part was having the director demonstrate the correct way to eat brains. There is photographic evidence of this hilarious moment. I can tell you it was not pleasant. The “brains” were made from a gelatin substance covered very liberally is red corn syrup. I was directed to take a very large bite, which had me almost gagging as we shot the scene. It’s not something I’m excited to do again, but it made for some very entertaining viewing.

TrunkSpace: You also do a ton of voice acting, particularly for video games. Do you take a different approach to voice acting than you do with on-camera work? Where do the two differ most for you?
Gatt: I love voice acting. The beauty of voice acting is you can get to play multiple roles on one title. I think I’ve done about 15 roles on The Elder Scrolls Online, all varied voices and accents. It’s also given me a chance to play a Sith Lord. Not just a regular Sith Lord, a romanceable Sith Lord. Lord Scourge (from “Star Wars: The Old Republic”) was such a hit with the players that they wanted to make him a romanceable character, so I had to go into the studio and do a session with Scourge making out with people and saying romantic lines of dialogue.

My approach to voice acting is very similar to my on camera work. I move around a lot and encompass the physicality of the role as much as possible. The only difference is that I can roll into the studio in my PJs or gym sweats and don’t have to do my hair. (Laughter)

TrunkSpace: Time machine question. If you could jump ahead 10 years and get a glimpse of what your career looks like a decade from now, would you take that journey? If not, why?
Gatt: Nope. No good can come of it. Because either you’re going to see a wonderful life and then spend your whole life trying to make the right decisions to reach that point, or it’ll be horrible, and you’ll spend your whole life trying to avoid it. Either way, you’ll be missing the best part. The journey. That’s where the gold is. And there’s no point if you keep looking for the end of the tunnel and miss all of the adventure on route!

“Dumbo” flies into theaters this Friday.