Jonathan Lloyd Walker has had a remarkable career trajectory, from actor to writer to current showrunner of the fan-favorite series “Van Helsing.” Although he has been performing since he was a kid, its his current gig as the man behind the series curtain that he is most excited about.

“Interestingly, I get more personal enjoyment now out of showrunning,” he said in an exclusive interview with TrunkSpace. “It’s the pinnacle for any TV writer as you get to influence and shape a project in the most significant way.”

Season 4 of “Van Helsing” kicks off on September 27 on Syfy.

We recently sat down with Walker to discuss showrunner duties, not messing up a good thing, and the emergence of Dracula.

TrunkSpace: Actor. Producer. Writer. Showrunner. That’s a lot of hats, but which one would you say you feel the most comfortable wearing? Which one do you get the most personal enjoyment from?
Walker: I’ve been a performer since I was a kid so there’s a certain degree of comfort and satisfaction doing that work. Interestingly, I get more personal enjoyment now out of showrunning. It’s the pinnacle for any TV writer as you get to influence and shape a project in the most significant way. I thrive on the pressure of it and, while taxing, the fulfillment of delivering something you’re proud of is second to none.

TrunkSpace: You’re currently serving as showrunner on the series “Van Helsing.” For those who aren’t familiar with the term, walk us through what your day-to-day duties are in bringing the fan-favorite series to the masses?
Walker: Showrunning doesn’t really have a conventional day-to-day schedule. For the early phase of the job you spend your time breaking and writing story in the writer’s room. That’s the really fun part, bankers’ hours knocking around ideas with a room full of passionate, funny, smart creatives. Then, as you get closer to shooting (prep) you spend a lot of time doing fairly bureaucratic, but vital things. Mostly meetings to orchestrate and plan how to get the scripts shot in the best possible way. The hours start to ramp up during this phase because there’s still writing to be done along with all the meetings. Then filming starts and things get even busier. Casting, shooting, post production, more meetings for the next episodes, network calls and on… and on. For those who really want to take a deep dive into the world of the showrunner there’s an excellent documentary about it. Here’s a link.

TrunkSpace: Because you are also an actor and have spent years working in front of the camera, do you think that gives you a unique perspective in the position that perhaps other showrunners don’t have? Where does that knowledge benefit you most? 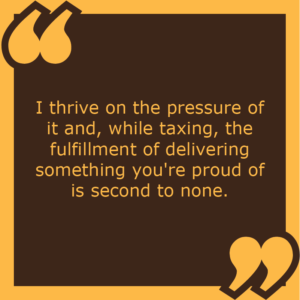 Walker: I think showrunners in general have to have some understanding of what actors do and how they do it. It’s not really enough to just decide what you like and what you don’t like in terms of an actor’s craft. So, for me especially, I have a pretty well-tuned ability to communicate with my cast because I really intimately understand their craft. It’s always my hope to not just give the cast notes or explanations for why a line of dialogue is there or what the context of a scene is but also give them useable input, in their own language, that allows them to fold my thoughts into their performance. Beyond that, I’ve got an obvious soft spot for actors, especially the challenges of that profession both on and off camera, and I hope they know and feel the respect and love I have for them and their work.

TrunkSpace: You took over as showrunner on “Van Helsing” in its fourth season, which will premiere September 27. Is there less pressure taking on such a demanding position when a series is already established as it was with “Van Helsing,” or does a part of you feel pressure to not only carry forward with what has already been put into motion, but also to leave your own mark on the series?
Walker: I guess I’ll only know the answer to that once I’ve had my own show greenlit. From working alongside showrunners, I certainly understand the pressure they face starting a brand-new show. It’s often a process of trying to figure out what makes a series tick, what style and tone work best, what roles and performers jump out or fade away… and whether the network are happy and then whether the show finds an audience. Those are much bigger hurdles than simply taking over the showrunner seat. Meanwhile, I have a fairly large degree of pressure being a new showrunner on an established show… mission number one is to not mess up a good thing. Put your own stamp on the series (which I think I have) but don’t break what makes the show work. Ultimately you have to prove that you can execute the series at least as well as the previous showrunner. Nobody wants to take over running a show that’s had several seasons and then get it canceled.

TrunkSpace: “Van Helsing” has a very loyal following. What can you give them – tasty morsels of what’s to come – to get them excited for the upcoming season?
Walker: In Season 4 darkness dawns. It’s no secret that, after several seasons or hinting at it, Dracula returns (played by the remarkable Tricia Helfer). Now Vanessa Van Helsing and her allies have to fight not just vampires but the mother of all vampires. Some new allies will be joining the fight and some much-loved characters will say goodbye. We’re also going to take the storytelling in new directions by shooting in some remarkable new locations, episodes shot in ways we’ve never attempted before and an overall feel that the show is taking some risks and pushing the boundaries. I’m excited to hear what the fans think and I’m thankful for their support.

TrunkSpace: You’re no doubt in the thick of it with seeing Season 4 of “Van Helsing” finalized, but on top of that, you’re also set to star in the television adaptation of “Snowpiercer,” which will air in 2020. When you’re working on a project strictly as an actor, is it difficult to shut off your producer brain and focus on your own character and his journey?
Walker: Good question. It’s a challenge but because it’s where I started, I can totally just focus on the acting and stay out of the other work. “Snowpiercer” is a huge show, very complex both in storytelling and in terms of the big machine required to execute the series. Graeme Manson (“Orphan Black”) is a remarkably-talented writer and showrunner so it was very easy to just follow his lead and trust that everything was being dealt with.

TrunkSpace: I feel like we’re throwing a lot of “alsos” at you, but also kind of seems like your specialty. In 2019 alone you have “Van Helsing,” “The Murders,” and “Wu Assassins,” for Netflix. We hear people say all of the time in this industry that “when it rains it pours.” Would you say that is your experience as well, in terms of projects always sort of accumulating and being released around the same time?
Walker: I’ve had the busiest year I’ve ever had. I’m very fortunate to have been offered all this work and that the people involved were willing to share me and my time. But like anyone in this business you’re never that far away from unemployment. And when it comes you never know how long it lasts. So, I count my blessings regularly. In terms of all the work releasing around the same time… a bit of a fluke really. Having four shows all airing within six months of each other is an anomaly but… I’m glad to have a lot to talk about!

TrunkSpace: You have been acting since the early ‘90s. Do you still love it as much today as you did the first time you stepped onto a set?
Walker: I still love the craft and the excitement of being on camera. But nothing will ever come close to those early days of being on set. It was all new, exciting and the beginning of a journey. Now I’m a long way down the road but the journey is still an enjoyable one. I guess if anything has really changed it’s the degree to which I feel comfortable as an actor being on set.

TrunkSpace: What has been the highlight of your career thus far?
Walker: I’d like to say they keep on coming! But if I had to pick I would say working as an actor on the feature film “Shooter.” It was my first really big role on a huge Hollywood movie. The director, Antoine Fuqua, was so supportive of me and gave me a confidence in my craft that I didn’t know I could have. The cast were incredible too. It was also shot over a summer during which I had a week off and got engaged to my wife in Florence, Italy so… many reasons why that project will live in my memory forever.

TrunkSpace: Time machine question. If you could jump ahead 10 years and get a glimpse of what your career looks like a decade from now, would you take that journey? If not, why?
Walker: I wouldn’t. Simple reason; it would cause issues either way. If I found out my career just kept on climbing and I was ever higher up the food chain making incredible work, I think it could make me complacent. There’s a certain spark that comes from not knowing what the next job will be, or if you’ll ever work again, so to lose that by knowing you have a bright future would perhaps jeopardize it all. If I got to the future and I was an abject failure or worse, deeply unhappy, then I think it would freeze me now in a state of total panic. So not knowing is likely better in both scenarios.