We recently sat down with Keltz to discuss the Hallmark Channel community, why his friends razzed his royal credit, and how producing changed his perspective.

TrunkSpace: This is your first time working with Hallmark Channel. What did you take away from the experience as a whole?
Keltz: I had a blast working on this. I was just so lucky we had such a great group that we were collaborating with. Megan Park, my co-star, is an old, old friend of mine, but we never had a chance to work together. Alex Wright, our director, and Maura (Dunbar), our producer, are really great as well. It’s just a really great energy on set. It’s such a fun little family community that they’ve got making these things, so I hope I get a chance to do more in the future.

TrunkSpace: The success of these movies hinges on the chemistry of the two leads. Do you think the fact that you and Megan knew each other allowed both of you to hit the ground running in that regard?
Keltz: Absolutely. I mean, I hope it all translates, but for us it was so nice getting to have a partner in crime that you can know and trust, and can dive in with, because these shoots are pretty quick, and pretty intense. So it’s nice to have somebody that you know you can trust, and sort of go with you through it all. It was great.

TrunkSpace: Aside from being a prince, your character is moonlighting as a public relations professional. Your mother worked in public relations, which is a kind of cool full circle scenario. 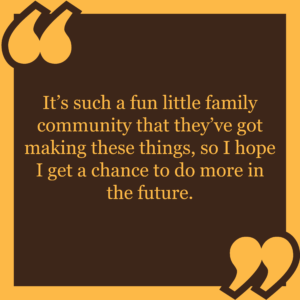 Keltz: Yeah, she did. So the character actually uses PR as a ruse. That’s sort of his cover job identity. Before she knows who he is, he says he works in PR, but then she finds out that he’s a prince, and his working title is a little bit different than the rest of us common folk. But yeah, my mom, her background, is in PR as well. She did all the publicity and PR and sort of helped in the early days of Ms. magazine, back in the day. Then she had her own PR company called Karin Lippert PR – KLPR – in New York. She did all the publicity for the “Donahue” show in its later years in New York. She’s done a lot of stuff. She’s always been involved in activism, and civil rights, and human rights as well. She works with the Human Rights Watch Film Festival in Toronto, and Democrats Abroad. She and my dad were just in Washington, marching for the March For Our Lives this past weekend.

TrunkSpace: Did you get razzed by any of your friends outside of the industry for playing a prince in “Once Upon a Prince?”
Keltz: Oh, definitely! Yeah, there was definitely a good bit of razzing and joking about it. Of course, I let them know that, “Well, maybe at some point in the movie, I become king, so they better watch what they say.” (Laughter) But no, it’s great. I’m lucky I got a nice support group both here in LA and Toronto, and some friends all over the place, that they keep you humble. They do a good job of letting you know what’s really up.

TrunkSpace: What’s great about “Once Upon a Prince” is that it’s a classic tale of love not meant to be. It’s got elements of that “Romeo and Juliet” perspective.
Keltz: Yeah, just two people who the world is trying to keep apart. The question is, whether or not they can overcome those odds. I think that since this is a Hallmark movie, the odds are in our favor, but I guess we’ll just have to see.

TrunkSpace: Why do you think Hallmark Channel continues to build its audience with movies like “Once Upon a Prince?”
Keltz: Well, I think something that is the trademark of who they are, sort of the energy with which they do all their films, and TV shows, and everything… that although there can be some dark times and dark things happening around us, people turn to entertainment to be lifted up in some way, and to escape a little bit. I think that Hallmark does a good job of bringing that warmth, and that love, and that light into people’s homes.

TrunkSpace: There’s something kind of nice about ending a story on a happy note and carrying that positive vibe with you.
Keltz: Totally. I mean, we’re all looking for our own happy ending, so I think it’s nice to get to see a few on TV.

TrunkSpace: You mentioned having known Megan previously. Did you two know that each other were going out for the movie or did it all just sort of happen by chance?
Keltz: No, it happened through serendipity. We hadn’t seen each other in probably seven years or so before we started shooting, so it was so nice to be able to reconnect through the film, and get a chance to catch up, and spend some time together, and reconnect.

TrunkSpace: We know that you’re also producing. When you’re working on something like “Once Upon a Prince,” which moves so quickly on the production side, do you sit back and view things with your producer’s hat on as well and apply things to your own productions and how to make them all run smoothly?
Keltz: Yeah, definitely. I think that since I’ve been doing a lot behind the camera, I can’t really not do that now. It’s something that I realized I was sort of more unconsciously doing before. Now it brings an all hands on deck mentality to the way I like to work. So if there’s anything I can help, or pitch in and do… I say the main goal whenever you’re on a production is, “How can we be the most efficient?” Because the most finite resource you’re ever dealing with is time, so how do we make use of the time and get as much as we possibly can, so that we can make this the most creative, and the most efficient project. Being able to produce and act simultaneously, I think it’s helped. They sort of helped each other out. I hope I was more help than in the way on this one. (Laughter)

TrunkSpace: You just wrapped your first feature film as producer, “Acquainted.” As far as experiences go, is that one that is a mix of both excitement and stress?
Keltz: Oh absolutely, yeah. I jovially say it was the single hardest thing I’ve ever done in my life. It was a labor of love, and I’m so fortunate just because making a movie is quite a feat, and I’m just so glad we were able to do it. We’re almost done with post-production now. It’s a group of us that are very close. It’s something that the director and I have been championing for the last three years, so I can’t wait to have it finally be done and to share it with the world.

TrunkSpace: Is it one of those things where it is both the single hardest thing you ever do, but at the same time, as soon as you’re wrapped you want to do it again?
Keltz: Absolutely. I think it’s very much the epitome of this industry, and so many of those that are in the creative arts. People ask me what I want to do with my time off, and basically by the Monday after I wrap shooting something, I’m already restless, so it doesn’t really stop. It feels like it’s a part of me.

“Once Upon a Prince” airs tonight on Hallmark Channel.