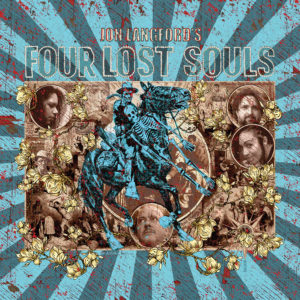 When terrible things happen in the world, particularly those that impact so many people, it’s difficult to proceed forward as if that something never happened. In the case of TrunkSpace, interviews can sometimes become conversations – discussions about the topics that, by chance and circumstance, have the power to connect absolute strangers and remind us that we’re all human.

A day after the tragic events in Las Vegas and the passing of musical icon Tom Petty, we were scheduled to sit down with Welsh-born musician Jon Langford, founding member of the Mekons and the Waco Brothers. Langford, who is currently in Los Angeles working on new material with the Mekons, recently released the solo album “Four Lost Souls,” but it was the souls lost and the ramifications of a particularly difficult news cycle that brought our discussion in an unintended direction.

TrunkSpace: We’re speaking a day after the passing of Tom Petty. Did he have any impact or influence on your career or music?
Langford: I loved Tom Petty. I thought he was fantastic. I just loved the economy of his music, how uniquely American it was. And I love the fact that, the only music my 15 year old and I kind of share, was Tom Petty. He loves Tom Petty as well, and that’s really strange because most of the stuff he listens to, I don’t know what it is. He was playing Tom Petty off his phone onto the aux in my car. I was going, “You like Tom Petty?” I was talking to him about Tom Petty, and his involvement with George Harrison and people like that. It just felt like he was someone everyone could kind of like, in a way. It was great pop-rock music, that was just done so right. He understood the spirit of rock ‘n’ roll so much.

TrunkSpace: And even those people who didn’t connect with his Heartbreakers work, they tend to reference his time in The Traveling Wilburys as a way his influence still touched them. 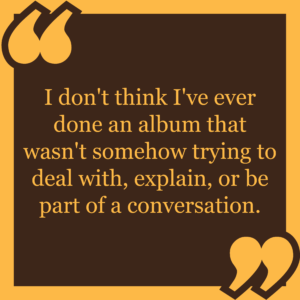 Langford: Yeah, I loved the Wilburys when they come out. I thought it was fantastic. I thought, what a great idea to have all those people in a band together. Who wouldn’t want to be in a band with Roy Orbison? Kind of amazing.

It’s very sad. Yesterday was just a terrible day. It was a day to stay off social networking, because it’s sort of idiocy that goes on with the social platforms. “Tom Petty’s dead. No he’s not dead. I’m gonna kill you because you said he’s dead.”

Then there’s ISIS, claiming responsibility for an old white guy going to Vegas with automatic weapons. Like ISIS is targeting old white guys who live on golf courses now, and radicalizing them? It’s just a fucking load of nonsense that people are using all these disasters to profit, and sow confusion, and promote really crazy political agendas.

TrunkSpace: It feels like we’re in a very divide-and-conquer time.
Langford: Everything. Everything that comes up. There’s guys like, “Oh no, he’s not ISIS, he’s a Bernie Sanders supporter, and he did it because he doesn’t like Trump.” Like Bernie Sanders supporters are all toting automatic weapons. It’s a fantasy world, and it’s the complete death of consensus. It was a day yesterday when people should have shut up and thought about what happened. It’s an opportunity. That’s the way after 9/11 was. That was a huge opportunity that people like Cheney and Rumsfeld saw landing in their lap – to change America into what they wanted it to be, and they ran with it straight away.

Something like this that happened yesterday, it kind of screams out to me. Maybe there’s too many guns around if the guy’s got a hotel room and a house totally packed with weapons that can cause so much mayhem.

TrunkSpace: You mentioned 9/11. After that day, there was a sort of unified response from the population. We all came together. Now a tragedy happens and we instantly take sides.
Langford: Absolutely. I think the isolation of social media, and the power it gives people to be keyboard warriors, has given people the right to say whatever shit they feel like. Racists and idiots who didn’t want to open their mouths because there was a stigma to being a racist before, are being completely liberated. It’s a disgusting situation, and it’s not gonna get any better.

TrunkSpace: Maybe that makes music more important than ever now? A group of people can get together at a Jon Langford show and find a unified focus. It can be the community that we seem to be losing within our own communities.
Langford: Well, I hope so. That’s the point for me, is to be part of a conversation. That’s what this album is about.

TrunkSpace: Most people make the conscious effort to decide if and when they’re going to make an album, but for you, the universe sort of got the wheels in motion on “Four Lost Souls,” right?
Langford: Yeah, it was a suggestion by Norbert Putnam, of all people. We ended up playing some Johnny Cash songs at the opening of the exhibit of the Country Music Hall of Fame. People thought that would be a funny idea, to have an old Welsh punk rocker singing Johnny Cash songs with basically the entire cast and crew of the Nashville Cats from 1960s. (Laughter) It was great, lovely. I had Lloyd Green, Mac Gayden, Wayne Moss, David Briggs, Norbert Putnam, and Charlie McCoy as my backing band. We all had a great time. I always find music to be very inclusive like that. If you play music with people, a lot of things melt away.

I had a few glasses of wine with Norbert Putnam and he told me I sang like a pirate, and maybe I’d like to come to Muscle Shoals and record an album, because he’d moved back down there. It was a strange thing. I didn’t really take it very seriously at first. Then he asked me again, and he seemed to be really keen on the idea, and he told me how it would work and how we’d have David Hood playing the bass. And I got to go, I got to go and do this thing, but why would I go to Muscle Shoals and what would it be about? Then the songs just started popping out.

It was like a great suggestion that an old Welsh punk rocker would address his relationship with a fairly alien part of the world, that affected his life so much. It’s a double-edged thing, this incredible blossoming of creativity in the 20th century, that gave the world so much. It’s what I think is great about the American way. I was attracted to America’s rock ‘n’ roll and through rock ‘n’ roll came jazz, blues, country, Cajun and all these other forms. Then this kind of terrible legacy of the Civil War, slavery, Jim Crow, the things that were done during the civil rights years – there’s that legacy, which I was writing those songs not thinking that was all about to burst out of the ground again, like it did when Trump got elected.

The songs were kind of concerned with that, but it’s kind of a bit alarming that I wrote a song, “In Oxford Mississippi,” about how the Civil War never really ended for some people and how the memorials, Daughters of the Confederacy, put these memorials up and they’re bigger than the memorials to great Americans who struggled during the Civil Rights Movement. To those people, the Civil War is more real and important, or the Old South is more real and important, than the advances this country has made. I thought that was kind of frightening and worth pointing out.

And then within a few months of writing that song, we’ve got this whole issue of Charlottesville, and the Confederate statues coming down, and a president who compares Robert E. Lee to George Washington. He thinks they’re like cool historical figures, beautiful guys. It’s a fucking mess you’ve found yourselves in, I’m afraid.

TrunkSpace: With all of the social and political divide going on, it does seem like songwriters are using their platform to say more. The things that they’re concerned with now, on a larger scale that impacts us all, they’re more willing to talk about that now and use their platform.
Langford: I suppose that’s a positive thing. When you’re in the middle of a culture war, it’s kind of inevitable, unless you’re a complete moron. I don’t think I’ve ever done an album that wasn’t somehow trying to deal with, explain, or be part of a conversation. Yeah, I mean if other people are doing that as well, we’re kind of burrowing on the fringes of it already. It’s not like the Mekons or the Wacos or myself are in any way popular culture. We’re kind of unpopular culture. But you do what you can do, and when I write songs, that’s the stuff that comes out.

TrunkSpace: Do you use your writing as a way to work through the stuff that you’re seeing and absorbing?
Langford: Yeah, I guess so. You try to find something that’s universal, something that someone else might pick up on. You try not to make them too obvious that they’re just banal. It’s a tricky thing. I think songs are fantastic. I’ve spent a lot of my time listening to, and being moved and inspired by other people’s songs. And sometimes I don’t know whether what I’m getting out of them is what they intended, but that’s part of the beauty of it.

TrunkSpace: Absolutely. And when multiple people are connecting to a song in a different way, there’s something special about that.
Langford: With this album I could write a paragraph about what each song’s about, and it would be kind of pointless because I feel like the songs, they would be failures as songs if people needed to be walked through them.

TrunkSpace: And we’ve all experienced that – finding something to connect with in a song and then hearing, possibly years later, the meaning of the song itself and thinking, “Wow, I was completely off base.”
Langford: Well, there’s a great story about Picasso when he was describing the symbolism of Guernica in the 1930s. He said, “This is this, and this is that, and the horse is something, then the bull is fascism.” And then in the 1970s he was talking about it and he went, “This is this, this is that, and the bull is Spain.” It’s an incredibly powerful picture. You look at it, it’s an absolutely very, very powerful, angry, amazing picture, which I get a lot out of, and even he couldn’t really know what he meant. He made it, but he can’t dictate what it means to the point where he contradicts himself.