Fans of the series “Bosch” were recently served a third course of binging when season 3 of the gritty police procedural premiered on Amazon Prime. Series star DaJuan Johnson has seen his character Rondell Pierce go from officer to detective in the span of those three seasons and it’s a promotion that “Bosch” diehards have been eating up. To further satiate the appetites of its hungry subscribers, Amazon recently announced that the series has been renewed for a fourth season.

We sat down with Johnson to discuss how the series has changed his life, how choosing his own adventure as a child has prepared him for an adulthood of crime solving, and how going super would be pretty super.

TrunkSpace: How has “Bosch” altered your life and career the most?
Johnson: You know, I think it opened up a lot of fun doors for me. I played cops or detectives before, but I think once “Bosch” came out and I had a big role in it for season 1, I think more people took me a little bit more seriously. And I think I looked really good in the uniform back then. (Laughter) It just gave me some more… I’m such a nerd. I was going to say beat cred instead of street cred. (Laughter) That was a bad joke. I’m sorry.

TrunkSpace: It’s funny because you mentioned you have played cops in the past and we actually noticed that you have played quite a lot of authoritative characters.
Johnson: (Laughter) I’m laughing because I think of myself with my kids and I try to be that authoritative dad with them and they don’t listen. They’re just kind of like, “Dad!” (Laughter) It’s nice to be able to play one on-screen.

I think that one of the cool things about all of the cops and detectives that have come into my life is just that when I was younger… I’ve always loved this… but when I was younger there were the “Choose Your Own Adventure” books, “The Hardy Boys” or, maybe I dabbled in the “Nancy Drew” stuff, but I loved to solve the mystery or solve the cases, so it’s kind of cool to really do that in real life.

TrunkSpace: Those “Choose Your Own Adventure” books is where it was at, but it was easy to cheat and disregard your chosen adventure if you didn’t like the results. (Laughter)
Johnson: (Laughter) Yeah. And then just go backwards. I loved those. I don’t know why they’re not around.

TrunkSpace: Well, with the way that technology is advancing, we’re getting to a point where “Choose Your Own Adventure” could wind up in television or film and the audience could quite possibly decide how a story progresses and ends.
Johnson: Ohhhh… man. Mind blown! Imagine that? (Laughter)

TrunkSpace: You’re three seasons in and your character has been promoted to detective. As you look back over your time on the series thus far, where were you the most challenged strictly from an acting standpoint?
Johnson: You know, I would say it’s this season… the season as a whole. Being promoted up to detective and really just like, okay, where has Pierce been before this? He was an officer. He’s a by-the-book guy. My partner got shot last season.

No spoiler. That was season 2, so if you haven’t seen it… (Laughter)

Let me back up. Actually, some of the things that I feel very responsible about doing… if I hadn’t done a couple of things in our relationship with my partner… telling him I didn’t want to work with him and all of this stuff, maybe he would still be alive. So this season itself and really just jumping into detective while still holding my values of a by-the-book guy and I think just stepping up to the plate with all of the big boys this season. That’s the challenge. Working with Titus. Working with Paul. Working with Amy. Hands on. I’ve worked with them before, but really, all eyes are on you now. I think this season has been the challenge. A good challenge.

TrunkSpace: Is this the longest you have ever spent with one character?
Johnson: Umm… yeah. I guess when I think about it, yeah. I did nine episodes this season. I’ve done a nice stint on “General Hospital” and some other things, but I think this is the biggest one. 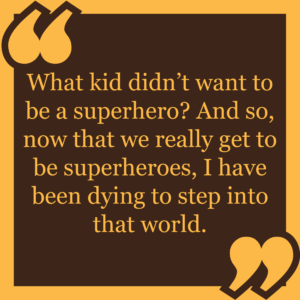 Way to bring it home! Way to make me think about it! (Laughter)

TrunkSpace: (Laughter) From a character arc standpoint, that must be so interesting to play someone who you know, but at the same time, not necessarily knowing where he is going?
Johnson: It is really fun to discover where you go, but it’s also cool because I have a base. You have a base of like, “I know my values as this character.” I know my North Star, if you will. Then we get to branch out. We talked a little bit about a wife. We talked about if Pierce will ever go to a not-so-great place. Just different things like that and I think are really kind of cool that I get to keep exploring and keep peeling back the onion layers, if you will, of this guy.

TrunkSpace: With shows like “Bosch” being released all at once, does it change the experience for you as an actor as it gets rolled out? Does it feel more like a movie than a television show upon release?
Johnson: That’s so funny you said that because, yes, and I got asked this question a couple of times on Twitter. The shooting experience is exactly the same… the set of time that we’re actually shooting it. But when it comes out, it’s like this… “YAY!” And then a week, two weeks, or maybe a month the fanfare kind of dies down. And it’s a little bit for me… I don’t know about anybody else… it’s like, “Gosh, we just spent six months shooting this and people have devoured it in 24 hours.” (Laughter) And it’s over. It’s very interesting. Again, I’ve never had that experience before, so it’s very interesting to witness it.

TrunkSpace: The way you just described it in terms of spending six months shooting it and then people devouring it so quickly, that really puts the term “binging” into a new perspective. You essentially spend all of this time preparing a meal and setting the table and then it’s gone so quickly.
Johnson: You are. I’m very interactive with my social media fans on Twitter and stuff like that and I’ve got to tell you, we’ve got some major “Bosch” fans out there and that’s really awesome. I was blown away when it came out on Friday and literally by Friday night or Saturday morning, people were like, “I’m done.” I was like, “What?!?!” (Laughter)

TrunkSpace: The series was recently renewed for a fourth season. When a show is already guaranteed to return, does that change the mindset of an actor? Does it take pressure off and allow you to be more selective in the other things you’re choosing to do, knowing that you’ll be returning?
Johnson: Well, you never know if you’re returning to your show or a season until that season starts. (Laughter) For me, as an actor, I just love to live in that moment. I love to live in that moment, live in that season, and live in what’s going on because you could be working on the first five episodes, and you don’t know it yet, but you could die in episode 10. So I take it moment to moment and I really just dive in. “Where are we going with this and what would I like to do here? How can I just be present and fully engaged in this character?”

But, I think I’m coming back for season 4. Unless you’ve heard something? (Laughter)

TrunkSpace: No. No. Although, nowadays a big thing is the shocking first episode of a new season character death.
Johnson: I think this interview should be over. (Laughter)

Why are you putting doubts in my mind?

TrunkSpace: Sorry. No doubts. Let’s think of it like this. ANOTHER character could die in the season opener and Pierce could be elevated even further!
Johnson: You know, one of the things I did was start a hashtag called Team Pierce. I would have that hashtag going. “Stay strong, #teampierce fans!” (Laughter)

TrunkSpace: What was your journey like from your home in Florida to your move to Los Angeles where you set out to pursue acting as a career?
Johnson: You know, that’s a great question. To be real honest, it was an easy/hard one because all of my family is either in Chicago or in Miami. My mom is in Miami. So leaving all of that to come out to this unknown… luckily I have what I call my village that supports me and my village is basically the people I went to theater school with from the University of Florida. There’s about 10 of us out here that really support each other in our acting. One of my very best friends is on “Orange is the New Black” so we’ve been supporting each other as this has unfolded.

But, just from a physical standpoint, as that young actor, I didn’t feel like I got it or that really things clicked for me until six years of being out here. And I hate to put a number on that because I get worried about people reading that and saying, “Well, that’s six years and if it takes that long then…”

It takes the time that it takes for everybody. It’s just your own time. It took me that long to know the way… the right streets to take to auditions and things. Six years into it. Things started to click after that time for me. Getting the right agents, the right managers, the right roles to take and to audition for. And I think after I booked my first network television TV show, which was “Close to Home” a long time ago, I got it. I think I started to get, “Okay… this is how we operate here. I’m mentally in the game. I’m physically in the game. And emotionally.”

TrunkSpace: We spoke about the many authoritative characters you have portrayed, but as you look back over your body of work, what do you feel is missing? What type of character or project do you want to sink your teeth into?
Johnson: Easiest question you’ve asked today. I’m a big sci-fi/superhero/fantasy guy and I’m gunning for that world because that is what I loved. I’ve loved it since I was a kid. What kid didn’t want to be a superhero? And so, now that we really get to be superheroes, I have been dying to step into that world. I had a close call with it this last fall, but I was on “Bosch” so I couldn’t take this other role. I love what I do on “Bosch.” Literally, it’s so fun to do and to be there, but a little part of me was like, “The superhero dream!” (Laughter)

TrunkSpace: And you got a little taste of that already having been on “Agent Carter,” which is in the superhero universe.
Johnson: Yeah! And get this… I played a cop. I remember walking on set that first day and I was just giddy. I was like, “I’m so excited to be here!” (Laughter) Because I was superhero adjacent. I was that close to my dream and seeing this world… the Marvel Universe…

That’s my next one. My next move. I feel it. My next big move, I think. And I’ll stay there forever!