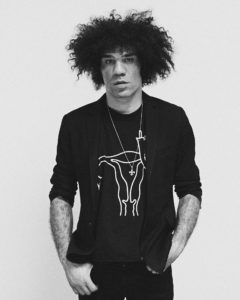 Why We’re Laughing: Combining a bad boy persona with a social commentary spin that cats like Lenny Bruce and George Carlin made iconic to their comedic brand, Azari is saying things that he hopes will resonate beyond punchlines.

TrunkSpace: Was comedy always in the cards? Were you a “funny” kid, even at an early age?
Azari: As a kid all my teachers called me a “good kid with bad behavior.” Still not entirely sure what that means. I think I was always a comedian. It was just that nobody pulled me aside and told me that that was what I was doing – they just called me an asshole.

TrunkSpace: When did you decide to pursue stand-up comedy as a career and did you make a plan for how you would attack things?
Azari: I fell into comedy from touring the country singing sad, sad blues music. I would be in dive bars in towns like Evolution Is Illegal, Idaho, just bumming everyone out. So in between songs I try and chipper things up. Didn’t take long ‘til the banter became the show. So in July of 2015 I made the conscious choice to just do stand-up without the music. That’s when I stopped my tour and did a month of mics in Chicago. I haven’t looked back since. 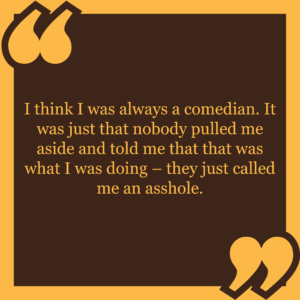 Azari: I don’t think you ever stop looking for it. Your voice changes as you grow as a human being. But I knew from the get I wanted to be a rebel comic, outlaw and going after the truth and society’s hypocrisy. Observational day to day, “this is why I’m a loser” comedy never appealed to me. I feel like we are manufacturing our own extinction as a species currently and there just isn’t time for any art to address anything but that. But that’s me – a self righteous prick who’ll whore out the revolution to get his fireman smackled.

TrunkSpace: Is the approach you take now on stage different from the approach you took when you first started out? Is it one act that grew into itself or would you consider them two completely different acts?
Azari: I think my narrative hasn’t changed much. The growth has been in learning to cut the fat and keep every sentence funny, or at least try to. Also as I progress I’m leaning more toward cleaner comedy. It’s harder and when done right way funnier, and, you can reach a larger audience. Dirty is always there if you want it. She follows you around like a three-legged dog. Clean takes a lot of thought and skill.

TrunkSpace: Is the neon “Open” sign in your brain always turned on, and by that we mean, are you always writing and on alert for new material?
Azari: It has been until recently. I did 36 shows in 27 days over 8,000 miles and four states. I was grinding the first draft of the new hour together in that time. When I got back home from that I turned everything off. Xanax, Netflix, and forcing my wife to fuck me while I lay on my back and sob for two weeks. But normally I don’t stop writing. I can’t stop if I want to. My brain just grinds constantly. Thank God I found comedy, a perfect outlet for the neurotic.

TrunkSpace: How much work goes into a joke before it’s ready to be tested out in front of a live audience?
Azari: Depends on how I feel about it. Most of them I finish pretty fast.

TrunkSpace: If a joke doesn’t seem to be working, how many chances do you give it in a live setting before you decide to rework it or move on from it altogether?
Azari: Three to five.

TrunkSpace: Is it possible to kill one night and bomb the next with essentially the same set, and if so, what do you chalk that up as?
Azari: That happens for sure. Though when you do it all the time it doesn’t feel like bombing anymore because you aren’t filled with the fear and terror that normally comes with bombing. After you do a bit enough times to know it works, when it doesn’t land or certain parts don’t hit, you know it’s the room and then you have to start playing the game to twist their minds into your narrative so similar jokes later in the set won’t die. 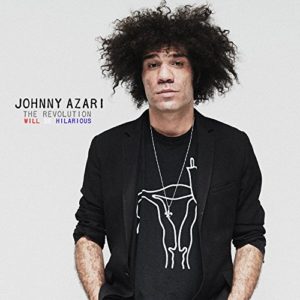 TrunkSpace: Does a receptive and willing audience fuel your fire of funny and help to put you on your game for the rest of your set?
Azari: Of course. A performer can only give the room what the room gives them. If the room feels like a roofied fat chick you have to carry to bed, then that’s how your set feels. But if they are lively and know they are at a comedy show and that their feelings don’t matter in that room, then you can have a lot of fun.

TrunkSpace: What is your most memorable performance experience (good or bad!) that will stick with you for the rest of your career and why?
Azari: I played a nudist colony once as a musical act. I closed by getting naked and singing “Blowin’ in The Wind” by Bob Dylan. They did not think it was funny. Fucking hippies.

TrunkSpace: How do you handle hecklers? What approach do you take?
Azari: I can very easily get to evil very fast so I have to check myself. Usually I can ignore it and pretend I didn’t hear. If that doesn’t work then I ask nicely. Then I talk to them like a child. If they continue, I go Adolf Hitler on their ass and make the room seriously tense. I have a bunch of handles, none of them are funny because fuck you for interrupting a staged performance.

TrunkSpace: What are your thoughts on the stand-up landscape in 2018? Are you optimistic for the future of live comedy?
Azari: Comedy is booming. It’s more popular than it’s ever been. I love seeing the range and explosion in the art. It makes me happy that there is so much to laugh at.

TrunkSpace: Finally, who do YOU find funny?
Azari: My dad. He’s a funny fuck. Besides him, all the people that every other comic says inspires them. (Laughter)