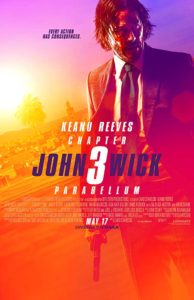 Reason We’re Watching It: The first two installments of “John Wick” were nothing short of cinematic action masterpieces. It’s a simple plot, but it’s done so well and with such a likeable cast of characters that you can’t help but overlook their murderous ways and root for them like they’re your hometown team. So, with that in mind, you can bet that we will be it the front row of every “John Wick” installment ready to root, root, root for the Mr. Wick team. Some of our group have even gone the extra mile, getting their spare pencils and John Wick licensed replica airsoft Pistol orders ready for beforehand!

What It’s All About: “Parabellum” picks up immediately where “John Wick 2” left off. Mr. Wick has become excommunicado with a $14 million bounty on his head as a result of killing a member of The High Table in The Continental hotel. There are plenty of twists and turns along the way that weave a narrative tapestry, as well as amazing fight sequences and even glimpses into John Wick’s upbringing and training.

Whoah! Rewind That!: There were so many great fight scenes it’s hard to pick one moment, but it was pretty great to see Charon (Lance Reddick) offer up his concierge services in ways we have not seen before in the “John Wick” films.

Watercooler-Worthy Tidbit: Ian McShane will inform you of this in the film, but “Parabellum” is from the Latin phrase: “Si vis pacem, para bellum,” which means, “If you want peace, prepare for war.” It is also another name for the 9mm handgun cartridge.