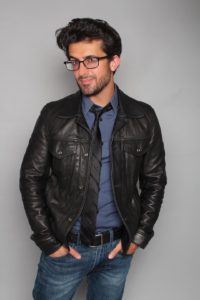 Why We’re Laughing: Superb writing combined with the kind of relaxed presence behind the microphone that puts an audience at ease, Poveromo delivers on a brand of funny that builds within the set, transforming external laughter into internal contemplation that lasts well after you leave the club.

TrunkSpace: Was comedy always in the cards? Were you a “funny” kid, even at an early age?
Poveromo: The short answer is, yes. (Laughter) The slightly longer answer is, I grew up around funny people, who all had different kinds of funny. My dad was sort of ‘life of the party’ funny, while my mom and her side of the family were very clever funny. My great aunt and uncle were from Brooklyn and no one could tell a story better than they could. They knew exactly where to inject humor into a story, and could tell it the same way every time. So in a lot of ways I grew up trying to emulate all of them. I remember laughing a lot, and thinking it was something I should bring back to the classroom, much to my teachers’ chagrin.

TrunkSpace: When did you decide to pursue stand-up comedy as a career and did you make a plan for how you would attack things?
Poveromo: I decided to do it after my first semester of college was over. I had never wanted to go to college in the first place, but that’s what you did. Doing anything else seemed like it was a one way ticket to pumping gas for the rest of my life. At least that’s what my math teachers lead me to believe. I wound up giving stand-up a shot and was hooked right away. I dropped out of college, got a full time job at a bank (as you do), and did stand-up after work and on the weekends on any stage that would have me. My thought process was, I could spend four years at a place that was designed to hammer square pegs into round holes, or I could have 10 years as a comedian under my belt by the time I’m 30 and do something I love for the rest of my life.

TrunkSpace: How long did it take for you to discover your voice as a comic?
Poveromo: I think it changes over time just like everything else. I think I had a voice in my 20s and now it’s evolving more so as I’m in the beginning of my 30s. For me it was more of a struggle of chipping away at everything that wasn’t authentically me on stage as I was off. Not to say I’m on all the time, but if you meet me off stage I’m the same guy. 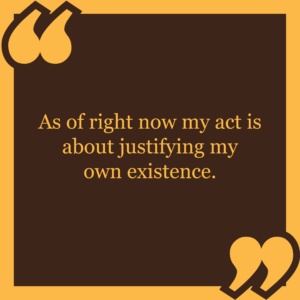 into itself or would you consider them two completely different acts?
Poveromo: The act is always evolving, but when I started I definitely would go on stage and wing it a lot. I had some ideas of where I wanted to go and what punchlines I wanted to hit, but I liked putting myself on the spot. I felt it was more important to be fast on my feet than it was to rehearse the same five minutes, club to club. As of right now my act is about justifying my own existence.

TrunkSpace: Is the neon “Open” sign in your brain always turned on, and by that we mean, are you always writing and on alert for new material?
Poveromo: I have that little notes app on my iPhone always primed and ready to go. I’ve got joke ideas and notes stored in there from 2011. Actually, I just recently sat down with a friend of mine who has a knack for organizing and he put everything into this crazy excel spreadsheet catalog thing for me. It’s really incredible. I’m not an organized person so this helped a lot.

TrunkSpace: How much work goes into a joke before it’s ready to be tested out in front of a live audience?
Poveromo: Wait, wait hold up… there’s supposed to be work involved? Hoo-boy, am I in trouble.

Usually I’ll have an idea for a joke, find out where I can squeeze it into the act and see where it takes me on stage. I’m constantly trying new stuff, if I don’t I get really bored up there.

TrunkSpace: If a joke doesn’t seem to be working, how many chances do you give it in a live setting before you decide to rework it or move on from it altogether?
Poveromo: Every comic has a joke they love that’s never worked on stage. Or works like once every three months. I think jokes can be reworked all the time and there’s some that have taken me years to perfect. At this point I know what will and won’t work on stage, but if I had to give it a time limit before you toss a joke, I’d say three times with three different audiences. If it’s still not getting the response you need, you gotta sideline it for the time being.

TrunkSpace: Is it possible to kill one night and bomb the next with essentially the same set, and if so, what do you chalk that up as?
Poveromo: Yup. Did it the other night actually. It was a showcase show and I was closing it out. The audience was only there to see their friend and they were tired by the time I got up. The set was the same jokes that killed opening for Gilbert Gottfried a couple weekends before but I was getting nothing from the audience. There’s one joke in particular that I was thinking of posting on my Instagram as an example of how a joke can crush one night and get crickets the next.

TrunkSpace: Does a receptive and willing audience fuel your fire of funny and help to put you on your game for the rest of your set?
Poveromo: Absolutely. The audience is a far bigger part of the show than they think sometimes. I had a weekend of shows mother’s day weekend, which is notoriously slow. The first night there were only 12 people in the audience but they were 12 people who really loved comedy and came for a good show and we had an absolute blast together. The next night we had about 40 people who you would have thought were taken hostage and forced to watch the show. Those are the nights when it feels like work.

TrunkSpace: What is your most memorable performance experience (good or bad!) that will stick with you for the rest of your career and why?
Poveromo: Hands down, opening up for Jimmy Fallon when I was still a baby comic. It was my first time opening for a national headliner. He was on tour prepping to take over “Late Night with Conan O’Brien” and he had come back to his home club, Bananas in Poughkeepsie, NY. We did five sold out shows together and he couldn’t have been nicer, or funnier. I met his family and they praised my set, which was amazing because I really got a sense that they understood what it’s like for the new guy coming up since Jimmy was so young when he started. Something like that will keep you going for a while. 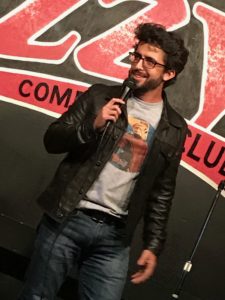 TrunkSpace: How do you handle hecklers? What approach do you take?
Poveromo: I don’t get a ton of hecklers. Not the hecklers you see comics “battling” it out with on YouTube. I perform all over the country and honestly it doesn’t happen that often. I do engage with the crowd a lot though and when that happens they tend to get overly drunk and chatty but I just handle them in a very playful way. It’s fun watching them dig their own graves.

TrunkSpace: What are your thoughts on the stand-up landscape in 2018? Are you optimistic for the future of live comedy?
Poveromo: Stand-up comedy is more important now than it’s ever been. We need comedians who are willing to push limits, cross lines, and take us to places that make us uncomfortable and laugh at the same time. We’re in Trump’s America right now, and in that America it really does seem like comics are the only ones able to cut through all the bullshit and get to what’s really going on in the world. He seems to have forced both sides of the isle into their corners to the point where liberals can no longer tell the difference between jokes and statements, while conservatives have cornered the market on the victim game. It’s kind of a weird time for comedy, though I’m staying optimistic. There’s that whole Samantha Bee thing going on right now and she’s brilliant and funny, but I really wish she hadn’t apologized for the joke about Ivanka. She apologized and called it inappropriate. Comedians are supposed to be inappropriate. Racist? No. Inappropriate? Yes. In her case, it’s her job to be inappropriate while making a point. If there’s people who can’t comprehend that, fuck’em. You know? There’s a reason why entertainers, especially comedians, don’t work at the Gap. If we wanted to let the cul-de-sac culture dictate what we do and say the rest of our lives, that’s where we’d be.

TrunkSpace: Finally, who do YOU find funny?
Poveromo: I could list a bunch of famous comics who I and everyone else I know admire here, but they get enough press. I’ve got a lot of close friends in comedy and because we’re always working the clubs and the road we don’t get to see each other a lot, but when we do it’s a blast. Just recently I got to hang out with one of my closest friends and big brothers in comedy, Joe Starr, who came to watch me at Governor’s and wound up doing two guest sets – showing us all how the fuck it’s done. Another close friend of mine, Carole Montgomery, is in Los Angeles right now touring her stand-up show, “Women Of A Certain Age,” which is incredibly funny so if you get the chance, go see it! I just got to meet and work with Taylor Tomlinson for the first time who is fucking hysterical. Then there’s my friends Joanne Filan, Ryan Metzger, Vinnie Nardiello, Ty Raney, Jess Alaimo – who are all great comics from Jersey.