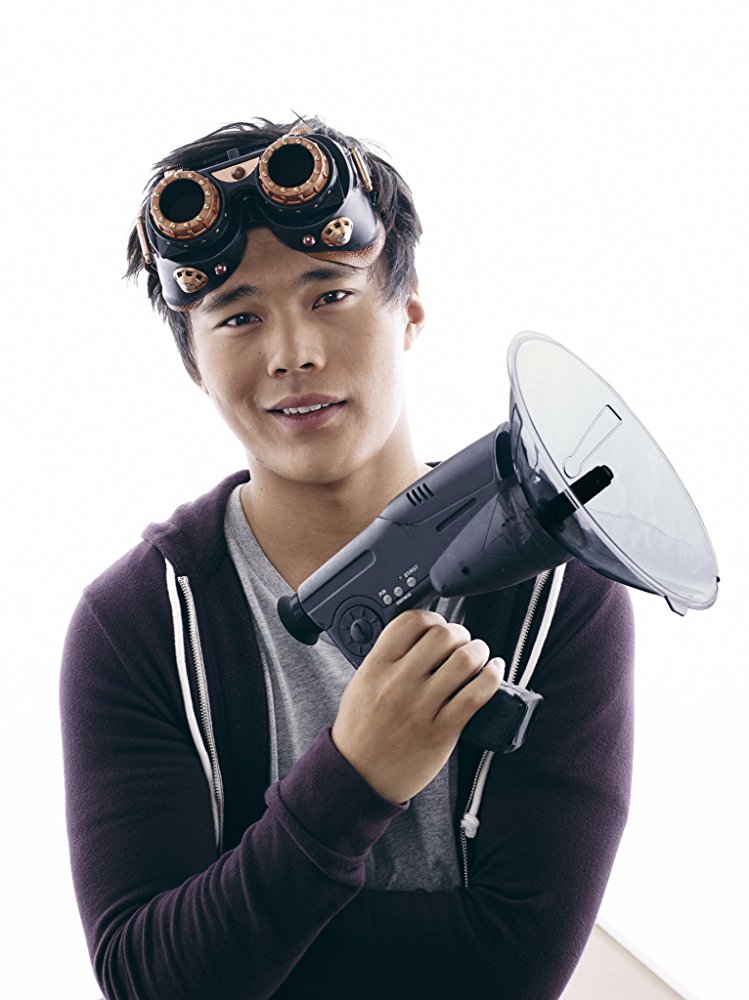 Nobody ever said that saving the world week after week would be easy, but for fans of “The Librarians,” it’s at least guaranteed to be entertaining.

Now entering its fourth season, the fantastical adventure series that spun off from the successful TNT movie franchise of the same name, is returning for more anything-and-everything-can-happen storytelling. Focusing on the high stakes exploits of an ancient organization of librarians tasked with protecting the planet, the new season promises to deliver on the kinds of fun twists and turns that fans of the series have come to expect.

We recently sat down with star John Harlan Kim, who plays Ezekiel Jones, to discuss how the limitless storytelling potential of the series impacts his performance, why a horror-themed episode was one of his favorites, and whether or not he could see himself playing a librarian for another 10 seasons.

TrunkSpace: One of the things that surprised us was just how young you are in real life. From an outside perspective, Ezekiel seems like a really complex, multilayered character, which seems like a gift to get to play at your age.
Kim: That’s the cool thing about Ezekiel, is he is complex. I get to delve into the lens of what essentially makes him up as a character. I think we have such an amazing writers team to essentially put together these characters that all have their special skills, and talents, and what makes them ultimately, at the end of the day, qualified librarians. But also, they all come with their own set of problems and flaws. That’s what really humanizes them. So that’s what I love about the show, is that you find these almost everyday people that are in jobs like the pipelines with Stone. Or working at a hospital with Cassandra. But then there’s more than meets the eye – their vocation barely uncovers who they really are.

Now that we’ve been shooting for three years, it’s sort of like they’re finally understanding what the job entails. They’re getting 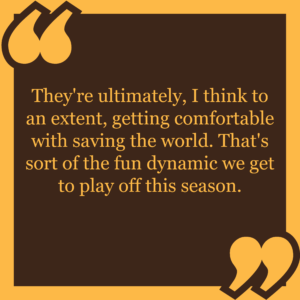 very good at it. They’re ultimately, I think to an extent, getting comfortable with saving the world. That’s sort of the fun dynamic we get to play off this season. I’ve never been to a fourth season of a show. Obviously, as you mentioned, I’m still quite relatively young. I think I’m just excited to see how it plays out from here. We’ve had the audience stick by us so faithfully, and they’re some of the best fans going around at the moment. I’m just excited to ultimately see what they think of this season, because now we’re playing off established knowledge, and established characters, and those dynamics. They play out a little differently to how you would expect.

TrunkSpace: You mentioned the writers. Is this the kind of show where, as an actor, it’s a bit impossible to guess where the writers are going to take your character because of the limitless potential of the stories themselves?
Kim: That’s a good question. Yeah, I mean there are no boundaries in “The Librarians” world. It’s a magical world, where literally anything can happen. That’s sort of the cool thing about it, is every episode that we deal with almost feels like we delve into a little bit of a different genre. We can have the Minotaur in a bit of an action or thriller episode. We can have a bit of a romantic comedy element playing out. We can have a bit of horror in certain episodes. So that’s what’s cool about being on the show, is it knows no bounds, and we’re essentially, all as actors, just on it for the ride. These writers do such a fantastic job of intellectually, and accurately obtaining information, and translating that into a script that’s both compelling and entertaining, but also quite informative as well.

TrunkSpace: When you look at Ezekiel’s personal journey thus far, what has surprised you the most in terms of where he started to where he’s been?
Kim: Well, the cool thing is, I don’t think they pictured casting somebody like me. I mean that in the way of, as you mentioned, I’m quite young. I think the whole dynamic of Ezekiel being this troubled, trickster younger brother, sort of came, I think ultimately, with my casting. I think they wrote around the fact that I was quite young, and that I would’ve actually received my letter from the library, if I had received it 10 years ago, even younger. That all sort of came out as we got to play with more scenes, and really step into the shoes of these characters.

Now ultimately, I take up the role of annoying little brother with pride, but it was sort of fun to see why he is that way. What is his arrogance? Is it real arrogance, or is it fake arrogance? Is he acting cool because he’s hurt? Is he acting cool because he truly believes he’s cool? That’s sort of what I had fun with. I had my book, where I’d essentially write notes on what I felt about the scene – what he was potentially hiding, and what he wasn’t. That’s what I had so much fun with, seeing some of that come across on the screen.

TrunkSpace: As you stated, you’re getting to play in all of these various subgenres week to week. Does that allow you to approach performance differently from episode to episode, depending on the tone of a given script?
Kim: Yeah. One of my favorite scripts was the horror house episode in the first season. It was funny, just to have Ezekiel present, almost like the audience’s voice. He essentially would contradict the actions of the characters, saying out loud what the audience at home would probably be thinking. “You don’t do this in a horror movie. You don’t do that.” That was sort of a fun little dynamic to play with.

I think that’s what’s cool about the show – it gives us a chance to jump into either an emotional scene, or a funny scene, and sort of allows us the freedom to see what the characters would do in those particular situations. That’s what I think ultimately makes them real people. The writers do such a good job of providing, almost, the audience commentary within our dialogue. That’s what I think makes it clever and fun.

TrunkSpace: It sounds rewarding to be getting to play in this sandbox as an actor, but on the inside, 10-year-old you must also be doing cartwheels getting to go up against things like, as you previously mentioned, a Minotaur.
Kim: (Laughter) Yeah. I remember at some point, at the end of Season 2, “And the Point of Salvation,” where I’m getting to play opposite Christian Kane and Lindy Booth, and then Rebecca drops an amazing monologue. And then the next thing you know, we’re running from zombies. (Laughter) So that’s sort of the fun aspect of this show, is like you said, that absolutely anything is possible… and don’t we know it!

TrunkSpace: You’re about to kick off your fourth season of “The Librarians.” What has been the most enjoyable part about getting to play the same character for such an extended period of time?
Kim: I’ve gotten to try and experiment with different things, and see what the audience responds to, and what they don’t respond to. Now we’ve definitely, all of us, worked out almost all the kinks. Now we’re at a point where we’ve been in the skin of these characters for so long, we understand them almost as well, if not better than anybody else. So as far as our ideas that we bring to the table, they’re definitely a lot more in line with what everybody else is thinking at the time. So that’s sort of the cool thing, is coming into Season 4, knowing what we do, and knowing that we do it well – ultimately seeing how far we can take these amazing characters.

TrunkSpace: So if you were in a position where you could be playing Ezekiel for 10 more seasons, is that something you’d be excited about… getting to play a character for that long?
Kim: To get to work with these people for that long would be a blessing. I think as far as being on a show for that long, it’s essentially up to the efforts of the creative team and the actors themselves, to keep it fresh, and interesting. I would absolutely be up for that challenge. What’s so great about it is we have such short seasons that I’d also love to squeeze in little projects in between, both of my own, and others. But yeah, ultimately, at the end of the day, Ezekiel is such a fun character to play. For as long as they’ll have me around, I’d be happy to step into his shoes.

Season 4 of “The Librarians” kicks off Wednesday on TNT with a two-episode premiere beginning at 8 PM ET/PT!