With the new drama “Somewhere Between” set to premiere tonight on ABC, series star Noel Johansen is prepared for how viewers will respond, good or bad, to his portrayal of Danny, a young father navigating life with deletion syndrome. Deletion syndrome, also known as DiGeorge syndrome, is a disorder that affects both the mind and the body with symptoms ranging from developmental delay to congenital heart problems.

We recently sat down with Johansen to discuss if he had reservations taking on the role, how he fully inhabited Danny even when the cameras weren’t rolling, and why the “Supernatural” fandom can’t forget about that one time he was beheaded.

TrunkSpace: In “Somewhere Between” you play a mentally challenged character named Danny. How did you approach the role?
Johansen: In terms of preparation, the audition process was pretty rigorous, but I felt like he had kind of inhabited me as soon as I read the sides. Initially, once I got the sides for the audition, my immediate reaction was, “I’m not sure I can play this role,” because I hadn’t done something like that before. But as soon as I read him, he kind of inhabited me. I did some research online and I got a feel of physically what he was like and what degree of disability he may or may not have. To be honest, in a strange way, and I haven’t had this happen to me too many times as an actor, but I felt like he really tapped into something. It was really an emotional thing. That helped me navigate everything else about his character. As soon as I went into the audition and as soon as I got on set, he was strongly in me.

So I worked on my own initially with the audition and my first couple of scenes and then I worked with my costar, Imogen, who plays the role of my daughter, Ruby. We worked together with an acting coach who was pretty familiar with Danny’s disability. In that, we kind of came up with some things that were consistent with us, because it is a hereditary disease.

TrunkSpace: In this day and social media age, everyone has an opinion. Did any part of you worry about taking on a character 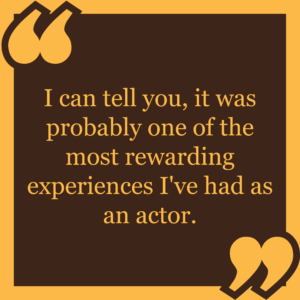 with a disability, knowing that people will dissect it and your choices online?
Johansen: I understand that and I respect that. Lots of folks face this when playing characters with disabilities. Deletion syndrome… there’s varying degrees of it. It affects people quite severely and then quite minimally, to the point almost imperceptibly. The level that we chose, I felt, was consistent with his storyline and his ability to have a daughter and to communicate and to make the decisions that he makes in the series. And he has an emotional life that was quite accessible. Unlike folks with autism, those with deletion syndrome have a lot of emotional access and, probably, vulnerability as a result. That’s what Danny really had. He has a lot of emotional vulnerability.

I did a lot of research on it and I hope people will be constructively critical, but I understand if they feel like there’s something missing. It might be somebody with a disability that might point to that and I understand that.

TrunkSpace: The concept of “Somewhere Between” is pretty heavy. Does the material itself, episode to episode, echo that same sort of heaviness?
Johansen: Yes, even in Danny. Danny takes on a lot. There’s a lot going on for him. Often he’s put in an emotional crisis. Danny’s one of the major emotional outlets in that way because he’s vulnerable.

TrunkSpace: When you’re playing in such an emotionally heavy sandbox, can you leave that on set or does it come home with you?
Johansen: That’s a great question. I’ve done some really heavy stuff in my time, especially in theater. I’ve done Neil LaBute’s plays. I’ve played, “In a Dark Dark House,” a character who was a pedophile. I’ve played some heavy characters who have a lot of drama. I guess in that way, I’m an emotional veteran. Fortunately, with Danny, I was able to leave him on set, but as soon as I got to set… as soon as I got to my trailer… he kind of took over. And I wasn’t trying to be at all coming from a place of ego. I explained it to folks who were trying to talk to me on set sometimes that this character was very vulnerable and I kind of just needed to stay in him. There were 10 hour days where I was deeply in him and I never really went out. I don’t really ever go out of him when I’m on set.

TrunkSpace: And at 10 hours, that’s most of your conscious day.
Johansen: It is.

TrunkSpace: You’re spending more time with Danny than yourself on those days.
Johansen: Absolutely. Yeah, I mean even on a lunch break, I was pretty quiet and kept to myself. As a person, I’m fairly gregarious, but I think that in this part, I respected where Danny was and I kept him close. I’m here to serve the character and the story. I can tell you, there were some exhausting days, but it’s a very rewarding exhausting. Not exhausting like, “Wow, I regret that.” More exhausting like, “Wow, I ran an Olympic marathon and I didn’t think I could do it.”

TrunkSpace: When you’re able to accomplish something that you didn’t think you could pull off, that makes it all the more rewarding, right?
Johansen: Yeah. Exactly. I can tell you, it was probably one of the most rewarding experiences I’ve had as an actor. On the last day of the last scene, it was very, very touching what people had to say. I was extremely emotional after the last shot. Yeah… it was hard to let him go in a way.

TrunkSpace: On the opposite side of things, you’re also going to be appearing in “Loudermilk” from the mind of Peter Farrelly. From a performance standpoint, is there pressure working on a comedy for the guy who is responsible for classics like “There’s Something About Mary” and “Dumb and Dumber?”
Johansen: I was slightly intimidated, although for me, I grew up in an acting family with my mom. I fortunately never really got too sussed by fame and all that stuff. For me, it’s really about the work and it’s really about telling the story. In that way, it helped me. But yeah, it was intimidating.

TrunkSpace: We have an unnatural love for “Supernatural” here at TrunkSpace and we know that you appeared in two episodes as two different characters. That’s a show that has such a massive fandom. Have you been approached by fans for the work that you did on the series?
Johansen: Not online, but I’ve met folks on the street who have said, “Oh yeah, you were that…” because I was in one of the earlier episodes where I played a sheriff and then later on as a vampire. People are like, “Yeah, you were that vampire who got his head chopped off!” (Laughter)