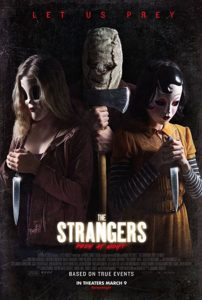 Chilling Out is where TrunkSpace talks all things horror and genre with those who work in the projects that give us the thrills and chills to keep coming back for more. This time out we’re chatting with Johannes Roberts, director of “The Strangers: Prey at Night,” the long-anticipated sequel to the 2008 surprise horror hit. Starring Christina Hendricks, Bailee Madison and Martin Henderson, the frightening follow-up tells the story of a family stalked by a trio of masked strangers, seemingly without any real motivation at all… other than a genuine joy for murder.

We recently sat down with Roberts to discuss how his vision for the film sprung from the first, the importance of pacing in “The Strangers” universe, and why he was nervous about some of the creative choices he made with “Prey at Night.”

TrunkSpace: When you’re preparing to helm a sequel to a movie like “The Strangers,” what’s your visual approach? We would have to imagine that you want to bring your own vision to the film while also looking to carry the established look and feel of the original?
Roberts: Yeah, it’s a tricky one, to be honest. I think initially we started quite faithfully to the world. When I first started I was like, “Okay, let’s approach this as a sequel.” And then it sort of grew into something… into its own beast. But there’s a lot that’s very faithful to Brian’s movie, the costumes and the sort of world it’s set in.

I’ve been wanting to do a movie like this for a long time where you get to use the zoom lenses and the split diopters and to really go, properly, sort of retro and with the fog machines rolling all the time and that kind of thing. So, yeah, it just sort of became it’s own thing. I’m just such a huge John Carpenter fan that I saw this as my chance to make the John Carpenter movie that he never made. It was “Christine.” It’s “The Fog.” I had fun with that side of things.

TrunkSpace: You mentioned the world, and it’s a world where pacing is so important in terms
of just how to structure the fear.
Roberts: Yes, absolutely.

TrunkSpace: That similar pacing of the original is something that carries over into your film, that sort slow burn. 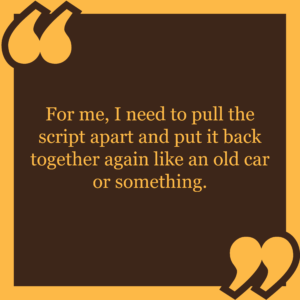 Roberts: Yes, so much. I think Brian’s a super talented writer and I am a big fan of the first (film) in the way that you have this couple going through an emotional breakdown, and then so everything comes from that. To be honest, it’s not about the strangers, it’s about them and their relationship, and the strangers are almost… they sort of come out of it. They always signify this couple’s problems and they sort of become real life. We really sort of played with that in this one.

And then, yeah, the pacing is a huge… it’s the most fun thing I think about these movies like “The Strangers” and this one, “Prey At Night,” is you get to be really slow – like you have a real sense of dread building. And then when it goes, it just goes. Eventually it goes mental. So, yeah, it was a fun one.

TrunkSpace: From what we could tell, you’ve had a hand in writing nearly every project that you’ve directed. Does it make directing a different experience when you’re not also serving as the screenwriter on a particular project?
Roberts: Yes, it does. As a writer, as a director, you come on and you really shape the material. I think any good director, whether you’ve written yourself or whether you haven’t, you take the blueprint of the script and then you make it your own and you restructure it for the world that you want to make. So I get very involved in that side anyhow. When you haven’t created the characters yourself, it’s actually quite a freeing experience, I find. You approach things in a very different way. Sometimes it’s actually a much more visual way because that’s where you’re coming from. You’re not coming from the emotional world of the characters that you’ve built up. The film has a real style and look that was actually quite freeing that, maybe, I wouldn’t have been brave enough to do if I had written this and created it myself.

TrunkSpace: Does not having an emotional, creator-based attachment to characters make it easier for you to adjust and make changes to them on the fly, should it be revealed that a particular story or character element isn’t working as planned?
Roberts: I’m pretty good regardless. I would have spent, with “The Strangers,” three months. I would’ve worked and reworked that script over, and over, and over again. It’s not like you just go out with the material that you get and you’re just sort of out there doing it. Different directors work different ways. I think a lot of directors work purely on storyboards, for instance. They’ll sort of storyboard over and over again. For me, I need to pull the script apart and put it back together again like an old car or something. And I just need to do that over and over again, just pulling it apart, putting it back together, changing, moving. Sometimes it’s just a question of, “That scene needs to be joined with that scene,” or, “That scene shouldn’t be there, it should be there.” So I like to edit the movie before making it, to have made every scene feel shootable.

TrunkSpace: You mentioned being such a fan of John Carpenter and getting to make your version of “The Fog.” Did you try any new techniques or approaches to directing with this film that you hadn’t done in the past?
Roberts: I mean, very much in terms of cinematically, with the camera work. This is my 11th movie. I’ve come up from making sort of tiny B movies and I’ve always wanted to use the techniques that I used on this, but I’ve never been brave enough because they’re just not very fashionable. And I was really worried even though there is this kind of ’80s nostalgia going on, I just didn’t know if an audience would respond to the techniques that I was using with the zoom lenses and the split diopters.

I’m not a surgeon saving lives, but it was a brave movie for me with the way I shot it.

TrunkSpace: What was it like putting those choices to the test? Did you sit in on any early screenings and see in real time how the audience was able to react to them?
Roberts: Yeah. When we finished that movie and screened it, I was like, “How are people going to take this?” And we tested it. At the test screening… I don’t think anybody really knew how people would respond. And they just responded well, so it was like, “Okay, that’s done, fine.” (Laughter) But yeah, that could have gone horribly. As is always the way when you take a risk – you take a risk.

“The Strangers: Prey at Night” stalks its way into theaters this Friday.