Not everyone can say that they’ve stood face to faces with a boulder made of hungry aliens, but then again not everyone is Jocelyn Panton, the talented actress who can currently be seen dishing out an intergalactic smack down in Season 1 of “Critters: A New Binge,” currently available on Shudder.

We recently sat down with Panton to discuss camping out in the campy, joining the “Critters” club, and the key to not getting lost in the chaos of a career in the entertainment industry.

TrunkSpace: We’re pop culture fanatics who grew up in the ‘80s so we have to start with the obvious. As far as life moments go, where does standing next to a giant boulder of Critters rank, because if it was us, it would be pretty high?
Panton: Ohh it’s pretty high up there. Standing right next to that furry ball of death goes down in the books for me as one of life’s epic moments.

TrunkSpace: The “Critters” franchise has always been campy on purpose, and “Critters: A New Binge” certainly plays up that fun for the audience. That had us thinking… does that heightened sense of reality make it fun for the performers as well? Are you able to arrive to work each day and say, “Well, today’s the scene with the boulder made of monsters… AWESOME!”?
Panton: For sure! It made every day all about having as much fun as possible. If you’re being campy, you get to be silly and just play around. 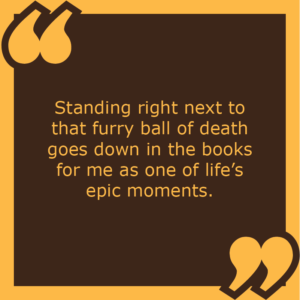 It also makes for some great bonding experiences and on-set camaraderie. Watching that boulder be rolled out and the crazy makeup and guts, we were all like, “Woah, that’s so cool.” And it was super fun to be able to sneak a photo with it on my last day because I knew I would be holding onto that photo forever. We were also constantly getting surprised by the fun and crazy ideas being presented by the different departments on each day.

TrunkSpace: What was the biggest highlight for you in shooting “Critters: A New Binge?” What will you take with you through the rest of your career/life?
Panton: My biggest highlight was probably the scene where I got to (spoiler alert!) shoot a whole lot of them and kind of help save the day, but I felt it was still pretty badass in Ellen’s sort of innocent, kind of adorable way. That and the hairy balls scene. Getting to have lines like that was hilarious and fun. What I’ll take with me for the rest of my life, for sure the memories and the awesome reminder that I got to be involved in something so awesome.

TrunkSpace: As a genre, horror always has a bit of a built-in audience. Fans of the genre will tune in to see a film or series even if they don’t know that much about it, but with a project like “Critters: A New Binge” there’s also an established brand attached to it. As a performer, is that exciting knowing that you’re going to have an audience – regardless of how big – when it is eventually released?
Panton: Yes, I feel lucky to be a part of it. In a way, I feel like I’m being welcomed into a club of sorts that has existed for a long time, which adds to the excitement and wow factor for me where I’m like, “I get to be on this awesome franchise called ‘Critters?!’” There have been so many moments along the way where I’ve stepped back with excitement and had those kinds of thoughts. I still do.

TrunkSpace: You’ve also worked on Hallmark Channel projects, which in a way, has a similar fan base to the horror genre in that people will tune in because they know they’re going to see the kind of storytelling that they enjoy. As an actress, are you finding that more and more projects you’re auditioning for are focusing on a particular audience as opposed to trying to appeal to everybody? Is there a change happening even at the network level?
Panton: I would say yes for the most part and especially here in Vancouver where I am based. We have “Supernatural,” which has the exact kind of audience you describe and then we have lots of the superhero shows like “The Flash” and “Supergirl.” And then every now and then there are shows/movies that you really don’t know what to expect, that does something new and doesn’t really fit into a particular mold per se. But then again, I guess that is kind of a genre in and of itself that appeals to a certain audience. I think networks are realizing there’s a market for everything and to be more specific makes things even more interesting. It’s kind of like staying true to who you are and with that brings more passion to the work and people can feel it. That’s why I think there are so many amazing TV shows getting released these days. 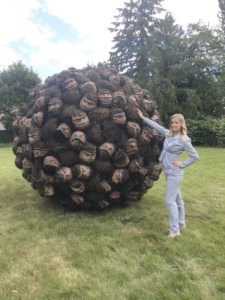 TrunkSpace: As you mentioned, you’re based in Vancouver. How important are networks like The CW and Hallmark Channel, both of which do a lot of filming there, to the talent who call the city home? Could it still thrive if those productions moved elsewhere?
Panton: Oh, sooo important. There are so many of my friends who rely on those shows for their bread and butter – and even me! In the last year, most of my gigs have been for The CW, Lifetime and Hallmark, so it would definitely be different and a lot harder if they weren’t here. They allow us all to pursue our passion. I have no idea what would happen if those productions moved elsewhere. I cross my fingers that it would never happen, but it’s always important to be working so hard, always improving your craft no matter how successful you get, so you can eventually get work outside of this city and are never dependent on things staying the way they are because we all know that things change and all things come to an end at some point or another.

TrunkSpace: At what point did you realize that acting wasn’t just a passion but a career path, and did you have to convince yourself to take the leap to commit to it 100 percent?
Panton: All my life I loved acting, from the moment I realized it was a passion of mine when I saw a musical as a kid – I just felt like something reached inside me. My dad was an entrepreneur growing up and told us to pursue our passions in life, but I think because we lived an hour outside of the city it still seemed a bit far-fetched to pursue it. After high school, I did broadcasting school which moved me to the big city and because I was doing that, which is still a bit more ‘out there’ than a lot of paths many people pursue, it made me feel one step closer to acting and that’s when I realized I can make it work and figured out how to get my foot into the industry. It didn’t take a lot of convincing, more just for a brief time when I worked at a bank I realized I wasn’t happy and I knew I couldn’t carry on doing something I wasn’t happy doing for the rest of my life.

TrunkSpace: There’s a lot of uncertainty that comes along with a career in the arts. What have you found to be your rock in terms of staying focused and on your path throughout the course of your career?
Panton: So many things. Having a support system is huge and I’m so lucky to have that with family. Not everyone gets that, but it helps even just being involved in the community – even if it’s taking acting classes and getting tight with everyone there. Also having other things that I love to pursue on the side, like planning trips or taking up another hobby. It forms you as an actor but is sometimes a distraction because it can get hard. Another thing that can help to stay really grounded is to be constantly reminding myself that, like anything, it takes a lot of hard work and to be really strongly skilled and to constantly be asking myself what is the next thing I need to do to improve myself.

TrunkSpace: What has been the highlight of your career thus far?
Panton: I would say playing Marilyn Monroe on “DC’s Legends of Tomorrow.”

TrunkSpace: Time machine question. If you could jump ahead 10 years and get a glimpse of what your career looks like a decade from now, would you take that journey? If not, why?
Panton: No, I don’t think I’d want to take a glimpse of it. In this day and age when it’s so hard to be present with what we’re doing, I think it would make it even harder to focus on what’s in front of me without thinking about the successes or worries that await me in my future. I also think there are so many life lessons along the way that lead us to where we end up. It makes the reward in the end so much more valuable and cherished. I think I would value where my life is much more if I really understood the hard work it took for me to get there. If I knew where I was going to be, I think it would be much harder to absorb everything from each moment that I have to learn.

“Critters: A New Binge” is currently available on Shudder.