Combining the collective comedic tones of ‘80s sex comedies with the teen-geared appeal of the “American Pie” films, “Blockers” is ready to flip raunchy comedy on its head and lay the foundation for the laugh-inducing cinematic trends to come. Following a group of protective parents who are looking to stop their teen-aged daughters from losing their virginity on prom night, the film takes a familiar premise and tells it from a different perspective, creating something that is both recognizable and fresh at the same time.

We recently sat down with Bellinger to discuss where-the-sun-don’t-shine beer tubes, why he thinks the comedy in the film will connect with a broad audience, and the culinary wizardry of the incredible, edible egg.

TrunkSpace: This movie further establishes something that we’ve been preaching about for a while now, which is, John Cena is a funny dude.
Bellinger: Yeah, very funny.

TrunkSpace: Was it a weird experience to go to set for the first time and not see the wrestling persona, which is so larger than life?
Bellinger: Yeah. When you don’t even see them in real life, when you see them on TV, or wrestling, or whatever they’re doing, it’s always interesting to see them in person. But him, because of also the wardrobe that he’s in too – he’s in these shorts and this button down shirt – it’s very funny. But he’s still that big dude, and he’s very, honestly, he’s very professional and very polite in real life. Talking to him and stuff, he’s a very proper guy. That’s what’s funny too. He’s not throwing people around all the time. He’ll just stand there and talk to you, not a single body slam.

TrunkSpace: And he’s got one of the best qualities when it comes to comedic delivery, which this movie sort of spotlights for everybody involved, including yourself, which is to not be afraid to laugh at yourself.
Bellinger: Right. Exactly. It’s true. That’s the whole thing is that you’ve got to be willing to just… you just can’t care. You’ve just got to have fun and do the crazy thing, because at the end of the day it’s what makes it great. He was great. He did all of his stuff, and he’s a hard worker. He’ll do it all, even take a beer tube in his butt.

TrunkSpace: Comedy in general can always be so subjective, but when you’re working on a movie like this, just in terms of the general 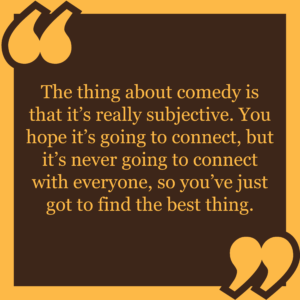 feeling, did you get the sense that it would translate to a broad audience?
Bellinger: I feel like at the end of the day, you never really know, but I sure thought just the script alone was really funny, and so just reading that gets you excited, and got me excited. But then actually going there and shooting it, working with the people, and seeing how it’s going, yeah, you can see it. There are some scenes where maybe I’m not necessarily doing as much, or they’re shooting something else while I’m there before I shoot something I’m doing and you try and get a little peek and watch what other people are doing. There’s just some really funny stuff coming out of everybody, especially the adult cast, who are so funny. Ike Barinholtz, who plays Sam’s Dad, who’s my date – Chad’s date in the movie – seeing some of the crazy stuff he was coming up with… he was so funny. And working with Leslie Mann and John as well. Just all of them. Getting to see some of the scenes that they’re in, watching them shoot, you can tell that it’s just really funny, so you definitely get excited.

TrunkSpace: You’re also a musician. Is the act of delivering jokes a bit like writing a song where when it’s working you just know it?
Bellinger: The thing about comedy is that it’s really subjective. You hope it’s going to connect, but it’s never going to connect with everyone, so you’ve just got to find the best thing. Honestly, I think I’m much better at comedy than writing any sort of song, so let’s just be honest there. Comedy, you’re trying to cater your jokes to a certain audience and stuff, but you’re never going to make everyone happy, so just come up with the funniest stuff you can.

This movie is funny. I think what’s cool about this movie too is that they have jokes for everybody, because there’s a lot of stuff in this movie that people don’t even know about, and I’m not going to spoil today. There is some really crazy, hilarious, raunchy stuff in this movie. That is a certain kind of comedy. There’s a lot of one liners, a lot of jokes like that. But then there’s also some smarter comedy too in it. And there’s subtle stuff. It’s got stuff all over the place. People are going to be laughing throughout the movie. It’s going to be different people laughing at different parts, because it’s going to hit everybody differently.

TrunkSpace: A lot of people are calling the movie an “American Pie” for a new generation. Did it sort of have that vibe for you as well, where it could be one of those comedies that sets the pace for comedies to come?
Bellinger: It definitely could. I think what’s good about this movie is that it is American Pie-ish, but we’re getting this from the woman’s perspective, from the girls, the seniors. You don’t really get to see too much of that, because there has always been a lot of that BS stigma around women. You can’t talk about women doing that stuff, which was just bull. It’s time to do that kind of thing, and so you’re getting that. But then, there’s a big adult perspective in this. There’s a lot of stuff with the parents. You’re getting to see what they’re going through, and how they’re coming to terms with if they’re okay with this or not, and trying to figure it out. I think it definitely could set the pace, because it’s just giving you a lot more perspectives in a story that you’re not normally getting. I think that’s what’s interesting, is there’s some focal points that you don’t get to see in a lot of films. The trend is happening. Eventually I think this will start, like you’re saying, start the next thing, because this is going to be the norm now. I think we’re going to get a lot more of this, and that’s the way it should be. 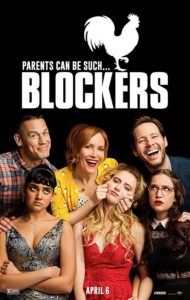 TrunkSpace: You gained a lot of attention for a Skittles commercial you starred in a couple of years ago. Was that a strange experience, being recognized as a character that really only inhabited a 15 to 30 second spot? It must have far exceeded any expectations?
Bellinger: Yeah, that really did. I will tell you, that was a surprise, because when we filmed that, which was years ago – I can’t tell you exactly, obviously there’s a date somewhere, but it’s been three or four years at least. I never thought that it would be like that. I don’t think anyone did. It’s so funny now that it’s become this thing. At the end of the day, I’m laughing, because it’s great for me. (Laughter)

TrunkSpace: (Laughter) It’s the gift that keeps on giving, right?
Bellinger: Yeah, it’s been just this amazing thing and I’m so lucky that it happened. But yeah, everyone has seen that commercial now, and it’s become this big thing. It’s constantly played during all these major sporting events – all through the NFL playoffs, all through now basketball and stuff, and it’s just constantly going and going. It’s this weird thing. I really can’t explain it. I mean, thank you Skittles for constantly showing it, and may you never shoot another commercial. (Laughter)

TrunkSpace: At this point, more people have probably seen it than “Game of Thrones.”
Bellinger: You are probably, definitely correct. It’s online. It’s playing in movie theaters. It’s playing on networks and cable. It’s been the most fascinating project I’ve ever done, that it’s lasted this long. I have to say, it was really fun for me to do, because in that commercial, I got to have a lot of fun. There was a lot of improv. We shot it so many different ways, and I did so many different things, that I had no idea what it was going to be when it came out. I had a great experience working on it.

TrunkSpace: You enjoy cooking. When you’re getting ready to slip on the apron, what’s your go-to dish?
Bellinger: My go-to dish? Well, this is kind of boring, but I love to cook eggs. I love eggs so much. Eggs are so good, and they’re so versatile. They’re in everything. Well, they can be. If I’m home, that’s what I cook.

TrunkSpace: Are you rocking eggs skillet style? Huevos rancheros? How are you cooking them up?
Bellinger: Usually my favorite thing is to do eggs, butter, and then just constantly stir them until they’re basically scrambled eggs – until they’re really nice. But they’re just super soft and delicious. Sometimes there will be nights where I’ll be out… maybe I went to a bar or something with a bunch of people, and I get home. Most people are getting weird things. I’m grabbing a pot, and grabbing eggs, and standing there for 10 minutes stirring the pot, so I can eat these eggs before I go to bed. I don’t know, that’s always my go-to, because it’s so simple. It’s really not terrible for you, you’re just getting protein and some fat. That’s why I always go towards eggs. I do love huevos rancheros though. I love Mexican food. Poached egg is good. Man, poached egg, bacon, mushrooms on toast, that’s good. Man, there’s so much stuff.

TrunkSpace: Now we’re hungry.
Bellinger: I know. Look what you did.

“Blockers” arrives in theaters on Friday.