Jill Morrison is kicking off 2019 right. With two projects reaching the masses in January – the UFO-themed series “Project Blue Book” at A&E and the recently-released sequel “Benchwarmers 2: Breaking Balls” – the British Columbia native is enjoying the contrast in tone of the two converging projects. And while delving into the real-life intrigue of the alien mystery was an enjoyable journey, “Benchwarmers” allowed her to do the thing she enjoys most… a trait she inherited from her dad… making people laugh.

We recently sat down with Morrison to discuss how being responsible with the truth feeds a performance, her opinion on life beyond the stars, and the importance of our funny bones.

TrunkSpace: You have kicked off 2019 in style with two big projects, the film “Benchwarmers 2: Breaking Balls” and “Project Blue Book” for A&E. Is seeing a series or film released just as exciting as doing the physical work or have you already emotionally moved on by the time they see the light of day?
Morrison: Filming and being on set is the best thing ever. But when the project comes out, it’s really fun. It can depend on the project and how excited I might be for that particular show. But it’s pretty wonderful to see your work come to light, and to be appreciated. Starting the year off with these two amazing contrasting projects feels pretty great. “Project Blue Book” is so complex and interesting. And “Benchwarmers” allowed me to do my favorite thing, making people laugh. So it’s really fulfilling to see that happen.

TrunkSpace: “Project Blue Book” is based on the true story of U.S. Air Force-sponsored investigations into UFO sightings that spanned decades. As an actress, does working on a project that is steeped in reality bring a different set of responsibilities in terms of performance?
Morrison: What a fantastic question. Yes it does. I think one of the most important aspects of being in a period piece is to pay attention to society at the time. A woman like Faye must have had to work very hard in the U.S. Air Force to have this position. Understanding the real Dr. Quinn helped me form the strength and intelligence his assistant would have. Being responsible with the truthful story feeds your acting. It’s fascinating. I want to be as loyal to that as possible, because I want the audience to believe I am that woman. The production is so incredible and thorough with being as truthful to reality as possible, down to the tiniest detail, that it’s impossible not to learn from that and to feel like you are in another world. On set I would feel like I was sitting in a museum sometimes. It’s beautiful the art behind this project.

TrunkSpace: What can you tell us about your character Faye and where she fits into the ongoing storyline of “Project Blue Book?”
Morrison: Faye plays the assistant to Michael Malarkey’s character Dr. Quinn at the U.S. Air Force base. One of the cool things that I loved 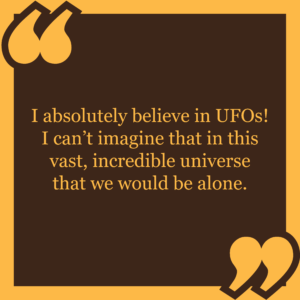 about filming was the secrecy of it. I didn’t always know what Faye knew. I got to find out as filming went along. Which was such a cool process for me as an actor. She protected secrets and was very selective with the information she released. She is allowed to be a part of a small circle of people in this, and her part is to stand guard to her boss and her country.

TrunkSpace: We’re sure this is part of the playbook when you star in a project that revolves around aliens and it would be a real swing and a miss for us not to ask, SO, do you believe in life beyond the stars? Is the truth out there?
Morrison: I absolutely believe in UFOs! I can’t imagine that in this vast, incredible universe that we would be alone. I also think there is just too much proof, especially after being so educated from working on the show. I don’t want to meet one… but I believe yes, we are not alone….

TrunkSpace: Speaking of swings and misses, “Benchwarmers 2: Breaking Balls” is a baseball comedy. Looking back on your work in the film, what moment – in terms of laughs – are you most looking forward to an audience seeing?
Morrison: I’m really excited for the montages!! (Laughter) So fun to film. Shots of us being just terrible at baseball, and then when we improve! We had a blast filming this and watching each other get up there and be fun and silly. Some of us were nervous when we had to actually be good at ball, but we had practiced so much in between takes, that we nailed it!

TrunkSpace: Do you feel more pressure when performing in a comedy given that comedy, especially nowadays, feels very viewer-specific? Is it hard to find the beats and deliver on a joke that a broad audience will be able to laugh along with?
Morrison: I guess I just figure if the kind of comedy I’m doing isn’t up one person’s alley, I know there are a lot of people who will enjoy it. I myself love broad comedy, watching it and acting in it. I really crack myself up a lot, and am mostly just having a great time being silly. Feeling very grateful that I get to do this for a living, and mostly worry about all the people who will laugh!

TrunkSpace: We’re suckers for “Supernatural” here, which is a series that you appeared in and has employed actors in and around the Vancouver area for well over a decade now. How important are shows like “Supernatural” and others that call Canada their home to the development of the talent pool in and around the city?
Morrison: I think the talent in Vancouver is pretty insanely versatile! So many talented people! The community here is very grateful for shows like “Supernatural.” We have all gotten to play so many unique kinds of roles on sci-fi shows like this. It’s our bread and butter. But, I also think they are lucky to have us! Dedicated, hard working, true actors in this town. As well as our crews. They are the bees knees!

TrunkSpace: Lots of characters have met their demise in “Supernatural” and often in memorable ways. Yours was no different. Have you had any other unfortunate on-camera endings that beat out death by photocopier?
Morrison: (Laughter) Death by copier was pretty fun! I have died in a number of ways. It’s for sure one of my favorite ways I have died! I have been shot, electrocuted, drowned, stabbed, neck broken… you name it! Though, I think I really enjoyed “Van Helsing” most. It was challenging to be shot in the head from behind and to have my body slump down. It was a lot harder than I thought it would be. It was cooool! I also enjoyed being electrocuted because I got to fall down some stairs and shake about!

TrunkSpace: What has been the highlight of your career thus far?
Morrison: The highlight of my career? Wow! Well, I’m gonna have to say working on the sitcom “Package Deal.” It was the most wonderful time of my life working with Andrew Ornstein’s creative mind. Being in a sitcom has always been my dream. I was part of such a fun one, with the most amazing funny family. I miss them all the time. It was the best – I would drive to work with the biggest grin on my face. I loved my character, Nikki. I loved the format of the four camera, the excitement of the ever-changing script and the live audience. It was a special time, and I truly hope to be able to do something like that again.

TrunkSpace: Jim Morrison. Van Morrison. Matthew Morrison. Grant Morrison. And the list goes on. What is with all of the super talented/creative Morrisons?!?!
Morrison: Ah! That’s so nice! It’s a pretty cool last name isn’t it. Well, my favorite Morrison was my dad. That dude made me laugh, and taught me all about comedy by just being him – his silly self. Where would we be without our funny bones?

“Benchwarmers 2: Breaking Balls” is available now on DVD and VOD.