It would be a large-scale violation (otherwise known as a major crime) if you didn’t tune in to catch Jessica Meraz join the cast of the long-running TNT series of the same otherwise name when it returns on Halloween night. As a young detective with a complicated past, the “Major Crimes” newbie shines as Camila Paige, seamlessly joining the ranks of her fellow detectives in the critically-acclaimed spin-off of “The Closer.”

We recently sat down with Meraz to discuss mom contract clauses, why she could instantly relate to Camila, and how her path has been less about following a plan and more about winging it.

(Oh, and it’s important to note, Jessica Meraz is our 400th feature!)

TrunkSpace: You landed the role of Camila Paige in “Major Crimes” but were unable to discuss it until the announcement was formerly made. Is it a bit comically painful to be cast in such a high profile part and not be able to discuss it right away?
Meraz: You definitely want to scream it from the roof top. You want to be like, “Ahhh!” It’s definitely excruciating to wait to let people know. You have to be careful who you tell, particularly my mother, because she can’t hold back. It’s always like, “Mom, please don’t post it,” or, “Please don’t say anything.” Then, I get a text back that says, “Already did.” I’m like, “Mom!” about everything.

TrunkSpace: (Laughter) There should be a mom clause in contracts because there’s really not much anyone can do to silence their outspoken pride in their kids.
Meraz: (Laughter) That’s true.

TrunkSpace: Often detective characters written into procedural dramas are a bit one-dimensional, but Detective Paige seems to have a lot of layers to her.
Meraz: Yeah. That’s really fun about her. She doesn’t really know how to work with a team. She’s got a lot of quirks to her and a lot of family history. So, the writers and the creator gave me a lot to work with, just jumping in. It wasn’t just like, “Oh, she’s smart and she’s good at her job.” No, it was layered. They gave me relationships with the other detectives that were already established. It was really nice to have layers to work with.

TrunkSpace: Detective Paige raised her siblings, which is a lot of pressure on somebody, especially so young. Is she somebody who handles pressure well now in her adult life and career?
Meraz: That’s a good question. I think it’s probably a case-by-case basis. When it comes to her professional life, she’s on. It’s difficult to rattle her because that is where she is. Things are kind of right or wrong and she can be prepared. But when it comes to her personal life, that is something where growing up without parents to help her – sometimes when you’re teaching, you neglect the learning. Since she was teaching and she was raising her siblings, I think a lot of the personal life challenges can rattle her.

TrunkSpace: You were raised in a big family with a lot of siblings just like Detective Paige. Were you able to connect with her through that? 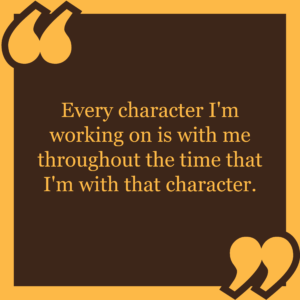 Meraz: She is very deep in my heart because I basically modeled her after my mother. She just is my mother in so many ways. My mom lost her mother when she was 14 and had to raise her little brother in Mexico. That was something that has made my mom really tough, but also at the same time, such a softy. I was very much able to relate to her on that level, just because of my mother, having that temper and maybe having some things that she didn’t learn from a mom. But at the same time, there is nothing that will stop my mother from doing what she wants. Nothing. So, it was very easy to connect with her as far as having my mom as an example.

TrunkSpace: Looking over your previous roles, we would also imagine Detective Paige was a great opportunity for you to sort of present a different side of your acting abilities, not only to an audience, but to casting directors because she seems so different than everything else you’ve played thus far?
Meraz: Very much so. It’s been really nice to kind of lead with intelligence as opposed to lead with my sexuality or with my sense of humor. To just lead from that place has been a nice change. It has really felt like a new language. The vernacular is something that I’ve never worked with.

TrunkSpace: From a performance standpoint, was there somewhere that you got to go within this season, a scene or a specific storyline, that you didn’t expect when you signed on to play her?
Meraz: Getting to work with the other actors is a really different experience for me. I’ve done a lot of comedic stuff and those actors who just fly by the seat of their pants and everything is really fast moving. So the different energy of being on something so serious, it elevates your own expectations.

Just the way I prepare for every scene and every role is so different. I had to learn that from the other actors because these words and these lines that we’re saying are really intricate and specific. I had to ask all of the other actors, “Okay, how do you prepare for something like this? How do you prepare for these interviews?” They have been so generous in helping me because I really needed the help. My entire process has completely changed for this kind of material.

TrunkSpace: You’re constantly working with new directors in television, many times on an episode-to-episode basis. Does having that fresh set of eyes each time you start shooting a new episode also encourage you to approach the process differently?
Meraz: Every director is so different, so there have been certain ones that get really involved with the actors as far as notes or what they want. A lot of them are former actors or still current actors – they kind of fit into the acting of it. Other directors are a little more focused with just the story being told from a certain perspective, so it’s been really interesting.

We have this really cool director, Anthony Hemingway. He was really specific. He really wanted me to turn everything down. That was interesting for me. I’m really curious to see that episode, to see how it translates, especially because I respect Hemingway so much. He’s a really talented person. I’m curious to see what he saw and how his little adjustments will translate on screen.

TrunkSpace: You spent 22 episodes playing Natalie in “Chasing Life.” Your journey with Detective Paige has just begun, but for you, what is the best part about exploring a character for an extended period of time?
Meraz: I think it’s something that, as actors, we’re really lucky to do – to see the world through a new perspective. Just getting to see the world through a different point of view and what would you do in that sort of circumstance. As much as you try not to let things go home with you, little pieces do. Every character I’m working on is with me throughout the time that I’m with that character. So, it’s been nice to lead my life with a little bit more rigidity and just kind of be thinking about things differently. I have noticed all of the different LAPD situations that are just going on around me in a very different way than I did before this.

They come with you. They become a part of your every day life.

TrunkSpace: You moved out to Los Angeles when you were 18. When we’re that age, we all think we have everything figured out and we have our life mapped out for us. With that said, how much of your path has gone as planned and how much of it has been having to wing it along the way?
Meraz: Well, I think I’ve been winging it the whole way. (Laughter) I had no personal connection to the industry. I didn’t have an aunt. I didn’t have a father. No one. So, coming out here was just all… I’ve learned everything though trial and error, and mainly error. So, it’s been figuring it out.

Right now, it’s pretty perfect. This was really my dream, what I’m living right now. I’ve got a lot of the scars to show for it as far as the errors along the way. It hasn’t been easy, but right now it feels pretty great.

Season 6 of “Major Crimes” kicks off October 31 on TNT.