As star of the Netflix series “Dear White People,” Nia Jervier is paving a mile wide path towards a bright and shining future. Her performance as Kelsey Phillips in the timely dramedy is a comedic coming out party for the Brooklyn native who also appeared in the film that inspired the series.

We recently sat down with Jervier to talk about her relationship with television shows, how the most popular series perfectly blend genres, and why Kelsey is a super magnified version of herself.

TrunkSpace: How has “Dear White People” changed your career thus far? Has it had an impact in terms of opening additional doors?
Jervier: It definitely has opened things up a bit more, especially with agents and casting directors who may have had interest before. I think that the show solidified my work. Work begets work, so now that “Dear White People” is buzzing, people that had interest feel justified in saying, “We really want to bring that girl in. She is great because Netflix said so.” (Laughter)

TrunkSpace: That was actually one of our questions. Is part of the buzz not only the show but the platform itself?
Jervier: Certainly. The platform does help. And it’s also a very smart show and it’s witty and it’s very stylish and sophisticated. I think that people love all of those things. It’s something very special to be a part of.

TrunkSpace: The show is all of these things… smart, witty, stylish… and they’re blended together in a way that you would not have seen on a television platform a decade or two ago. No longer is a show just one genre. In fact, it seems like shows are better served when they’re blending as many different elements as possible.
Jervier: Absolutely. I think that definitely is a new thing. I also think that it’s something that’s necessary. We’re sort of in this zone with millennials where there has to be a multifaceted aspect to it, sort of like an artistic octopus. (Laughter) That’s the only way I can describe it. It’s like Lena Dunham or the girl who created “The OA” for Netflix. She’s the creator. She’s one of the writers. She’s also starring on it. Or how Lena Dunham created “Girls” and she’s also starring on the show and producing it. Donald Glover from “Community” created “Atlanta” and he’s writing and producing it. There’s also this great British sitcom on Netflix called “Chewing Gum” and it’s the same thing where Michaela Cole is just doing everything. I think that we’re just in a time where that’s okay when it’s executed with excellence and it’s something that is revered by audiences and by your peers as an artist. I think that is being reflected in the work because if someone believes that they can be the producer and the creator and star in the show, then they will also have a similar belief in the fact that the show can be many things at one time.

TrunkSpace: So as you look forward in your career, is that something you’re interested in doing as well?
Jervier: I would love to develop and create as a creator/producer. I’m not much of a writer and I believe you should lead out with what you’re excellent at. I was just brought up that way. So I would probably partner with someone who is a close friend or a writer that I respect to carry out that writing aspect of it, but I definitely have some ideas up my sleeve. I think that it’s important to create your own content, especially as a woman.

TrunkSpace: And it does seem like that it in this day and age, wearing multiple hats on a project and creating content enables actors and actresses to fully monetize their involvement in a 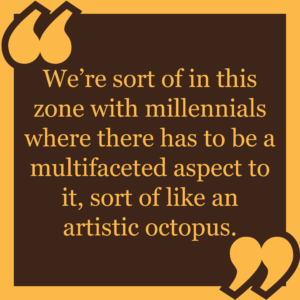 project.
Jervier: I think the actors matter in a different way now and I think that your opinion as an artist or as a producer matters because there’s proof in the pudding that the method of applying it to the work… it works! It just does.

But I must also emphasize that I definitely believe that people should stick to things that they’re excellent in doing. If you marry it with excellence and you follow through with that and know that it’s actually good, that’s when the magic happens and it works.

TrunkSpace: So as you look back over your time working on “Dear White People,” where do you feel like you got to stretch your acting muscles the most?
Jervier: I guess the last scene that closes out the show. My character Kelsey, she’s very crazy and neurotic. (Laughter) I’m a theater baby so transitioning into film and TV, it’s a different vehicle, so your work is a lot smaller and detailed because the camera comes to you. I think that I gave myself a bit of permission to tell her truthfully and allow my work to be a bit bigger than I normally would for film and TV work. Especially for film work… it’s even smaller than TV stuff.

I was really happy about the fact that I leaned in and allowed her to go there… allowed myself to go there FOR her… because I think the part really called for it.

TrunkSpace: So did finding who Kelsey was come easy to you?
Jervier: I read the sides for the audition and had to do a double take. I was sort of like, “This could not have been more perfectly written for me. I need to have this part.” I desperately wanted it and fell in love with her immediately. I understand who this girl is. She is an amplified version of myself in certain ways. Definitely super magnified. She’s many levels above. If I’m at a two, Kelsey is at like a 59 out of 10! (Laughter) But I definitely identify with so many aspects and layers of her life and I just turned everything up a notch and sprinkled cayenne on it. (Laughter)

TrunkSpace: Did it kind of feel like “Dear White People” was more of a movie than a television show in how it was rolled out?
Jervier: That’s a really good question. I guess it did. I am an avid binge watcher. I have relationships with shows. (Laughter) And I feel like I know the characters. Before the binging culture began, I don’t think that I had the same relationship with TV. It was a little different. I loved it, but it’s a big difference and getting to be a part of that with a show that I was on, there was something very special and unique about that. I guess it did feel like a film.

There was a little bit more of an excitement attached to it because you knew that you could get it all in one fell swoop. You got to get a taste of the beginning and the end in one dose. Yeah, I enjoyed that.

TrunkSpace: And in a social media age, it must make for a different type of fan interaction when they can just gulp it down all in one evening.
Jervier: Yes. I think there is a gift in that as well. People took to Twitter and to Instagram and to social media immediately. Because of the binge culture, they fall in love with the characters. And not only fall in love with the characters, they KNOW these people in the same way that I do when I’m part of the audience or I’m the viewer. I really enjoyed that part of it. I enjoyed knowing that people would get all of this show at one time. I think it gives the show more of a chance to live and for people to have a relationship with the show and the characters because you’re getting it all at one time. Sometimes I think that some shows might have a disadvantage in people maybe not having enough time this week to catch it or from missing it. There’s more of a chance of someone falling off the wagon. (Laughter)

TrunkSpace: It’s true. We’re guilty as changed for putting stuff on the DVR and then never getting to it, and yet, if you start something on Netflix or another streaming platform, you just plow through it.
Jervier: Yes! It’s addictive. And there’s a commitment. You’re like, “I’m five episodes in… I’ve got to find out!” You’re already stuck. There’s a commitment and an addiction to it. It’s a commitment that’s fun and enjoyable and it’s an addiction that’s legal and people will still like you after! (Laughter) It’s perfect!