With her character Ivory set to see more action in “Van Helsing” when Season 3 premieres October 5 on Syfy, Jennifer Cheon is living out her Linda Hamilton dream. As a child, “Terminator 2” kick-started her desire to go full on-screen badass, and now thanks to the fan-favorite fantasy series starring Kelly Overton as Vanessa Van Helsing, that dream has become a reality.

We recently sat down with Cheon to discuss how viewers will get to see more of Ivory in Season 3, the reason actors are being drawn back to the city of Vancouver, and why shows like “Supernatural” and “The Flash” have been so important to her career.

TrunkSpace: What is it like being part of a series like “Van Helsing” where the fan base is so supportive? Is it almost more rewarding on a personal level than appearing in a show that pulls triple the audience but isn’t necessarily as invested in the story and cast?
Cheon: “Van Helsing” has the best fans ever! I am happy to be a part of a show that is diverse and full of good ol’ Vampire fun! It is super rewarding when people reach out and tell you they love and support, or relate to your work!

TrunkSpace: The series returns on October 5. What are you most excited about as you build up for the third season?
Cheon: I’m the most excited that people are getting what they ask for in terms of seeing more of Ivory.

TrunkSpace: What can fans expect from Ivory this season, and on a personal level, what were you looking forward to play with on-camera as it relates to the character? 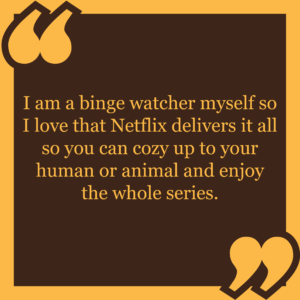 Cheon: Well, this season you see her around more characters that you may love or hate… you get to see her coming into her position more. Very exciting!

TrunkSpace: Is there a secondary level of excitement involved in being a part of a series like this when it drops in its entirety on Netflix? Is it nice to know that new people can continuously discover your work?
Cheon: YES! Yes! I am a binge watcher myself so I love that Netflix delivers it all so you can cozy up to your human or animal and enjoy the whole series.

TrunkSpace: You’re no stranger to fan-favorite series. You’ve appeared in “Arrow,” “The Flash,” and “Supernatural,” all shows that are important to viewers. But those shows are also important to your native Vancouver and the actors who call the city their home. What have those series meant to your career and how it has progressed throughout the years?
Cheon: Oh man, I had some of my first real lines on camera on those shows. I got the privilege to work with industry vets; some of the best, from actors to the crew. It’s funny how much of the industry is in Vancouver now. I lived in LA for a few years and ended up moving back home because the industry was booming (still is). Every experience on set has lead me to this moment. You never know as an actor what role will stick or which role will end up being more than a one liner… you have to really choose this career for the love because you never know.

TrunkSpace: “Supernatural” in particular, which is going into Season 14, seems like a staple for performers in and around the Vancouver area. Is it a bit of a rite of passage for actors to step onto that set and become a part of the “Supernatural” universe?
Cheon: It truly is. I remember I was fresh out of high school and modeling at the time. I needed a summer job, and my modeling agent suggested Background work… I had never heard of that being a way to earn money, but I’m so glad I tried it! It taught me set etiquette, and also gave me an inside scoop to what it was I really wanted to pursue. One of the first sets I ever walked on to was “Supernatural.” I remember saying to myself, “I am going to do that – I want to work with those actors, and be on this set with an actual role.” When it finally happened it really felt like a milestone for me, and what a great group of people to work with!

TrunkSpace: What is it that you enjoy most about performing? What is the internal drive?
Cheon: I LOVE it all. I love that I get to embody different people. I get a chance to understand how they think, whether they are fiction or real. I find it helps me put things into perspective. I love giving people a sense of comfort in the characters I play… comfort in the way they relate or comfort in the escape from whatever might be happening in their own worlds. I also love how the environment on set is so collaborative creatively. In “Van Helsing,” we get to fight with swords and be complete badasses… so much fun!

TrunkSpace: We read that part of what sparked your interest in pursuing a career in film and television was “Terminator 2.” What was it about that movie in particular (and for us, we have to add that the soundtrack was pretty great as well!) that ultimately set you on this path?
Cheon: I’m humming the score right now. (Laughter) Everything about that movie and the making of that movie drew me into this industry. I love action films, and I love seeing humans do these crazy things with our bodies. I love how indestructible we become on film. With “Terminator 2,” not only was Linda Hamilton the first woman I ever saw on TV that was tougher than most men, but she was the real deal. I was such a tomboy growing up, and when I saw her it made me proud of it instead of always trying to conform to the way men tell us we should be. Also, can we talk about the costumes, and styling of that film? Ummm, epic! I think my entire wardrobe is a mix of all the characters.

TrunkSpace: In a perfect world – the BEST best case scenario – how do you see your career playing out? What bucket list items do you want to achieve?
Cheon: I want to be a Bond Girl. I have always been such a fan of those films. I would also die a very happy woman if I were to play Catwoman. I think it’s time for a mixed race female super hero. Also I would love to have more opportunities to direct.

TrunkSpace: What job have you learned the most from, the one where the things you absorbed on that particular set you still find yourself applying to your career today?
Cheon: I think I have learned these general rules from being on a set for so many years in many different departments: Stay in your lane, be respectful, say please and thank you, remember at the end of the day everyone wants to get the job done so don’t think you are the only one who matters. Just remember how lucky you are to be there, and most importantly have fun! This is entertainment!