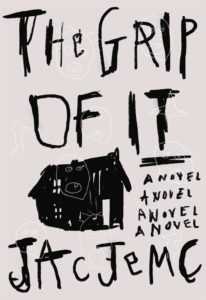 This time out we’re chatting with Jac Jemc to discuss her new novel “The Grip of It,” dissecting scares, and how she handles critical acclaim.

TrunkSpace: Looking at your body of work as a whole, it’s very diverse and you don’t seem beholden to any one genre. Is that important for you in your career, to not be perceived as a creator who is identified as a certain “type” of author.
Jemc: Every time I try to define what it is I do, it changes, so I guess it is important to me because it’s how I keep operating again and again. It’s less about how I want to be perceived and more about what I have to do to keep myself excited. I like to surprise myself when I’m writing and that involves trying out new methods and solving a new set of puzzles with each project.

TrunkSpace: In “The Grip of It” you tackle psychological horror. Is there joy in dissecting scares as opposed to just presenting them to readers? There’s something inherently chilling about knowing something is wrong but not knowing why. And then of course, the brain starts to paint its own picture of what’s lurking.
Jemc: I don’t know that I could write scares without letting the characters dissect them, so yes! The characters don’t want to trust what’s happening around them, so they look for reasons not to believe what it is they see or hear. Unless a person has a strong relationship to the paranormal, I imagine this is how most people would operate when they experience something that seems impossible. They’d have to convince themselves to believe what they saw/heard/felt, because they know everyone else will be skeptical of it, too. And how would you keep an experience like that to yourself?

TrunkSpace: When writing with the intention to creep out the reader, do you take the material out for a test drive and let people read it before presenting it to your editor (or the world)? We ask because not all scares are created equal. Some people jump from spiders. Some people scream over clowns. Is it important to see if the scares are working?
Jemc: Ah, for the scares, I trust my own instincts for the most part. The haunting in “The Grip of It” is of a pretty particular variety, and I had some tonal inspirations in mind: David Lynch and Shirley Jackson and first – or secondhand stories that friends have told me – usually pretty firmly rooted in the realm of the possible, but uncanny. I tested out a few passages at live readings in very nurturing environments – usually at artist residencies, where everything is understood to be a work in progress… and generally people seemed pretty creeped out, so I knew I was on the right track for what I was trying to accomplish. In later revisions, I have several trusted readers – my agent, editor and a couple friends – who I count on to give me an honest read, more for pacing and plot to make sure those scares are being put to good use.

TrunkSpace: Reading horror is one of the purest forms of getting an emotional reaction out of readers. Nothing is better than reading some terrifying verse that then makes you start looking over your shoulder. Do you hope that “The Grip of It” will force people to look over their shoulder and break away for an occasional mental break?
Jemc: It would be the greatest honor if “The Grip of It” forced people to squint a bit closer at what they trust and believe. My goal isn’t to make people paranoid in the long term, but I’m a person who enjoys being scared in a controlled way, and I hope the book finds an audience of like-minded people.

TrunkSpace: You have received a lot of critical acclaim for your work over the years. Does that industry attention put pressure on you to deliver in a particular way each time out? 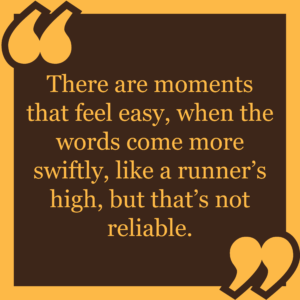 Jemc: I’ve been thinking about that with this book because it does verge into the horror genre. If readers dig through previous work or read my writing in the future, looking for something very similar, they might be disappointed that works stretch into other areas, but I don’t think I can really be concerned with that. I will try to tell the best story I can every time, and I will hope that the work finds its best audience.

TrunkSpace: You also work in the non-fiction space. How does the process differ for you from writing something like “The Grip of It?”
Jemc: My essays are always rooted in something in the real world that I have a desire to talk about, and while it might shift and grow with drafting and revision, it is still tied to that initial idea in a pretty direct way. Writing fiction, the process feels a bit blinder. I might not realize what I’m writing about until several drafts in.

TrunkSpace: How long did it take for you to discover your voice as a writer?
Jemc: I don’t really believe in “finding your voice.” I think a writer’s voice grows and forms as they make work, sure, but I can look back at stories I wrote as a kid and poems I wrote as a teen, and I can hear my voice. I see those obsessions beginning to form. It all exists together, and it’s always changing, thank goodness.

TrunkSpace: Regarding the process, is writing a labor of love for you or does it feel more like labor? Do you enjoy the process?
Jemc: It is a labor of love for sure. If you worked out the amount of money I’ve earned for my writing compared to the number of hours I’ve put in, I’d be surprised if it averaged out to more than a dollar or so an hour over the course of the past dozen years. It is hard work to be sure, and I can procrastinate which makes it feel harder. There are moments that feel easy, when the words come more swiftly, like a runner’s high, but that’s not reliable. I’ve compared writing, too, to people who say they hate running, but love the feeling of having run. Writing feels similar for me. It can be hard to sit down and do the work, but I love the feeling when the work for the day is done, even if what I got down on the page wasn’t very good. I show up every day for that feeling.

TrunkSpace: And what does that process look like? What are the ideal conditions for putting in a good day of writing?
Jemc: I wake up and make coffee and read a little bit, to warm up my brain, and then I like to write right away – a word count if I’m drafting or some other measurable goal if I’m revising. If I can write until lunchtime, that’s the ideal. Most days life intrudes and this doesn’t happen, but that’s the ideal.

TrunkSpace: Do you self-edit as you write?
Jemc: Yes, though that can vary. I usually read back over the last page or so of what I’ve written as I’m drafting, before adding words, and it’s impossible for me to read over that previous work without trying to fix it up.

TrunkSpace: Where are you the hardest on yourself as a writer?
Jemc: I always feel like I could be better at time management, like I waste too much time lazing around the internet. I wish I could write faster.

TrunkSpace: What are you working on now and what will people be able to read next?
Jemc: I’m working on a historical fiction project set in 1800s Bavaria around a king and some peripheral women in his life, and a mystery that exists between them. I have a couple stories coming out in the next few months: one in The Southwest Review and another in “Catapult Giant Book of Tiny Crimes.”

“The Grip of It: A Novel” is available now from FSG Originals.

Tags : A Different Bed Every TimeauthorfeaturedJac JemcMy Only WifeThe Grip of It