For actress Jearnest Corchado, her latest project Little America is more than just a binge-worthy series feeding the hunger of an entertainment-obsessed America. It’s a think piece.

“Little America wants us to see what we often are not able to on the news or on TV,” she says in an exclusive interview with TrunkSpace. “It hopes to portray the humanity of all of these marginalized people and to show everyone around the world that no matter how different our cultures, races or languages may be, we are all the same.”

Available now on Apple TV+, Little America is an eight episode anthology series inspired by the true stories experienced by immigrants today. In the episode “The Jaguar,” Corchado plays an undocumented teen who becomes a competitive squash player.

We recently sat down with Corchado to discuss the importance of the series in today’s social climate, connecting with her character, and why she would sign up to play a “badass” teen superhero.

TrunkSpace: Art is always at its best when it’s saying something and shining a spotlight on those subjects we need to continue discussing after we leave the theater or shut off the television. Why do you think your latest project Little America is so important given the current political and social climate in the United States?
Corchado: Little America is important now more than ever. The America we are living in now is not the America many of us want to be a part of. It is clouded by hatred and division. Immigrants and people of color are attacked on a daily basis, thousands of people are being put in cages… it is our horrible reality. Little America wants us to see what we often are not able to on the news or on TV. It hopes to portray the humanity of all of these marginalized people and to show everyone around the world that no matter how different our cultures, races or languages may be, we are all the same. We are all dreamers. We are all good people, we all have a good heart – a hopeful heart. We all just want to be happy. To be able to love and be loved. To be able to dream, and to be allowed to do so anywhere we decide to go. Because at the end of the day, no law, no paper, no document can dictate who we are, our values and our worth. Only our hearts can.

TrunkSpace: As an actress, do you feel any pressure when you’re working on a project like Little America because there is a layer to the piece that goes beyond simply entertaining the audience. Does it feel like there are bigger creative stakes involved? 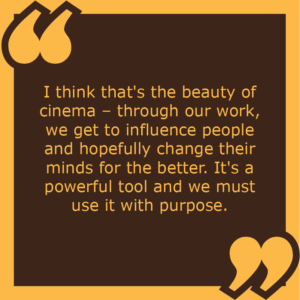 Corchado: Yes, the pressure to be as authentic and as truthful as I can be. When I am lucky enough to be offered a role in a project that goes beyond entertaining, it is always a privilege. As an actress, I always strive to be a part of something bigger than me. Projects that could potentially change lives. I think that’s the beauty of cinema – through our work, we get to influence people and hopefully change their minds for the better. It’s a powerful tool and we must use it with purpose.

TrunkSpace: We live in very politically-divided times. Did you worry how this project and your performance in it would be perceived by the general public on both sides of the aisle and how that could trickle over into your personal life, particularly as it relates to the internet/social media?
Corchado: I didn’t think of it as a political project. I saw it as a beautiful project that followed the lives of beautiful, strong and determined humans. I thought it was brilliant because it finally showed who we are in the most beautiful and authentic light I could ever think possible. There are so many stories out there still to be told… America is the land of immigrants… we were just telling American stories. The ones that we very rarely see on TV.

TrunkSpace: For fans, the final product of a film or series is always the most memorable part, but for those involved in a project, we’d imagine it goes much deeper than that. For you, what is something about your time working on Little America that you’ll carry with you through the course of your life/career?
Corchado: The truly wonderful relationships I got to cultivate with the cast and crew on Little America is something I will carry with me always. Every single person I got to work with were incredible human beings, so kind and thoughtful. From PAs to the Make-Up department that basically felt like family, to our wonderful director Aurora Guerrero – who no matter how busy our days were, was always so caring and zen. And of course, the insanely talented and kind cast, who made my job a million times easier. I was very lucky.

TrunkSpace: What was the biggest challenge you encountered in portraying – and connecting with – your character Marisol?
Corchado: Understanding where she was coming from and trying to figure out the relationship she had with everyone around her. It was a continuous discovery. And learning how to play Squash! (Laughter) I definitely had to focus and give my 100 percent in order to look like I knew what I was doing. It was very tedious and a lot of hard work but it was incredibly satisfying. Addicting too! I really fell in love with the sport.

TrunkSpace: Where are you hardest on yourself as artist and how do you overcome those self-critical insecurities?
Corchado: Probably auditions. I love the director-actor relationship, which is often missing during the audition process. I like bringing a character to life and getting feedback and taking it somewhere else. I love that continuous exploration. Sometimes auditions feel like a lot of pressure, it can be nerve-wracking… and let’s not talk about the audition waiting rooms! (Laughter) I think I’m very sensitive to energies, which is probably why I need to be 210 percent more focused once I get in the room. I am extremely critical of my work and often wonder how I did it or what I did wrong in the room or what I could’ve done better… but I learned that you just have to let it go and focus on the next (audition)… I’ve failed a million times, but I’m still here playing the game. It’s all about being persistent and being incredibly prepared. “Just do it… and then keep doing it.”

TrunkSpace: If you sat down with your 10-year-old self and gave her a glimpse of her future, would she be surprised by where her journey has taken her thus far?
Corchado: Absolutely. I think of that and it makes me tear up. I was just having a conversation with a family friend who told me that when I was 10 or so, she asked me what I wanted to be when I grow up, and I replied, “One day I’m going to be a famous actress.” I would always say “I’m going to be,” not I want, or I wish… I’d say it like it was going to happen. Like it was a done deal. I declared it without knowing or understanding the power of manifestation, which now I absolutely believe in. My journey is barely starting, but I am extremely content with where I am today. I still can’t believe it! I feel very blessed.

TrunkSpace: Blank check question! If someone came to you tomorrow and offered you an unlimited amount of money to go out and develop any kind of project you wanted for yourself, what would you greenlight and why?
Corchado: A badass teenager superhero. I think it would be awesome if younger brown girls saw themselves as superheroes on the big screen. I want younger girls to dream BIG! To see themselves as strong, self-sufficient and triumphant young women. I want them to know that they can be their own hero. That anything is possible!

TrunkSpace: What has been the highlight of your career as a whole thus far?
Corchado: I consider Little America and Cucuy The Boogeyman as my biggest accomplishments thus far. So many people have messaged me about Cucuy The Boogeyman and how cool it is to see a Latina girl as the heroine in a thriller like that. Little America is probably as, or even more, important for young girls because it’s very real, very authentic and it is based on a real-life superhero – Reyna Pacheco. It was also a big highlight because it felt like I was having my Rocky moment. (Laughter) I love doing athletic things on the job, and learning new skills… Little America was definitely a big one!

TrunkSpace: Time machine question. If you could jump ahead 10 years and get a glimpse of what your career looks like a decade from now, would you take that journey? If not, why?
Corchado: Yes. I believe that you create the life you want to live, and I hope to make the right decisions to take me where I want to go. The possibilities are endless… but I hope to work as an actress for the rest of my life. I hope I get to use my voice to change people’s lives for the better and I hope to make a difference in this world. I want to live a life with purpose… don’t we all?