Professional fighter. Professional actor. Neither are easy careers to navigate, never mind break into, but Jason William Day has never been one to back down in the face of an uphill climb. Formerly competing in the UFC octagon under the name Jason “Dooms” Day, the Alberta native made the leap into acting by way of stunt work, combining his physical talents with his passion for performance. Having worked on dozens of popular television series, including “Van Helsing,” “Supergirl,” and “Arrow,” he hit social media pay dirt when Dwayne “The Rock” Johnson shared an image of Day choking him out on the set of the upcoming film “Skyscraper.”

We recently sat down with Day to discuss his approach to changing career gears, how wrestling with The Rock lead to his phone blowing up, and why comic fans may want to keep hope alive regarding B’Wana Beast.

TrunkSpace: You’re a professional actor now. You were a professional fighter earlier in your life. As far as careers go, which one is easier to navigate?
Day: It’s kind of tricky. I think definitely my film career is just more certain in the sense that, it’s more consistent. In the fight game, you don’t know. If you went into a fight and you lose it, your career goes one direction. You win, it goes another direction. I’d say there’s a lot more unknown in the fight gig, so, this is more stable, I’d say.

TrunkSpace: That’s really interesting to hear because so often it seems that there’s a lot of factors that fall out of your control in acting and into the hands of others, such as casting directors and producers.
Day: Yeah, I guess that’s true. I think I’ve just been very fortunate and lucky so far within my career. I haven’t had an issue where I’ve gone a long time without having any work.

TrunkSpace: When you decided to pursue acting and change your focus, did you know that you wanted to utilize your physical 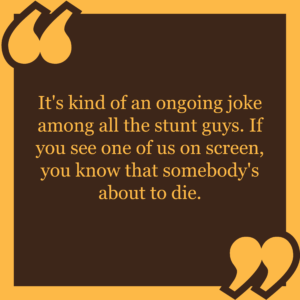 skill sets right out of the gates?
Day: Yeah. I think the transition from the fight game into the stunt world was easier for me since I spent the better part of a decade as a professional fighter. A lot of those skills transferred over to screen, which made it a fairly seamless transition. I had been training in acting long before I got into the stunt game. I was training back when I was fighting because I always had this vision that once I was done fighting, I would like to make that transition into the on-screen world. At the time, the focus was acting. It just happened that I broke into stunts first, and now the acting is starting to creep its way in there as well.

TrunkSpace: Getting started in stunts must have been a great way to get comfortable being on sets and also building those long term relationships within the industry?
Day: Yeah, 100 percent correct. It is not only time to get in front of the camera, as a stunt guy you get to learn about who’s who on set and how everything works. You get to meet producers and directors, and you make those connections. That definitely helps you out as far as getting cast in roles down the road.

TrunkSpace: We would imagine that being a stunt performer means you need to be pretty comfortable getting your butt whopped on camera or seeing your characters die over and over again?
Day: (Laughter) It’s kind of an ongoing joke among all the stunt guys. If you see one of us on screen, you know that somebody’s about to die.

But, yeah, you definitely have to swallow your pride. You don’t get to win too many fights as a stunt guy.

TrunkSpace: Does having that real world knowledge of fighting help you on set in terms of choreography as well? Are there times when something is mapped out, a fight, and you have an opportunity to step in and say, “Well, this is great, but maybe this would be more effective?”
Day: It’s funny how different the two worlds are. When you’re training for the fight game, everything’s nice and tight. You want to make your movements small and quick. When you’re on screen, you have to make everything big.

Most of the fights are pretty locked down beforehand. The amount of work that goes into building a fight before we actually step in front of the camera is extraordinary. Usually we get a couple of rehearsal days. It’s rare that you change things on the fly, but it happens. The actors always seem to want it as realistic as possible, so I’ve got to step in a few times to offer suggestions about what makes it more believable. As the case with Dwayne when we were doing the last movie, he wanted that choke to look as realistic as possible. I got to actually help him out with that. (Laughter) 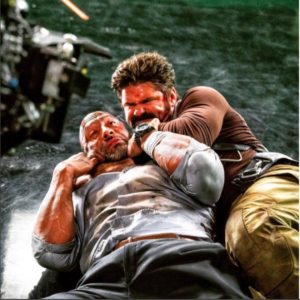 TrunkSpace: “Skyscraper” is obviously a huge, big budget film. Because of that, there’s probably plenty of days on set to get things right. But you have also done a ton of stunt performing in television as well where the schedules are more breakneck. Does that force you to change up your approach at all when there is more of a ticking clock?
Day: It doesn’t really change how we operate. It is true, in TV, usually they get the stunt guys up at the end of the day, and it’s like you have to get this huge fight sequence done in a much shorter period of time than the four hours you need to shoot it. Whereas in film, yeah, we’ve got plenty of time, so it kind of takes a little bit of the stress off.

TrunkSpace: When Dwayne posted that picture of you choking him out on the set of “Skyscraper,” did you have any idea it was going out to the world beforehand?
Day: You know, when we were doing the scene, I could tell it was an important moment for him, because he wanted it as realistic as possible. He did have Hiram (Garcia), the president of Seven Bucks Productions, snapping a few photos. I was thinking, “Wow, it would be kind of cool if he posted one of these on his Instagram,” but he didn’t really give me any heads-up or anything like that. I woke up one morning and I think I had 1,500 followers and my phone blowin’ up telling me to check Instagram. It’s just crazy the power that guy carries through to social media. It’s mind boggling.

TrunkSpace: It must have been one of those situations where you can see firsthand the power of something going viral on social media?
Day: 100 percent. That’s where society is moving, I think, especially film and television. They’re starting to cast on who’s popular on social media for some roles. It’s starting to play a huge part in the whole business.

TrunkSpace: When you look at someone like Dwayne, who got his start in the world of professional wrestling, a medium that combines acting and the physicality of fighting… was that ever an avenue you considered pursuing?
Day: No. I never really got into wrestling. I never followed it too much. I had friends that were hardcore fans, and they dressed up like Ultimate Warrior back in the day. (Laughter) And I’ve worked with a few guys – Big Show and then The Miz. The schedule and the pace they have to operate on… they’ll work for 300+ days. When they come here to shoot a movie, they’re happy that they have to be in one place for more than a week. That lifestyle never really called out to me. I like to be settled. And if I’m going to go somewhere, then I like to go for a long period of time.

If you look at Big Show, he’s got hip problems. He just got a new hip put in. Dwayne, his body’s taken some beatings over the years. So those guys put themselves through hell. It pays off for a lot of them, but, to me, it was just never appealing. I like the real fight game, and that kind of appealed to me as far as the adrenaline.

TrunkSpace: A lot of our readers are also big comic book fans. Many of those comic fans were pumped up to see B’wana Beast make an appearance in a recent episode of “Legends of Tomorrow.” You got to bring him to life, but the more important question is, will we get to see him again?
Day: That was such a crazy experience, prancing around set in a loin cloth. It was a different feeling for me. (Laughter)

I talked to the writer of that episode, and she’s producer now. I said, “Do you think you guys are gonna bring this guy back?” Anything’s possible, right?

I put the bug in her ear that I think he should come back. (Laughter)

Skyscraper is scheduled for release next summer.