Jake Stormoen grew up nose-deep in fantasy novels, daydreaming that he was a knight, sword in hand and impenetrable armor encasing his body. Now as an adult, that inner childhood narrative has become a fictional reality as he stars as the straight-laced Captain Garret Spears on the fantastical summer series “The Outpost,” airing Tuesdays on The CW.

We recently sat down with Stormoen to discuss vanquishing monsters, his D&D past, and how he learned to embrace the hustle of Hollywood, thanks in large part to the words of Dwayne Johnson.

TrunkSpace: When you’re playing in the fantasy sandbox like with “The Outpost,” does your inner child do a couple of fist pumps every time you get to put on your armor and take up a sword? It seems that a show like this would open up the door for living out some childhood dreams.
Stormoen: Either you’ve done your research, or you and I are very much alike. Maybe both? I definitely did a couple fist pumps every time I got to put the armor on and buckle up the sword belt… and then I did a couple more. My oldest childhood fantasy was to be a knight. I’d go out into the woods behind my house and vanquish monsters until the sun went down… so the role of Garret was quite literally a dream come true.

TrunkSpace: Fantasy is also a genre where anything is really possible in terms of the plot and character arcs. Does that help to keep things fresh from a performance standpoint where you never know what a day on set is going to become?
Stormoen: I would say yes and no. Once we got to set, we knew what had to be shot and how much time we had to do it, so it was fairly precise by necessity. But before the scripts for the new episodes would arrive, I think this was far more true. Though I certainly wasn’t in the writing room, I think that there were small changes made here and there when the producers and writers would come across something during filming that worked especially well, or would spark a new idea. You’re absolutely right though – fantasy is a genre where anything is, to an extent, possible so long as it abides by the rules you’ve created for your world. I’d love to think “The Outpost” does that well, and you’ll see many answers surface as to why things are the way they are in this universe.

TrunkSpace: Have you felt any pressure throughout the process, not only anchoring a new series, but doing so in one that is built to have international appeal?
Stormoen: Honestly? Yes. For sure. The audition process for me was… an adventure to say the least, and I ended up being the only American actor in the primary cast, so I felt a lot of pressure there. Garret is someone who’s very straight-laced. Someone whose word is his bond… but also someone who struggles with that sometimes. It meant that the writing would often be very straightforward for him, and it would be up to me to try and make sure the audience knows that just because he’s not necessarily saying something, th 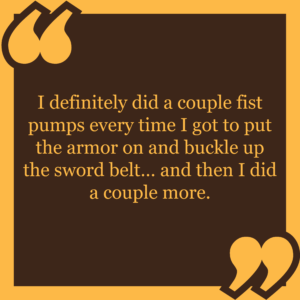 at doesn’t mean his mind isn’t racing with questions, answers, emotion and struggle. These are things that we as humans battle in ourselves universally, and I do hope that our international audience can all find something to relate to in Garret. That was the goal, at least!

TrunkSpace: Not only does the show have that international appeal, but it also has Comic Con appeal, which as we understand it, you attended this year. What were you most looking forward to as you surrounded yourself with cosplayers and the biggest pop culture fans the world has to offer?
Stormoen: I’ve been a geek my entire life. My nose was always in a fantasy novel, my friends and I would always sword fight with sticks, or play D&D, or Magic: the Gathering, or one of any number of fantasy-themed board games. So I adore this stuff. I’ve attended cons my entire adult life, and have attended SDCC in the past… but this is the first time I got to go and sit on a panel there, sign character posters for (the absolute loveliest) fans, attend events, etc. It was a whirlwind, but so much fun. I absolutely love seeing the creativity that goes into people’s cosplays, their art, their passion. Attending more cons in the future is something I’ve wanted as a career milestone for years now, and I’m finally able to start making that happen. I can’t wait!

TrunkSpace: What are you most proud of with your work thus far in “The Outpost” and your character Garret?
Stormoen: Garret is a bit of a Boy Scout, which is something I relate to a little more than I care to admit (Eagle Scout, here)! I think I understand his headspace pretty well, and he has some inner struggles that I think many of us have encountered in some form or another. My number one goal with Garret was to be just that: the guy who many of us can relate to as someone who tries to do the right thing, even when he doesn’t always have the answers in the moment. Talon is such a powerful force physically, Gwynn is such an intellectual aristocrat, and Janzo is, I think, so smart and clever he doesn’t always even realize it. That’s a lot for someone like Garret – someone who’s been on their own their entire life and has tried to completely re-write their stars – to be caught in the middle of. I’d like to think I did an alright job at portraying his character arc into the leader he’s needed as… so fingers crossed!

TrunkSpace: As far as performance is concerned, did Garret offer you something in playing him that you have yet to tackle in the past? Was there something about Garret that was fresh to you on a level that stretched beyond it being simply a new job?
Stormoen: That’s a tricky one. Garret is the necessary protagonist at the start. He doesn’t get to be as colorful or interesting as some of the other characters because he’s often an expositional driving force. This was something that presented its own unique challenges. (Which I think I alluded to above, but I have a tendency to ramble when we’re talking about Fantasy because I get so excited, so bear with me!) Sometimes I had to fight to allow him to stretch a little bit, and I think there’s definitely more of that during the second half of the season. The biggest thing about Garret to me was that the role was so personal. I really, really get this guy. I’ve been this guy. I’ve aspired to be this guy, and still do really. So he – as his own fictional character with his own history – really means a lot to me as a person. And that can be a scary thing to share with the world.

TrunkSpace: For you personally, what was the most daunting aspect of beginning your professional career as an actor? Was there anything you had to overcome before you could focus 100 percent on pursuing your dreams?
Stormoen: Oh, absolutely. I finished University at USQ in Australia (life is funny) and waited tables for about six months before getting in my car with a couple suitcases and moving to LA. I worked two jobs, took acting class, and had about $20 to $40 in my bank account at the end of each month. This is a familiar tune for most actors, I think, but still carries its own valid set of challenges. There’s a need to be able to roll with the punches, and that’s hard to do when you’re barely getting by. I think the hardest thing for me was finding that day to day rhythm and not thinking with every audition, “I need this job. I have to book this or I can’t pay the bills.” It’s just not true. You find a way. It feels true, but it isn’t. Once I allowed myself to have fun and enjoy the journey, enjoy the hustle and enjoy the effort, there was a shift. I can remember feeling so overwhelmed, and I’d just started following Dwayne Johnson on social media. He’d posted something with his infamous slogan “Hardest Worker in the Room,” and something clicked for me. I know it sounds silly to bring up a story like this, but it was a huge turning point for me mentally. All of a sudden it was possible to see results: I didn’t have to go on more auditions than everyone else. I didn’t have to earn more money than them. I didn’t have to tackle all of LA, or California, or the world. All I had to do was be willing to put in more effort than whoever was in the room with me, and that’s something I try to do, to this day. (Sorry for the long answer!)

TrunkSpace: There are more networks and streaming platforms available to viewers now than there was when you started your career, which means, there’s more content. Is it an exciting time for an actor, knowing that there are more opportunities for you out there in this vast television landscape?
Stormoen: Ohhh, that’s a tough one. Its a double-edged sword, I think. There are many more outlets for content, and much more being made… but this can also often translate to people having to cut their costs of production because platforms don’t have to pay as much for the end result – there’s a million other options happy to take that slot. It’s a weird, counter-intuitive thing that I think the industry as a whole is still adjusting to, and I consider myself extremely fortunate for somehow making this all work. I definitely don’t take it for granted.

TrunkSpace: You’ve also written and produced projects in the past. Is that something that you see yourself continuing to pursue, especially in this day and age where it seems the ability to control your own destiny has gotten easier and more affordable… thanks in large part to what we discussed previously about there being more options for distribution and content consumption?
Stormoen: I would love to produce more. I grew up and was raised with an extremely strong work ethic and the notion that when the work is put in, the results show themselves. While this still holds water, it’s not as true in my industry because as an actor, someone has to take a chance on you at the end of the day. I think producing allows just a little more control at times, which is a nice and often rare commodity in this business. Acting will forever be my first passion – I just love the idea of being able to play out the stories I escaped into while growing up. But there’s definitely an interest in being able to produce more in the future.

“The Outpost” airs Tuesdays on The CW.