Jake Busey works a lot, and when he’s not working, he’s thinking about work. That tireless desire to hear the words “ACTION” may stem from the fact that, as the son of legendary actor Gary Busey, he has seen the inner workings of the entertainment industry since he was a kid. In fact, he admits that being on a movie set is the one place he feels the most comfortable, and it’s a comfort that has lead to countless memorable performances, from the murderous Johnny Bartlett in the extremely-underrated “The Frighteners” to bug-hunting soldier Ace Levy in the cult classic “Starship Troopers.”

Busey can currently be seen in Showtime’s “Ray Donovan” and in the new horror/comedy hybrid “Dead Ant.” Season 2 of his Hulu series “Freakish” kicked off this week as well, and for those who love a vintage franchise reborn, he will be starring in Shane Black’s “The Predator,” due next summer.

We recently sat down with Busey to discuss his definition of “favorite movie,” how he refuels the mental tank, and why he’s had to be a salmon who swims extremely hard upstream.

TrunkSpace: We spoke with your “Dead Ant” director Ron Carlson recently. We have to say, that sure looked like a fun character to play.
Busey: “Dead Ant” was a hoot. We really had a good time. We really enjoyed filming that. It was quite the bonding experience for the whole gang.

TrunkSpace: An end user, the viewer, sees a film and that’s what they remember, but for actors, the experience is probably where you draw your memories from, right?
Busey: That’s very true. In fact, I wrestled with that for many years. I would have fans ask me what my favorite movie that I did was, and so I would think about trips that my wife and I took in New Zealand – my girlfriend at the time. We spent two weeks traveling in New Zealand while I was doing “The Frighteners,” then we went to Fiji for another 10 days about a month later. And then of course, the culture and the people – and so I think about “The Frighteners” in a very good way.

Then I think about “Twister,” when she got in her Jeep and drove all the way from LA because we didn’t have money 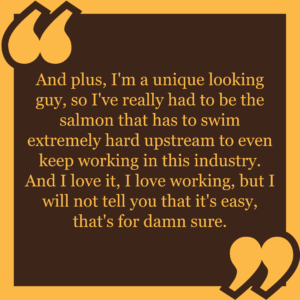 for a plane ticket, or a rental car in Oklahoma, so she drove her Jeep out during “Twister.” Then when I booked “Starship Troopers” and bought a brand new Dodge truck, she drove that out from LA to Wyoming for the whole filming. And then I put her in the film – she was a stand-in for Denise Richards. That was a real bonding experience for all the people there, and to have my girl with me was fantastic.

And for about 15 years, I was always answering people in regards to my experience of making the film. Then one day it hit me, “Oh no, they’re wanting to know what my favorite film that I did was on the screen, because that’s what they’re awareness is.” It was a big moment of revelation for me.

TrunkSpace: When looking over your filmography, which is filled with project after project, we’re struck with just how consistent it is. Are you someone who loves the work, loves to work, or a combination of both?
Busey: I think you have me at a loss there, because I don’t know the difference between loving the work and loving to work. I mean, I don’t know the difference in distinction.

For me, I love being on a film set, that’s my favorite thing. That’s where I feel most comfortable and if there was ever a place where I didn’t feel like I needed to be somewhere else, it was a film set. Sometimes you’ll be somewhere and you’ll get that feeling of some sort of sixth sense where something kicks into your brain and you go, “I feel like there’s something else I should be doing,” and then you wind up calling your loved ones or whatever, and as it turns out a friend of yours was in a car crash. Nine times out of ten, it’s just you sort of having a nagging feeling like, “I’d rather be somewhere else.” Besides from my kids, when I’m on a film set, the point is, I never have the thought, “Oh, I should be somewhere else.” I just feel completely at home.

TrunkSpace: With that said, do you feel like it’s important to refuel the mental tank between characters?
Busey: Absolutely. One of my very favorite quotes in the world was by a guy that you would never guess, from the 1960s, and he had a quote that was basically, “It’s an actor’s duty to seek out more of life than life puts at his feet.” And you have to experience a lot of things in your life, because in order to portray different characters, you need to have a wealth of experiences to draw from. Somebody who is a sheltered homebody would not make a good actor because they don’t have anything to draw from except for their own small little world.

My mind just never stops, and I never stop moving. I’ve been told it’s because I’m a Gemini, I’ve been told a variety of things, but I’m always creating something. I’m always thinking about something. I started a motorized bicycle building company. I am a pilot. I’ve now dove head first back into something I was very involved in when I was in my late teens and early 20s, which is desert racing. In fact, I’ll be racing the Baja 1000 this year, which is November 19.

TrunkSpace: Outside of film, you’ve also been working in quite a bit of great television, from “Ray Donovan” to “Freakish,” which just kicked off season 2 on Hulu. From a character driven content standpoint, how much has TV changed from when you started your career, and is it creatively more appealing to you now than it was then?
Busey: You know, there’s a lot more available now than when I started. Interestingly enough, when I was beginning, when I was coming up, and also when I was a child – I spent the 70s and the 80s on film sets with my dad. As a film actor, that was De Niro, that was Jon Voight, that was Al Pacino, that was… I don’t know, I could go on. Clint Eastwood. The list goes on and on. But TV, you didn’t want to be Ted Danson, and quite frankly at the time, neither did he. And you didn’t want to be Tom Selleck. He was so pissed off that CBS wouldn’t let him out of his contract to go do Indiana Jones, and Harrison Ford got the role, and he couldn’t do it.

Back then TV was subpar – the craft of it. Film was considered artistic and television was considered second rate. If you did TV it was just a career suicide. You wouldn’t get let back into the world of great filmmaking, with Scorsese or something. And now, everybody has a home theater system, and the internet has turned streaming into a possibility, and everything is all based on home viewing, and laptops, and we’ve got a lot of content now – you don’t even say film anymore, because it’s just considered content. It’s all shot for a tiny screen, for being on the telephone.

Nowadays, there’s only two kinds of films. There’s 100 million dollar spandex movies, and then there’s the tiny, tiny low budget independent films that may or may not get distribution. Film has kind of become a little bit of a wasteland for actors.

TrunkSpace: In a way, the two mediums have kind of flip-flopped.
Busey: Yeah. If you’re doing movies now, unless you’re one of those top 20 people that are in those spandex movies, you’re like slumming it really. No one will outwardly admit it, but if you take a meeting with somebody – a new agent, or a new manager or PR person – and you’re like, “Yeah, I’m doing a lot of independent films,” one might assume that means you’re working and that’s a good thing, but really what the other people are hearing is, “Oh, he’s slumming it in independent film land.” So yeah, you’re exactly right. You said it the best. It really has flip-flopped. Look you’ve got Meryl Streep doing television. 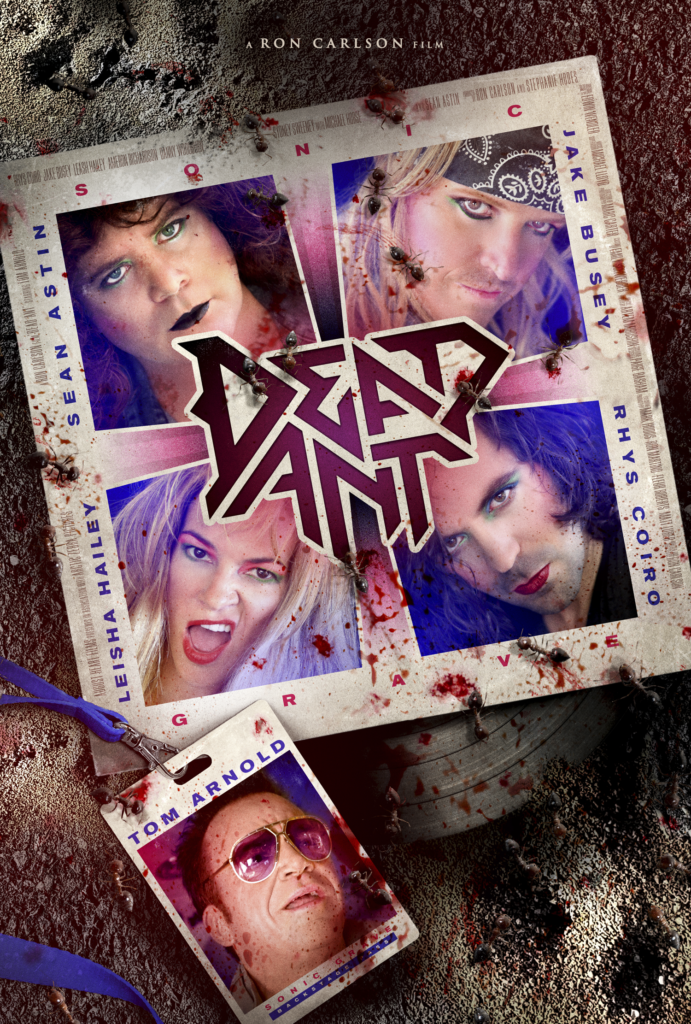 I’ll tell you what, I’ve got a lot of friends who are actors that are my age and we share in a unique thing about being Generation X-ers. There wasn’t as many of us, so we were never the popular majority. So I’ve got a lot friends, including myself, that never quite made it over the top of that multiple million dollar spandex movie for their characters, and you’re kind of caught in this lurch, by virtue.

When I was starting out in my early 20s, I couldn’t get hired. Everybody that was being hired was in the previous generation. They were all like 30 years old. It was Charlie Sheen, and Kiefer Sutherland, and Christian Slater, and those guys who were working. I was a youngster and couldn’t get hired, and then when I was in my mid 20s I really started working a lot. But then, by the time I hit my late 20s and early 30s, then all the young 20-somethings, and I guess the early Millennials – the earliest of the Millennials – took over. Ryan Phillippe, and Timberlake, and all these guys came up.

So, caught in a generational sort of wasteland has been an interesting way to forge a career. And plus, I’m a unique looking guy, so I’ve really had to be the salmon that has to swim extremely hard upstream to even keep working in this industry. And I love it, I love working, but I will not tell you that it’s easy, that’s for damn sure.

TrunkSpace: You mentioned “The Frighteners” earlier. We were all chatting about that film internally here, it being October and all, and the consensus was that it is an extremely underrated film. Had that been released today, particularly with the way that tastes have changed and the horror/comedy hybrid film genre is more accepted, it might have had a completely different lease on pop culture life.
Busey: Oh true, yeah. This movie “Dead Ant” that I did, it is wholeheartedly what “The Frighteners” was going for back in the day. It is comedy and horror combined, but I remember at the time, I got a lot of criticism because critics didn’t know how to interpret watching a film that had comedy and horror. It was like, taboo.

TrunkSpace: And when it opened, it was up against “The Nutty Professor,” so you’re automatically losing half of your comedy-loving audience to that film.
Busey: Yeah, exactly. And how do you market that? But I think today’s audiences, I think with the internet and everyone being so involved and connected on the World Wide Web that we’ve got going, I really do think that people are certainly not as close-minded and a lot more accepting of multiple genres mixed together. Because quite frankly, when you sit down and you get on YouTube, and start bouncing around, there’s a million different things going on within five minutes.

TrunkSpace: And at the end of the day, life is all things. Life is not one genre.
Busey: Certainly true. And that was one of the things that I was bummed out about when “The Frighteners” didn’t do so well. It was panned by the critics for being funny in the beginning, and scary at the end. It’s like, this is a good film – its own unique entity.